NOTE: Cozumel was our last pre-pandemic port of call back in February 2020.  Today, we are at the International Pier.  Usually, when we dock here, people are disembarking in droves and heading for the vendors and restaurants.  That is not the case today, even though there are several ships here today (though not as many as usual). 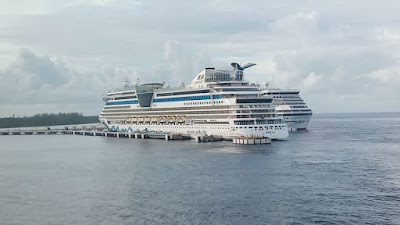 The rain we experienced on our last two stops followed us here – it was raining as I went to breakfast in the Oceanview Café.  I had one of my usual choices – plain pancake with cottage cheese and sour cream plus orange marmalade. The scrambled eggs looked good so I had a small scoop of that, as well.  Breakfast continues to be the best meal of the day (as unchanging as it is).  I was up early enough to see a beautiful sunrise - 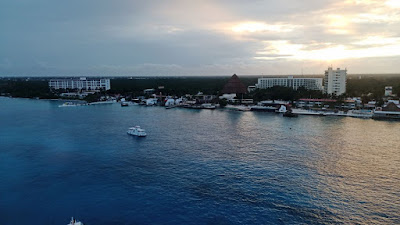 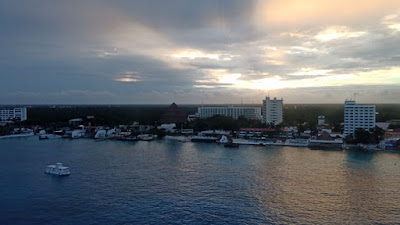 I also saw the pilot boat that had dropped off the person bringing in the ship. 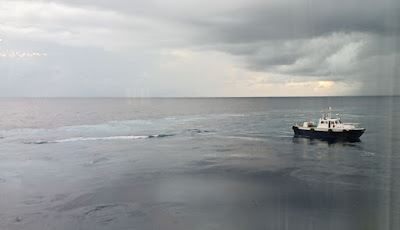 When Ellen got up, we both went to Eden for their breakfast – I had a small bowl of their steel-cut oatmeal and a slice of banana bread.

We had a good time last cruise watching a movie in the morning up in the Rooftop Garden – today’s movie was “Pirates of the Caribbean: Curse of the Black Pearl”.  I watched the whole movie without realizing that 13 years ago, I saw this movie.  I simply didn’t remember much of the movie – just little scenes that looked familiar.

We had lunch in the Oceanview Café – the Cosmopolitan Restaurant and Eden are closed for lunch on port days.  We even saw the Cosmopolitan Hostess, Olga, working as a “suit” in the buffet.  I had a salad and some tuna salad and a slice of pizza (OK) and Ellen had some trout and salmon that could have been warmer.

After lunch, we went back to the Rooftop Garden but when the shade started disappearing and the music became too much, we went to our stateroom to relax before dinner.

We had set up three reservations in a row for the Normandie Restaurant mainly because it has good standard items and some nice rotating items.  Don’t have to list meal items anymore since we have gone through the available items several times.  For the record, the Lavender Halibut is probably the best fish item on the menu of any of the restaurants; the crispy fried mushrooms, the potato and onion “knish” and fried brie are good starters along with the triple blue cheese flan.  Apple pie a la mode and NY cheesecake are winners every time for dessert.  And if you have time remaining the coffee is very good.

Tonight's headliner is comedian Rich Aronovitch – a Canadian born Southern comic (now based in New Orleans.  Rich was terrific- one of the best acts we’ve seen on a ship.  He sparred with audience members who came in late and people who were on their screens during the show.  But, when not doing that, he was genuinely funny. 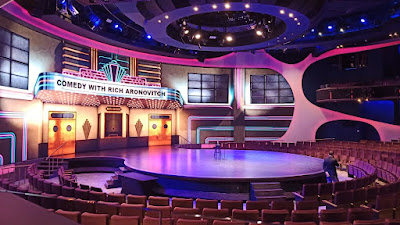 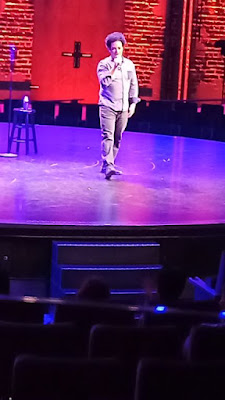 Lauren gave me a great plug after the show – she is the best cruise director in that regard.  She is very supportive of the Enrichment Program.

We didn't catch all of the Art and Music Show in Eden last cruise so we went a second time - this time, we sat on the second level so we could see everything.  The acrobats and aerialists did their thing - all very interesting.  We stayed almost to the end. 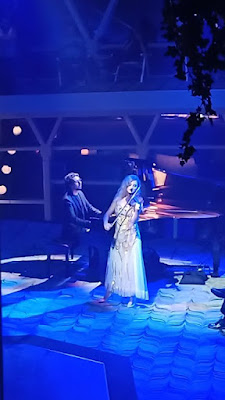 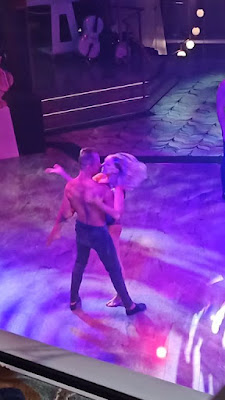 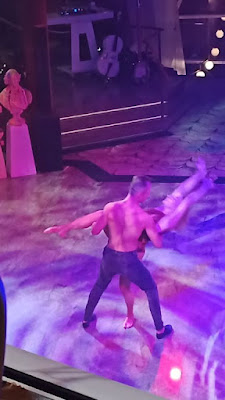 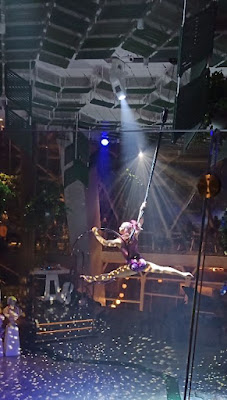 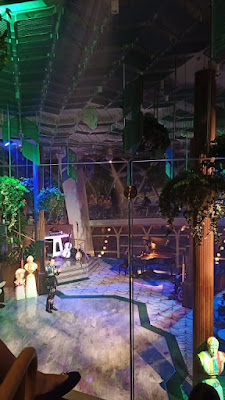 After the show, we went up the Oceanview Café for some dessert, which we want to have on the back deck.  It was drizzling so we couldn’t do that.

Back to our super comfy stateroom.

Whatever scourge I have is getting somewhat worse (coughs and super sneezes).