A good night's sleep, I think.  The seas look a little bumpy and the weather looks a little ugly as we make our way back to Port Everglades. 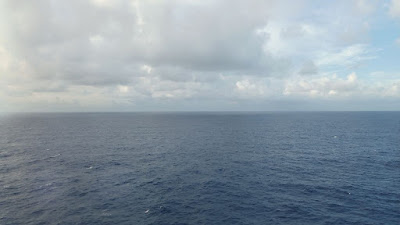 Another 9:15 AM talk in the theater, so another crack of dawn breakfast in the Oceanview Café.  This morning: Plain pancake with the fixings and scrambled eggs – I wanted a fried egg but there was a line.  I’m guessing that some folks didn’t move their clocks back so they think it’s 8:00 AM instead of 7 AM and thought they were late for breakfast.  I brought Ellen her usual breakfast of lox, cucumbers, soft/hardboiled egg, and fruit along with hot tea.

My final talk – “Forensics and History:  Identifying America’s Fallen Heroes” – pulled a very nice audience (the biggest of the cruise and estimated at about 250 – 300 – based on the fact that the Theater holds 900 passengers).  Good round of applause at the end and nice comments from attendees.  I did get one constructive comment from a Vietnam vet and that was that the conflict didn’t officially end until 1975 (I had a graphic in my talk that I got from CILHI that had the ending date at 1973).  I’ll make sure I correct that the next time I give this talk. 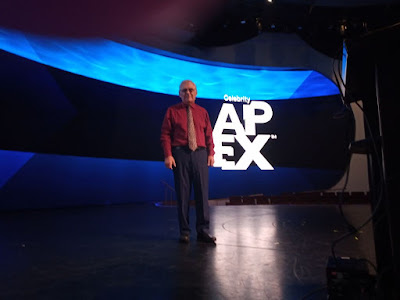 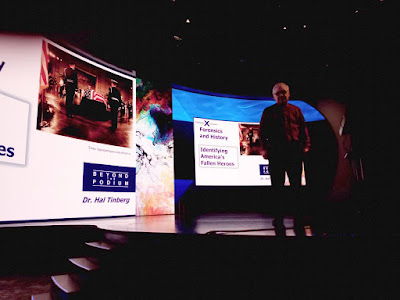 After the talk, we went to the Cosmopolitan Restaurant not to eat but to get tested for COVID-19.  Continuing passengers were required to have a negative antigen test before being allowed back on the ship.  The tests were scheduled via smartphone (using a QR code sent to us by Apex) so there was no waiting.  We showed our Sea Pass cards and then showed the testing crew each of personal QR codes containing our personal information.  The test, Abbott BINAX, takes only a few minutes to run and we both got our negative results via email within the hour.  Very smoothly run process.  We found out later than only one passenger came up positive and they were not from the US.  That person was tested because international passengers needed a negative test to fly home.

We went to the Oceanview Café for lunch and were surprised to find that it was a special buffet today (there was nothing in the Program).  Ellen was able to get freshly sliced lox right from the fish.  I had a nice salad along with some pizza but we both went a little crazy and tried many of the decorated cakes. 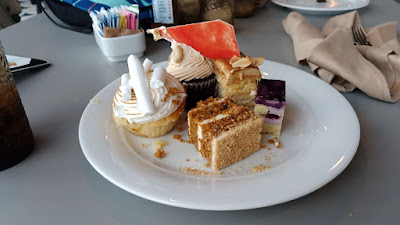 I should mention that the salad bar on this ship is really good and moves along well despite (or maybe because of) no self-service.

After lunch, we found nice loungers in the Solarium – I opened the window near us and we were treated to a wonderful breeze for the whole time we were there.  Just like being at the beach.  Maybe because of distancing, etc., only a few passengers have approached me to tell me they liked the lectures.  But the guy in front of us did and he also said the best I did today was to open that window and let some fresh air in.

Tonight, dinner was at the Tuscan Restaurant.  I had the cheese and spinach turnover (small but good), the Tuscan Minestrone (OK but different), and the Tilapia Putanesca (it was OK).  The service was a little slow tonight so we passed on dessert and went to the Theater early to get our favorite seats for the final Production Show – “Crystallize”.  The theater was packed for this show – I think people went to the early show because they had to pack later.  The show was filled to the brim with special and lighting effects. The show used a second reflective screen in the shape of a tube that was lowered from the ceiling. It also featured a number of aerialists.  The story was difficult to follow and the songs were actually taking a back seat to all of the lights and effects.  We stayed until the volume got too loud for us.  Here are the pics from the show. 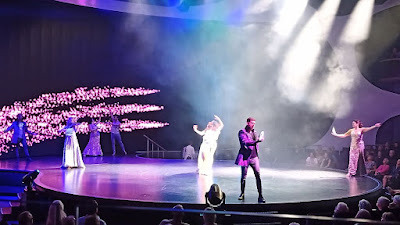 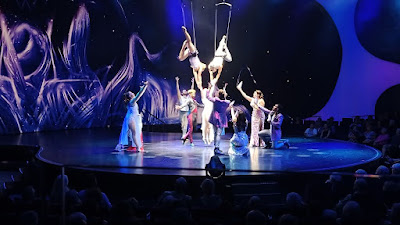 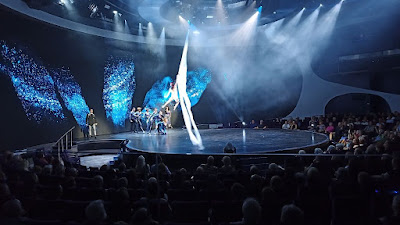 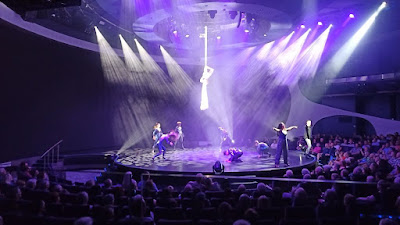 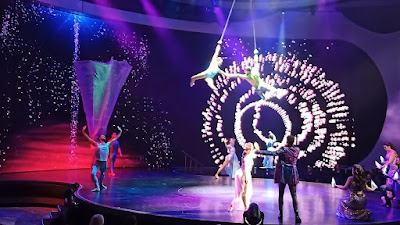 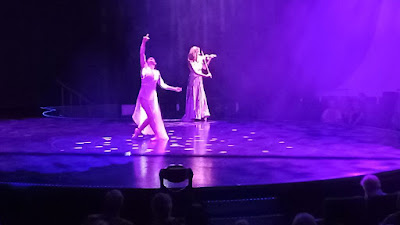 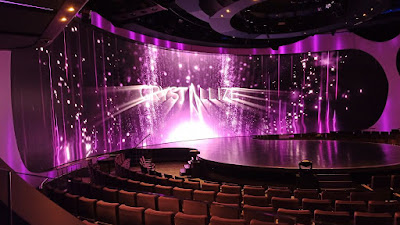 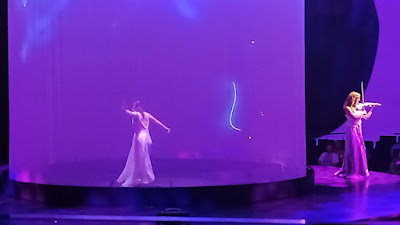 It didn’t take long since the hanging stuff would not have to be packed.

We relaxed the rest of the evening because I had to be up at 6:00 AM to get ready for our disembarkation.