Up on time and in the Oceanview Café by 6:00 AM.  They had their regular menu available so I had my delicious usual breakfast in my usual corner location.  Not really crowded this early in the morning. I brought Ellen her breakfast as usual – no need for her to deal with the folks up in the Café.  I watched the sail in to an early morning Fort Lauderdale. 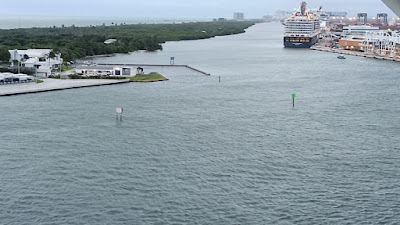 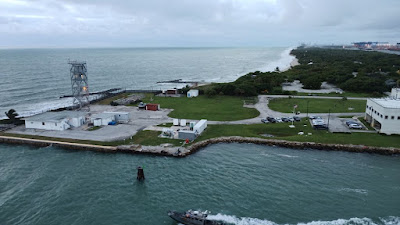 We went to the Normandie Restaurant and we were indeed the last people called.  On the way out, we had a chance to say goodbye to Lauren and Darren (I had left them a thank you card as well).  We walked the long mile to the facial recognition booth – this time, the cameras didn’t recognize either of us so we had to speak briefly to an immigration officer.

Once out of the terminal, I called our hotel and asked them to send the shuttle.  The shuttle actually came when promised and we were off to the hotel where we would hang out today.

The hotel, Ramada by Wyndham Fort Lauderdale Airport/Cruise Port (State Route 84) did look familiar – turns out we stayed here on the last trip before the Pandemic.  The place was a zoo with the lobby full of people waiting to go to the port and the few of us, who were waiting to get a room.  We were at the hotel about 9:30 AM and the rooms wouldn’t be ready until around noon.  The hotel required masks indoors but since this was Florida, compliance was 50 percent at best.  We went out by the Tiki Hut and pool to get fresh air.  There were a couple of smokers out there and we tried to avoid them; there were also intermittent showers so we tried to get under a pool umbrella to stay dry. 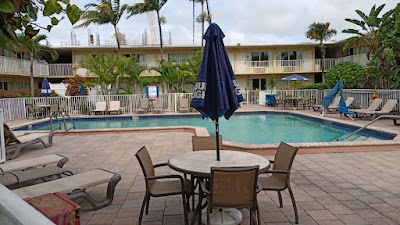 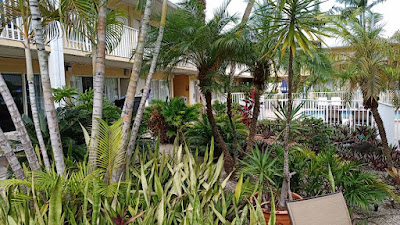 While waiting, we made reservations for an 11:00 AM shuttle ride to the airport tomorrow (complimentary).  Eventually, we got our room, Number 202, and we put our stuff in the room.  We basically stayed in the room, which was comfortable and away from the smoke.  The room, on the surface, looked decent but there were a lot of things that needed repair and touch up.  Yet, the room did not smell and the beds (we had booked a King but took two Queens to get into a room sooner) were comfortable.  An added bonus:  I was able to watch the UCLA-SC Football game (on mute, of course).

In the evening for dinner, we ordered takeout using suggestions and menus from the front desk.  We ordered from Doughboys Pizza (delivery) – Pizza and two sodas plus delivery plus taxes plus tip - $28.90.  The pizza arrived sooner than 45 minutes and it was really good.  We put the rest in the fridge for the airport tomorrow.  The hotel does have a restaurant of sorts but we just didn't feel comfortable eating there after checking it out.

When we were here last, the place was really noisy.  This time, the place was quiet - perhaps, there weren't as many people staying near us on the second floor or perhaps, people were just being considerate.  Anyway, that was a bonus.