Cruise Number 1 is complete.  Successful in weather, seas, cabin assignment, and presentations.  Because, we didn't get off the ship in any of the ports, I never got a picture of Celebrity Apex for this log.  I had to resort to this: 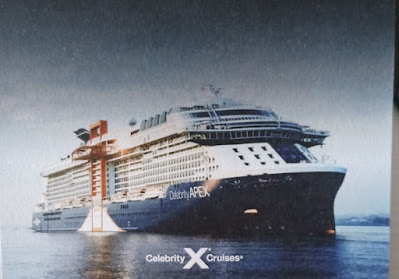 At my early morning breakfast at 6:00 AM in the Oceanview Cafe, I was treated to both a wonderful sunrise trying to peak out from some storm clouds 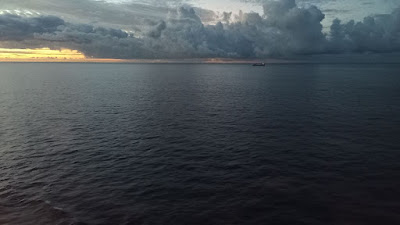 as well as a view of the sail in - as expected there were many ships here this morning including the newly minted Odyssey of the Seas (which we saw here when he started this voyage). 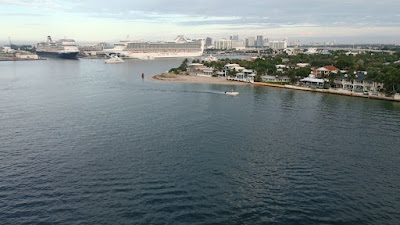 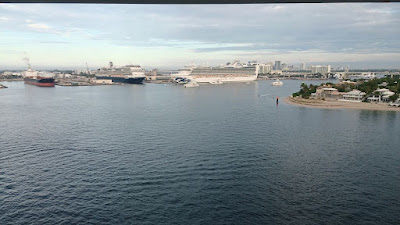 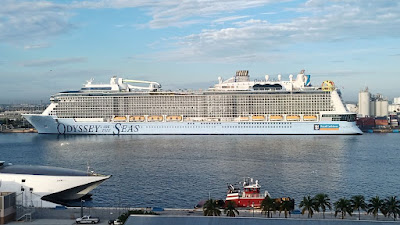 I expected a huge mob of folks at the Cafe on disembarkation day, but it was relatively orderly and I even managed to get my favorite seat in the corner.  I had the usual waffle based breakfast but there was no sour cream to be found (two of the servers went looking but I couldn’t wait any longer to eat).  I brought Ellen her usual lox based breakfast and we got ready to meet at the Cosmopolitan Restaurant at 8:30 AM – the gathering place for all back to back passengers.  On our way down to the Cosmopolitan I picked up a sweet roll and sugar donut from Cafe al Baccios.  The Cosmopolitan also had sweets and coffee for the passengers. When we got there, the ship’s agents checked our passports and vaccine cards (and photographed them as well).  We also were given new Sea Pass cards with our new rooms.

We had to stay in the restaurant until all of the passengers got off the ship – a process that took over an hour.  We then marched as a group down to the terminal, got scanned by a facial recognition camera, and then marched back to the ship. This gave me the only opportunity to get an exterior shot of the ship (from the gangway as we got back on). 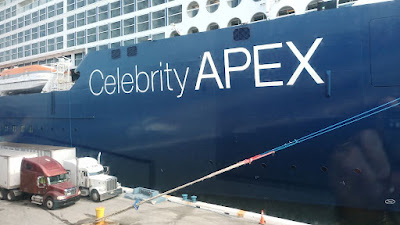 We were then photographed for identification purposes.  Once that was gone, we went to our new room, which is the same room we had on the first cruise but on Deck 12 very aft. 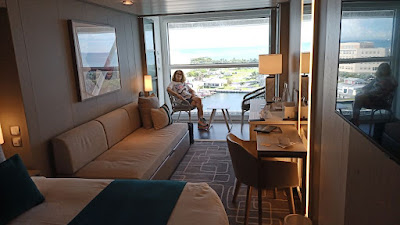 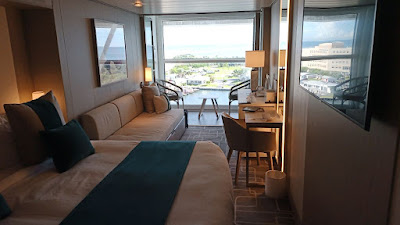 Our bags were not there yet but we did drop off my computer bag and put stuff into the safe.  I then went down to Guest Services to get my card registered as a BTP speaker.  I didn’t look at the new card carefully enough because the agent had given me a card for the cruise just completed (another trip to Guest Services corrected that).

We are again in a Concierge Cabin so we went to the Tuscan Restaurant for a special lunch.  The salmon and pasta we had were good and the chocolate cake was too good.  We stopped at Guest Services again and made dinner reservations for the next two days with the dining agent.  Tonight we are the Cyprus at 5:30 PM and tomorrow, we are at the Normandie at 5:30 PM as well.  As soon as my WiFi account is set up, I’ll be able to make reservations on the Celebrity app.

When we got back to the room, we did the Safety Review on our TV set.  Our bags and clothes had arrived and Ellen put them away.  We checked in at our assembly station, the Cosmopolitan Restaurant and had our Sea Pass cards scanned.  The lifeboat drill of the future, here now on Apex.

There are many more people on this segment (we were told the ship was full) and a good way to tell is ride the elevators.  On the last voyage, we rode alone in the elevator at times – now the car is full of mask-less people (except for us).  There are a few people who are wearing masks around the ship – I’m guessing that these folks are not from Florida.

We watched the sail away from our cabin – we are on the port side so we got a nice view of the condos and then the shoreline of Fort Lauderdale.  The port was crowded with pleasure boaters so the USCG Gunboats were busy shooing people away from Apex as she started her departure. 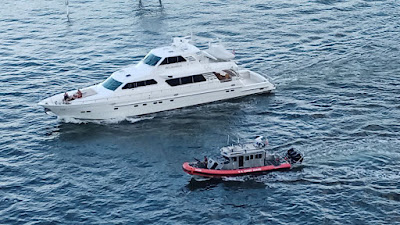 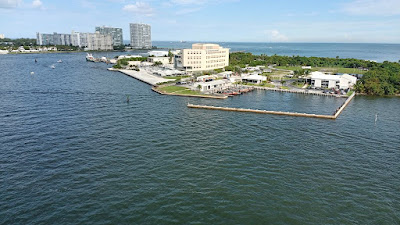 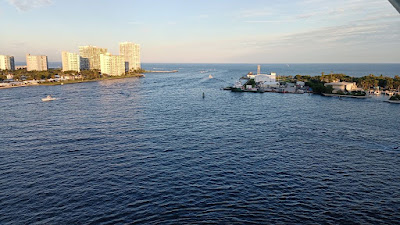 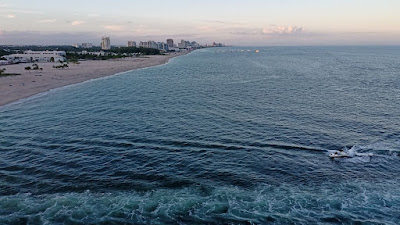 We went down a little early for our dinner at the Cyprus Restaurant. We again got a table for four for just the two of us.  From our window seat, we could see the sunset over the coast of Florida. 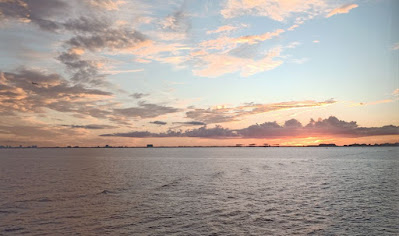 I ordered the Taverna Salad (it was different this time as it came with dressing and giant chucks of feta cheese on top – I used some of the feta as a spread on my French bread) - really good overall.  We both had the Mushroom Soup, which was OK but a little thin.  I had the broiled salmon, and it was a little undercooked, but the Hollandaise sauce was good as were the mashed potatoes.  Ellen had the spinach and ricotta ravioli, which were a bit watery inside.  I had a really good dessert – a chocolate cherry trifle with devil’s food cake.  Ellen had the apple pie with no ice cream (OK).  I actually had two cups of decaf coffee as we were not intending to go to the show tonight (Jason, the magic man is back).

Final stop of the night was our room for quiet and peace.