Slept well.  The room was very quiet.  The desk clerk told us yesterday that the room was part of a block of rooms sold to a group.  But our room was so quiet it seemed like we had no neighbors.

The breakfast was pretty much the usual La Quinta fair.  I had a bowl of Raisin Bran, a made to order waffle, some scrambled eggs (powdered? I hope not).  The food was pretty good.

Based on information from the hotel, we decided to take an Uber to the port – an UberX: Fare: $27.73; Tolls/Surcharges/Fees (?): $2.20 - $29.93 Total (plus a $5 tip) or about what we pay to go to the airport from our house.  The driver was polite and semi-careful and he dropped us off right at the port where the porters await your luggage.

We checked in quickly with the Port Agent – our credit card was registered during on line check-in so that cut the wait time.  We were on the ship in no time.

I got some very nice pictures of the city including a panoramic shot of Baghdad by the Bay (not as complimentary a term as it was in the past).

I also took what has become an iconic pose - Ellen on the back deck.  In this case, the vast Pacific Ocean has been replaced by the equally iconic San Francisco skyline.

We have been in many different kinds of cabins on Grand Princess.  This time, we are in an outside officer's cabin. However, finding our room, 7125, proved to be challenging as several crew members did not know where it was.  We even ran into Steve Cauoette, the comedian, who is staying in the same area and he tried unsuccessfully to find our room.  Finally, an officer helped us find it – we had walked by it several times and didn’t notice the number.  The room is on Deck 7 forward starboard – through the doors to the crew area – make a left and it’s the first cabin – it’s a very nice cabin with a decent bed and big window – it’s big with lots of shelves and storage and the bathroom is pretty big compared to other speaker rooms.  The room does use a real key – the sea pass card is only for charging and entry to the ship. 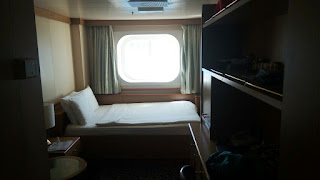 We had lunch up in Horizon Court, which was super-slammed.  All I wanted was a salad and there was no lettuce – I was told that there were technical difficulties with the lettuce.  Finally, the actual chef brought me my own bowl of iceberg lettuce for a salad.  There are hand washing stations at both ends of the buffet and they are manned by watchers.  We saw the same thing for the whole cruise on the Island Princess.

We went to the wrong venue for the lifeboat drill (Vista Theater instead of the Crooners Lounge – we should have read the letter in the room and/or known better from past experience).  We were scanned in so I am still confused as to what happened.

I met with Mike Witte, the Entertainment Manager, in his office by the theater entrance.  Mike had a totally different list of topics than I had (and had sent in to Princess).  No clue as to what happened so I handed him the list I had and he said he would go with that.  I was going to give all five talks – some in the Vista Lounge and some in the Princess Theater.

The sail away is always beautiful - under the Golden Gate 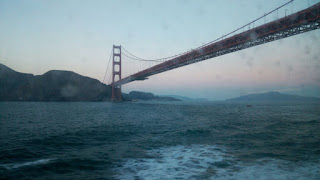 and this time, a view of Alcatraz of the back deck. 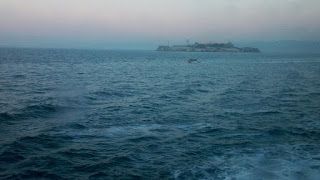 We had dinner in the Michelangelo Room (one of the TMNT rooms).  It was the usual first night chaos.  After a crazy wait, we got our salmon and Fettuccine Alfredo – the food was good.

Steven Campbell is the Cruise Director and he told us that there are two thousand Americans on board (of the 2400 passengers).  While that may be true, many of the US passengers are Chinese folk from the SF area and are not necessarily English speakers.  Steve said there are 12 Chinese passengers but many more folks are speaking Chinese.

Steve Cauoette is the headliner for Showtime tonight.  His act was a little different (no girlfriend with a mustache) and was OK.  Much of his act is chatting with the audience and giving late comers a standing ovation.

Even though it is our first evening, the clocks go forward tonight.