The ship is moving.  I got up early and confirmed we were sailing. 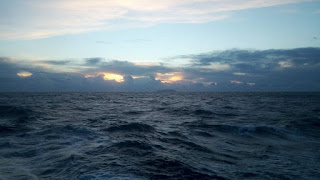 We are heading to Civitavecchia with a arrival time projected to be 2:30 PM.  The skies are mostly blue but the waves are big and the sea is not that smooth. 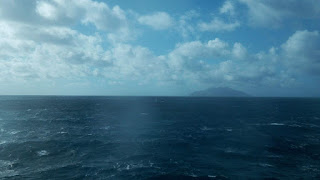 Our position indicated we were making good time.

It didn’t feel like we were 900 folks lighter as I had breakfast up in the Oceanview Café.

To fill in the extra day – there is a movie at 10:30 AM and I am going to do my “Extreme Forensics: Non-Human DNA” talk at 12:30 PM – seems that Sam was trying to get in touch with me while I was looking for her.  I did the presentation in the theater to about 20 folks (some regulars said they didn’t know about it even though Paul did make an announcement).  My clothes were packed so I was on stage in convertible travel pants and crocs.  Just trying to help out. 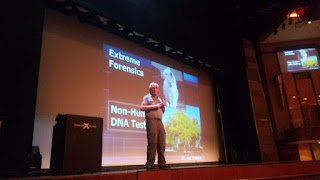 Our ETA in Civitavecchia is about 2:30 PM and it took a while to pull alongside.  I got a nice shot of one of the ferries, decked out in Superman livery. 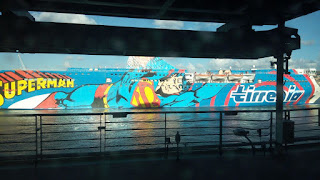 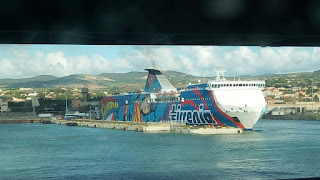 Passengers, including us, lined up at the gangway on Deck 4.  Celebrity provided complimentary bus transfers to Fiumicino Airport.  We got on the very first bus and in about 40 minutes we were at the airport.  We purchased First Class tickets on the non-stop Leonardo da Vinci Train and in 32 minutes were in Roma Termini Station.  We walked around the corner of the station to the taxi line – we paid 20 Euros to get to the Hotel Napoleon (the hotel said it would be no more than 12 Euros but the cabbie said something about bag charges).  We were, truthfully, too tired to debate the issue.

Using a convoluted route and driving like a Rome Cab Driver (in a cab with non-functional seat belts), we got to the hotel.

The hotel is a magnificent structure contained within several shops.  We checked in with very professional desk clerk, Roberto, who explained how the hotel worked.  The porter took us to our room – using two separate very small elevators.  We are Room 306 – a very nice room with a balcony overlooking the courtyard – this should result in a quiet room.

It was our lucky night because on Tuesdays (and Thursdays), there is cocktail hour complete with complimentary drinks and snacks.  I got a Bloody Mary and Ellen a Coke Zero (found out later that the cocktails at other times are 9 Euros and up). 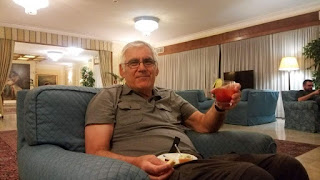 There were some lox and cream cheese snack as well as crostini with beans and cheese (surprisingly good).  After the rush was done, we asked the bartender for some mineral water and he gave us two of them gratis.

Roberto, recommended two Thai Massage places in the area and I made a reservation for both of us for tomorrow at 6:00 PM (50 Euros/hour).

We tried walking down the street near the hotel but everything was starting to close (8 PM) so we went back to the hotel and hung out in our room.