La Spezia is a seaport in the Liguria region of Italy.  The city, located at the head of the Gulf of La Spezia, has a population of 94,000 people.  La Spezia played an important role in post WWII history - after the liberation of the concentration camps, between Summer 1945 and Sprint 1948, several ships, carrying 23,000 holocaust survivors left La Spezia secretly for the Palestine Mandate (Israel).  In Israel today, La Spezia is called "Shaar Zion", the Gateway to Zion.
It is clear why the Captain chose La Spezia as a port in the storm.  The city is located at the top of a gulf and in a sheltered harbor. 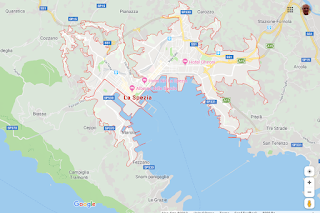 This should protect the ship from winds and other weather conditions.  You can see La Spezia from the deck of Constellation. 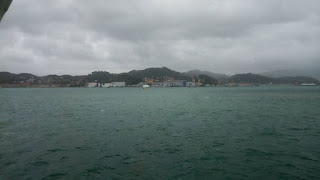 The ride to La Spezia was smooth in spite of all of the weather in the area.  We have been here before but I don’t remember much except that we tendered in and tendered back at night after visiting Florence. We did not spend much time in La Spezia.

It has been a while, but this morning, I was back in the Oceanview Café hoping to have my signature breakfast; I could not find the cottage cheese (I was told later than they had run out of cottage cheese).  Pancakes and eggs were backups.  There were few people up there this morning.

We are not touring today - a long, rainy ride to Florence and then a damp day in Firenzia just didn't sound all that great.  Instead, we are going to tender into town and check out La Spezia. 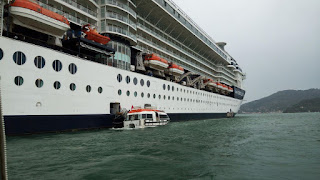 I expected a rocky tender ride into the town but it was surprisingly smooth – it took about 10 minutes and the drop point was just a few hundred meters from the main street.  I was able to get a pretty good shot of Constellation out in the harbor. 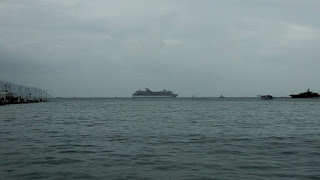 We are currently anchored – the two piers are occupied by Queen Victoria and Costa Magica.  The plan is to take the berth vacated by the QV at 7 PM tonight. 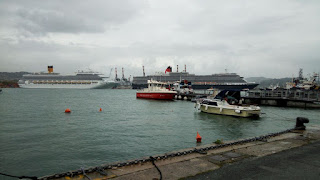 Actually, La Spezia was a pleasant surprise.  The main street is lined with trees 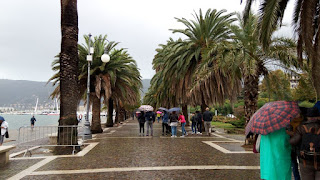 and just behind the street by the harbor there are relatively new buildings.

It is a miserable day - as you can see from the gray and drizzly pictures.  Ellen is in her rain gear and I'm wearing shorts (clearly hoping for the weather to clear). 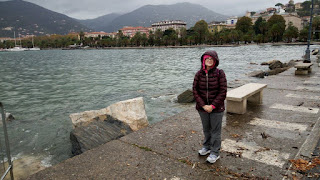 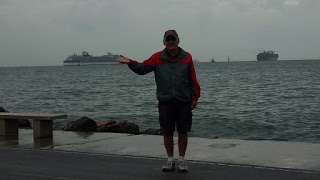 You have to go a few blocks away from the bay to find any cafes but they look in good condition.  Not too many shops are open on this nasty day.

At the top of the narrow streets, 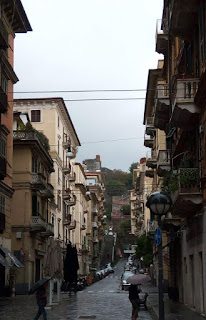 you, can see the Castle of San Giorgio.  The castle dates back to the 13th and 14th centuries and has been recently restored.

The marina is filled with some impressive boats including some serious yachts including this awesome black yacht. 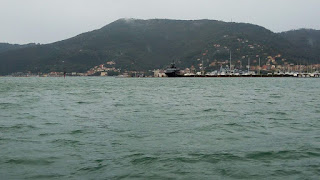 Continuing our walk, we come across a simple but poignant Holocaust Memorial, 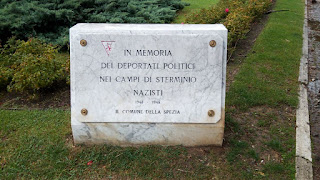 as well as a monument to aviators (you can tell from all of the planes on the monument). 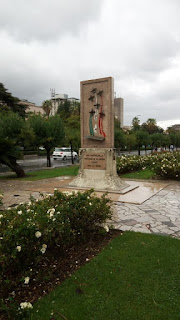 After a few blocks, you are in the hills of La Spezia and behind that are pretty good sized mountains speckled with nice homes.  With the light rain and gray hues, La Spezia is not at its best today.  It probably looks like a small version of  Malaga, Spain on a sunny day.

With the rain increasing in intensity, we headed back to the tender port and after a very short wait, we tendered back to the ship. 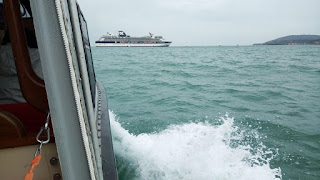 We spent the afternoon in the Solarium.  I am reading “The Rembrandt Affair”, book number 10 in the Gabriel Allon series by David Silva.  The book so far is depressing as it is all about Nazis.  Hoping that they will get theirs by book’s end.

My fourth presentation was originally scheduled between tonight’s two shows in the Reflections Lounge.  When the revised Daily Program for La Spezia was printed, the talk was now in the Theater.  We would not have noticed if we hadn’t looked once again at the Program.


After dinner, we ventured outside and got a picture of La Spezia at night as well as a shot of the QV departing.  Constellation can now slide into that berth for the night. 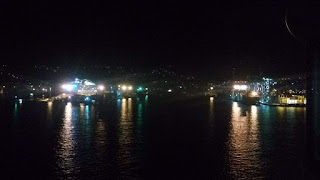 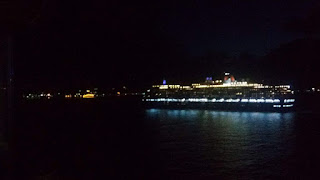 Tonight’s performer was Pete Matthews.  His luggage had not arrived so he did his entire show juggling and twirling stuff he found on the ship and/or purchased in town.  I like his comedy better than his juggling so I thought the show was pretty good.

Before the evening show, the Captain announced that we had docked and that Constellation would be spending the night in La Spezia and assess the weather conditions tomorrow.

The announcement plus the fact that Pete’s show ran long only gave me a few minutes to set up.  The AV crew was cleaning up Pete’s materials and didn’t get to my set up until pretty close to 8:30 PM.

There was a problem with the projector and then the headset mic didn’t work.  Now, “Forensics and History:  The Lost Dauphin of France” was going to have to be no longer than 40 minutes (anticipating this, I deleted about 10 slides while on stage - second photo below).  After being introduced by Sam, I took her hand held mic (still wearing my headset hoping it would come alive). 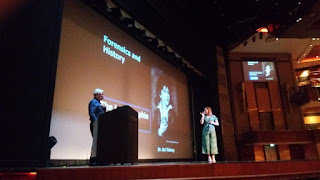 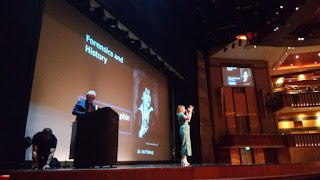 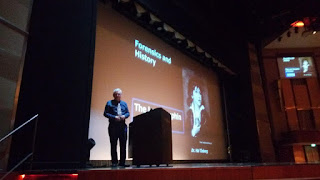 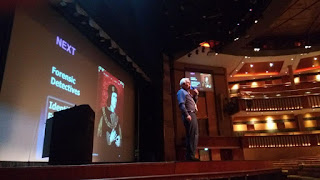 Well, I flew through the talk and it felt like it – I might have established a minimal connection with the audience and that my slide transitions were sloppy.  Because of time, some information was not imparted. Not an acceptable effort in my opinion.  That's showbiz.

The ship's public areas were cold so we went to the room.