A gray, cloudy, but warm day in Cadiz, Spain.

Cadiz in an ancient port city in Southwestern Spain - the city is home to the Spanish Navy.

Cádiz is also known for its watchtowers, which were popular from the 18th to the 20th Century. These towers were used to monitor the ships coming in to Cadiz harbor, not so much for defensive purposes but to signal the arrival of shipments.  Watchtowers of Cádiz are examples of Andalusian architecture, with North African aspects. Near the end of the 18th century, Cadiz had 160 watchtowers; today, 126 are still standing. 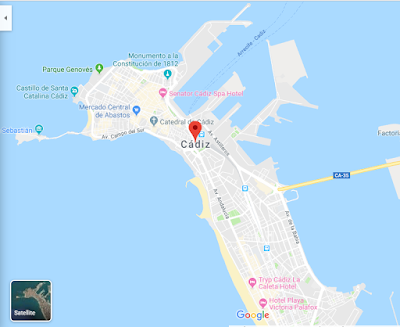 Today, we are going to explore the city on our own.  The city is relatively narrow - you can walk from the harbor to the Atlantic Ocean easily.

There were a number of very interesting installations right near the port entrance: 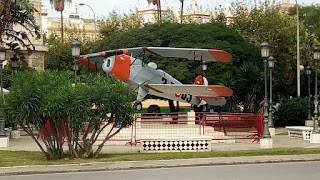 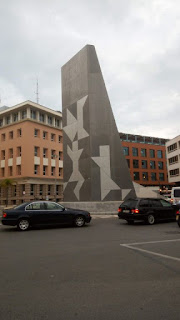 And a huge padlock 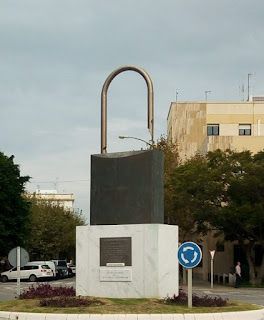 On our walk, we saw examples of Cadiz architecture 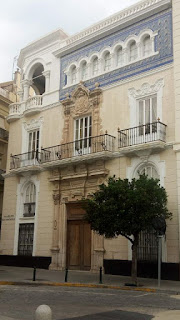 As well as some of the city fabled Watchtowers 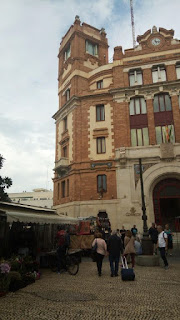 We found the Cathedral of Cadiz, a Roman Catholic Church built between 1722 and 1838. 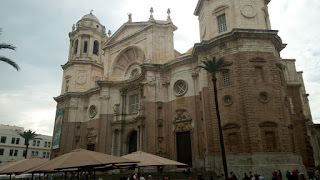 We also spent some time in the Plaza de Espana, with its impressive monument commemorating the Constitution of 1812.  There are equestrian figures and a statue of Hercules (representing Cadiz). 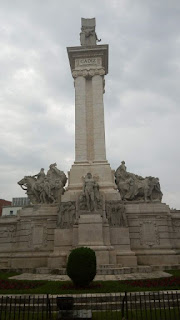 We eventually made it to the Atlantic Ocean and the beaches.  When we were here in the 1990s, there was a statue on the beach and Ellen struck a similar pose.  A painting of that still hangs in our place.  This time, we could not locate the statue.

I did get some nice shots - despite the grayness of the day - of the Atlantic Ocean coastline North and South. 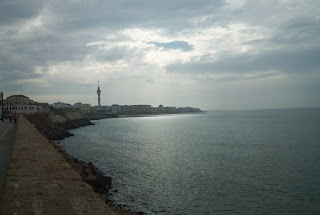 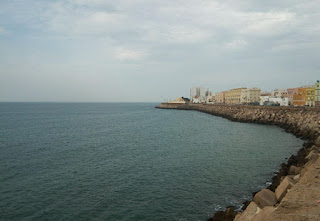 On our way back to the ship, we found a delightful little store selling Cadiz items (we wound up buying a set of plastic cups for the kids) as well as Cadiz versions of famous superheroes (the logos on their costumes were changed to avoid trademark issues).  These paintings and other objects were done by a local artist - we wound up getting a "Superman" magnet.

Getting back to the ship was relatively easy even though we did log quite a few steps.

We watched the sail away but the dull gray of the day really took the pzazz out of the picture. 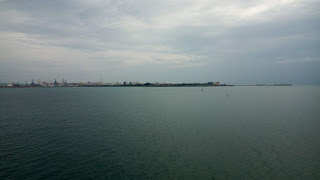 We were finally able to get a table for two in the San Marco Dining Room.  But it was really a linear table for six since the three tables were only about four inches apart.

The Headliner tonight was ex West End vocalist, Nick Page.  Nick is a terrific singer but his shows tend to be too loud.  Not so tonight.  He was great and his song choices were perfect.  Very enjoyable.

We gave the duo - Two on a Boat – a shot in the Café al Baccio.  They had a peculiar singing style and we didn’t have the best seats.  So we migrated to the Rendezvous Lounge to catch the jazz band, Golden Vibes.  I believe they are from Argentina.  The vocals remind me of Astrud Gilberto mellow and they sound much better when the songs are sung in Spanish.  They are easy to listen to and they are at the correct volume for late evening listening.