From our docked position, the city of La Spezia looks peaceful enough but that is not the case. The temperature is in the 50s outside and the clouds look threatening. 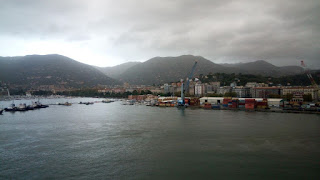 The weather story was all confirmed by an announcement from the bridge that indicated that it would not be safe to go ashore today.  We had planned to visit a nearby spa but it looks like that will have to wait for a return trip to La Spezia.

I had a nice breakfast up in the Oceanview Café – yes, still no cottage cheese (no one made a special trip to the supermarket to get me cottage cheese).

We are going to spend the day in warm and safe confines of the Reflections Lounge. 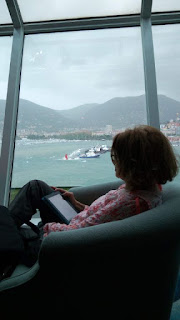 The weather got progressively worse and we watched it all unfold from our viewpoint in Reflections, Deck 11.  In the morning, the first bit of bad news – thunder and lightning.  That was followed by heavy rain.  There are some passengers on excursions this morning and they must be getting drenched.  It almost looked like things would be improving with visibility getting better but the clouds reappeared.

We got lunch in the Oceanview Café and then returned to keep an eye on things on Deck 11.  Then everything went nuts.

The winds picked up dramatically causing all the little boats in the marina to bob like toys. Then super-strong winds (heard they were near hurricane force) started to pummel the harbor followed by an eerie linear fog or cloud that was blown along with the winds.  Visibility went to near zero and the waves were linear from the wind.  Then, it appeared the ship was moving but there was no way that Constellation was going to depart in this wind.  The ship then listed, crashing noises were heard, and the ship started to move toward the boats in the harbor entrance. 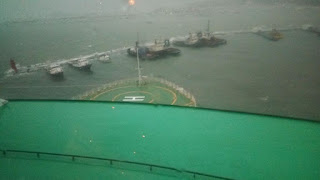 She stayed still for a while (probably due to full engine power) while several tugboats pushed the ship back. 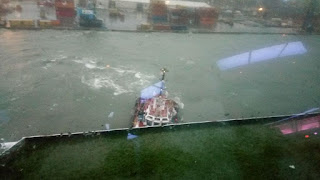 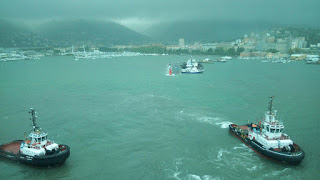 We only found out later that Constellation had broken free from its strings (due to the high winds), drifted backwards and dinged the Costa Magica (all caught on video and now on You Tube).  The ship was finally brought under control.

We were told that the ship would not depart at 4:00 PM as scheduled but would again stay overnight in La Spezia but that the departure time tomorrow was unknown.  The Magica had already transferred all of its passengers to buses headed to Fiumicino Airport and that new passengers would be bused in and board their cruise here instead of Civitavecchia.

My final talk – “Forensic Detectives: Identifying the Famous and Infamous” – is scheduled for the Reflections Lounge at 8:30 PM between the two “Rock City” shows.  Even if the attendance is low, it is still preferable to the theater.  As it turned out, the attendance was good – about 90 percent full.  It all went well and some passengers even told Sam how much they liked the lectures. 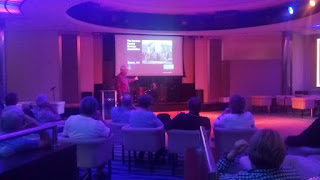 Announcements continued through the early evening – the latest indicated that about 900 passengers would get on buses at 11:00 PM to Fiumicino so they could get their morning flights – this was a 5 plus hour drive.  We found out later that the buses didn’t depart until 1 AM due to clearance issues with the Port Authority.

At about 4:00 AM, I felt a shudder in the cabin and a peek out the window indicated we were moving somewhere.