Our port of call today is Toulon, the gateway to Provence.  I was up early and got a pre-dawn picture of our approach. 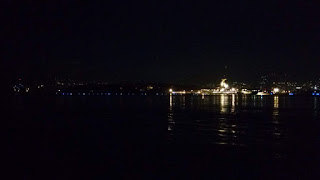 The ship is actually docked at a nearby port, La Seyne Sur Mer – about 8 km from Toulon.  To get to Toulon, you need to take a shuttle boat at $20 per person.  We opted instead to take a tour – actually more economical.

On tour – “Castellet” – is a four hour tour with two hours of free time.  A 30 minute drive through the gloomy French countryside 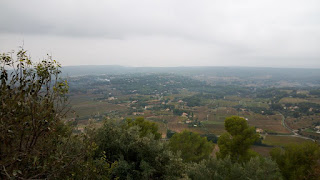 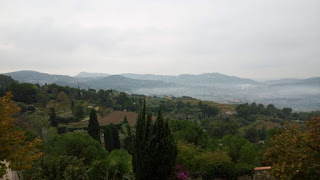 ,
to the medieval hill top village of Castellet (small castle in French and with a population of around 4000 people).  We entered the village through an ornate gate from the 14th Century. 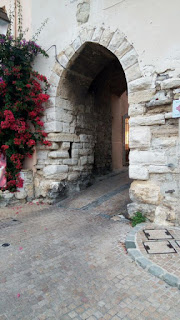 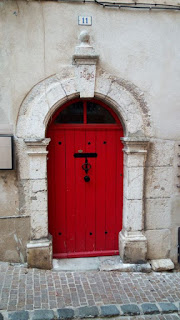 We had a guided walking tour then free time. There is actually a Castellet in this village and I got some nice shots of it. 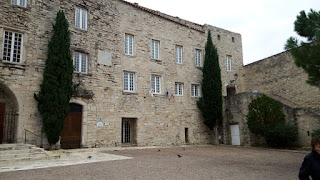 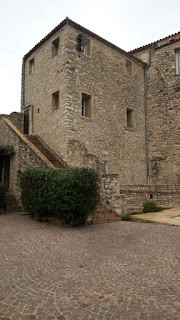 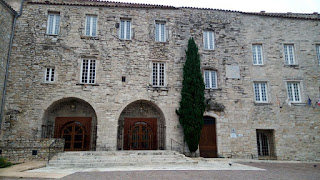 There are also great vistas from the top of the hill (I took some regular shots and a panoramic shot), and convinced a passenger to take a picture of us, as well. 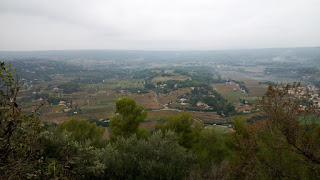 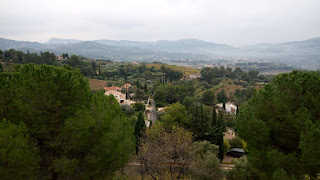 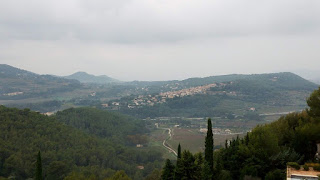 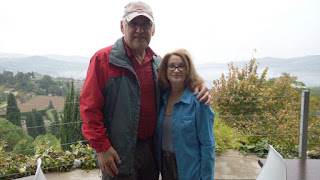 There are also a Romanesque Church and several shops (we did find a place selling Castellet trinkets and bought a "sitting person" doll) and cafes to visit.  One of the shops we visited was a gallery displaying some interesting statuettes. 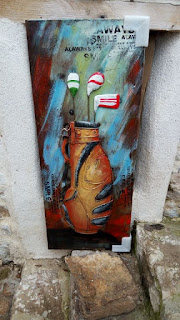 We also went to one of the local restaurants, 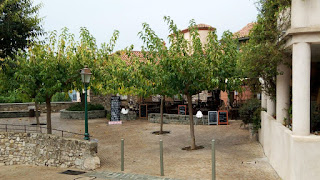 and had a wine tasting (I tried the Rose) along with snacks – gazpacho, focaccia pizza, olive spread on mini-toast plus a special veggie treat concocted just for us – butternut squash and walnut soup (I believe I had two helpings - the restaurant owner was very generous).  It was all very tasty and the timing was perfect as we were getting a bit hungry.  One of our very passengers took our picture. 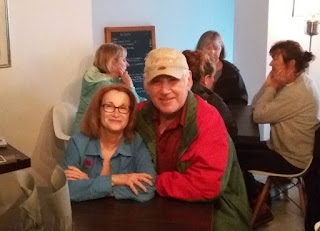 We saw some interesting things on our free time, which we used to tour the village.  These included a monument dating back to 1895, 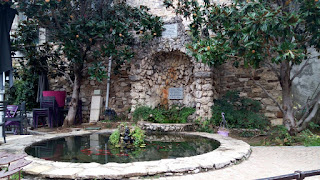 and a dojo, a martial arts studio (yes, in a hillside village in France), 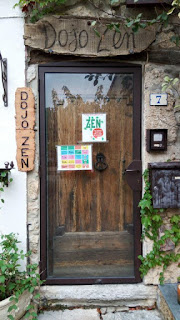 We walked back down the hill, took some pictures of the narrow streets. 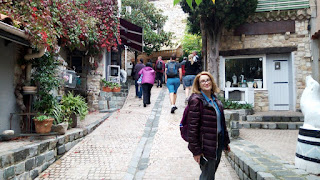 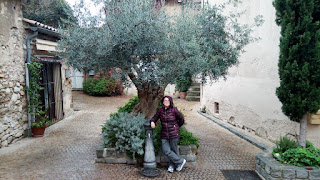 We stopped in a local coffee shop - I had another coffee with crème – this one cost 4.5 Euros (still pretty good - taste not price).  We met another couple on the tour and chatted for a bit.
Our guide had an adorable, 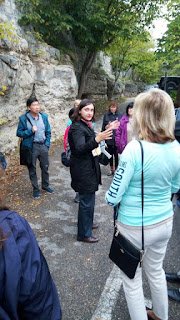 if not always comprehensible, accent.  It was a short but interesting tour.

A short ride back to the port and a relaxing afternoon in the Solarium.

The entertainer tonight was supposed to be comedian/juggler, Pete Matthews, but Pete’s luggage – containing most of his props – never got off the plane with him.  So while they wait for the bag to appear, the “Revolvers”, a 60s tribute band, swapped days with Pete.  We had just seen them on the Eclipse and tonight, they were amped up a bit too much, so we left early.  We found a quiet spot in the Rendezvous Lounge to read and do puzzles.

Before the show started tonight, the Captain came on the PA to announce that both Portofino and Livorno were experiencing adverse weather and that the ship would divert to La Spezia, Italy, which is 55 miles north of Portofino.  All tours would still operate from La Spezia (to Pisa and Florence).

Even though we are traveling East there is clock change tonight – back one hour.  Maybe this has something to do with European Daylight Savings.  I was confused because when I got up and checked the phone, the time had not been moved back.  I called Guest Relations and they said the phone would be corrected once I hung up. OK.