I ordered room service because I had an early presentation this morning.  I got up at 7:00AM and waited for the knock but none came – I checked the door and the order card was still on the door.  I ordered via phone but I was afraid that the order wouldn’t get here in time so I ran upstairs and quickly scarfed down a waffle with some toppings and some scrambled eggs.

I got ready and made it to the Celebrity Theater on time at about 8:45 AM for the 9:15 AM start of “Forensic Detectives: The Search for Jack the Ripper”.  I booted the computer and attached what I could but there were no AV guys in the theater.  At 9:10 AM, I went to Sam’s Office (she wasn’t there) and paged her.  Ellen took the phone while I went back to the theater to explain to the audience what was going on.  Ellen talked to Will and at about 9:20 AM of so someone did appear in the booth.  I ad libbed with the audience until the projectors booted up – I even joked about a playing card I found on the podium that was probably part of Jaimie’s act.  The turnout for the early morning talk was very good – more than a third of the theater.  I ended a couple of minutes after 10:00 AM which means I must have really gone quickly.  The Captain was on at 10:15 AM and there was enough time for him to get ready.  A crazy morning.

It was a totally beautiful day at sea - a good day to relax and read. 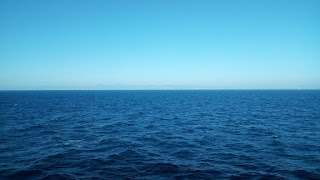 After dinner, we passed on the show and went to see Golden Vibes in the Rendezvous Lounge. 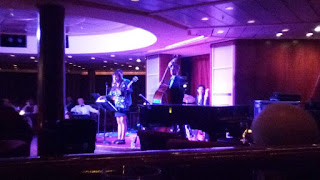 We got a nice shot of the moon over the Mediterranean to round out the day. 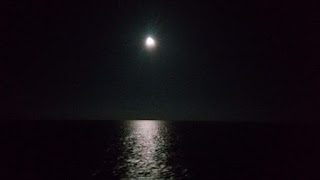