Our first of two sea days – no wake up calls –just rest. 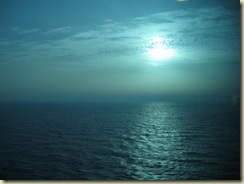 My talk today, DNA Testing: Solving History’s Mysteries, is at 3:45 PM in Celebrity Central.  Another good crowd (200 plus).

The entertainer tonight is Paul Baker, veteran of West End Musical Theater.  His show is great with many of my favorite tunes sung terrifically by Paul.  The best entertainer (maybe a tie with Karen Grainger) yet on a cruise ship. 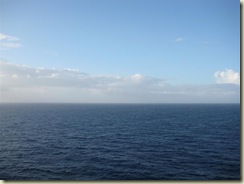 The weather outside is a little stormy but that’s OK because when the brief rainstorm ends, a beautiful full rainbow appears.  It was too big for a single picture but I did shoot both ends.  The pot of gold is underwater. 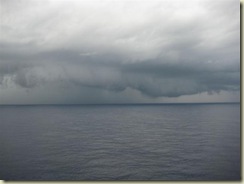 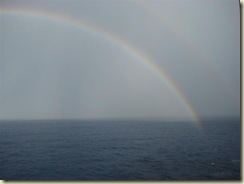 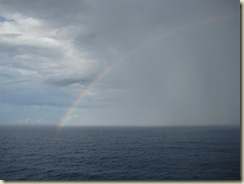 My final talk (DNA Testing: Cold Cases Solved) is scheduled for 11:45 AM in the Equinox Theater. 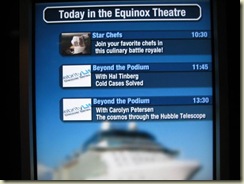 It’s a little close to lunch but the crowd tops 250 (they wouldn’t have fit into Celebrity Central).  I get a good final round of applause.  Successful series.

We are in Messina, Sicily (Italy) tomorrow.