Our second chance in Naples – hopefully, this trip will not end in another Italian ER.

We are on tour today “Capri, Sorrento, and Pompeii”.  At first glance, that looks like a pretty ambitious itinerary.

This excursion is different in that we don’t board a bus but rather a fast boat to the Island of Capri.  The ride to Capri – a little choppy – took about an hour. 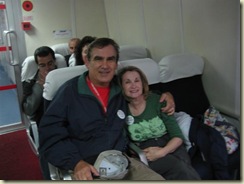 On the boat to Capri

To get the city of Capri, you have to take a Funicular Train.  While crowded, the lines move fast.  The views from the city are great. 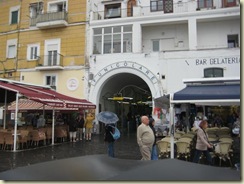 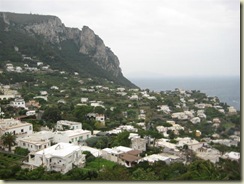 Capri – View from the top

We were pretty much on our own in Capri so we walked around the town. 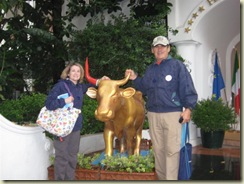 A local resident – a Golden Bull 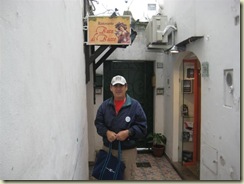 We took the same boat from Capri to Sorrento.  This would be our lunch destination (please, nobody slip and get hurt).  The trip to Sorrento seemed pretty short. 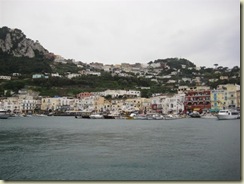 Sorrento from the pier

Our lunch was at the La Fenice Restaurant and it consisted again of the usual faire – Cannelloni, Grilled Veggies, Wine, and assorted cakes (I liked the bread the best).  Not very gourmet (I was hoping for pizza). 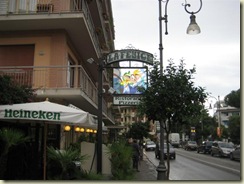 I asked the waiter about their pizza and he said they had the best pizza and I should come back later for a sample.  Sample, I thought, meant free.  When I walked back later (while the tour was shopping), he wanted five Euros for the pizza.  He was unwilling to sell me a slice – all I wanted – so there will be no “best pizza in the world” on this cruise. 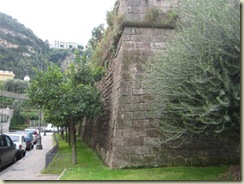 I head down to the main shopping area, where I bought a Sorrento baseball cap for four Euros – a good deal. 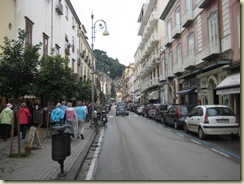 I caught up with my group at the Shopping Stop and he boarded the bus to Pompeii.  On the way, I was able to capture Mt. Vesuvius on a gloomy day. 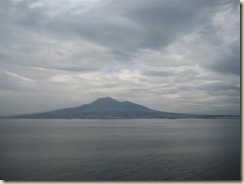 The tour of Pompeii proved to be problematic because several folks on the bus were unable to keep up with the group.  I stayed back with them to make sure they didn’t get lost.  Even though we were all carrying wireless receivers, it was still difficult to locate the tour guide at times. 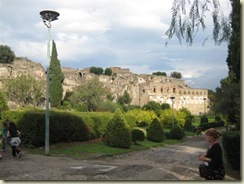 The Harbor of Pompeii 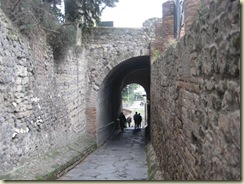 We entered the area through La Porta Marina and stopped at the Temple of Apollo.  Then it was on to the Forum, the Temple of Jupiter (at the end of the Forum), an ancient bar, an ancient bakery, and a drinking fountain (devoted to the god, Hermes).  We also went to the largest home in Pompeii, Terme del Foro, complete with Roman Bath rooms.  Very elegant, even today. 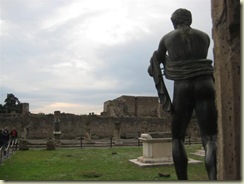 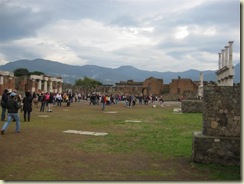 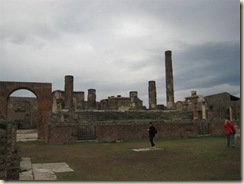 The Temple of Jupiter at the Forum 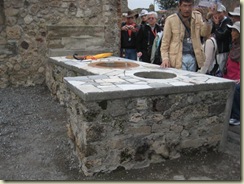 One of many pubs at Pompeii 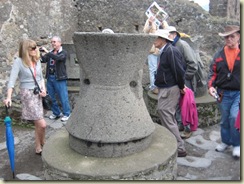 A bakery, complete with grain grinders 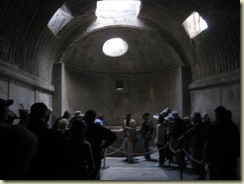 We also got a chance to look at the artifacts including casts of some of the victims of Pompeii.  The guide explained that the casts were made by injecting liquid plaster (or something similar) into a covered individual.  The plaster filled the spaces left by the incinerated victim leaving a perfect statue like cast.  He also said they had done DNA testing on some of the bones and were able to tell something about the diet of the people of Pompeii (need to check that out – have my doubts).

We got everyone back to the bus even though I had to wait for some of the passengers while the rest of the group essentially exited the site.  We did find them on the main street of new Pompeii waiting for the bus.

Prior to getting to the port, we saw the skyscrapers of the new financial district in the distance. 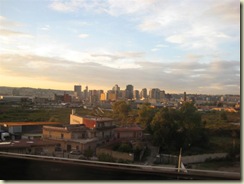 No hospitals, everyone home safe and sound.