Wake up call at 4:45 AM.  The buffet only has cold cereal and rolls – and most importantly, hot coffee - that early in the morning .  We are escorting today - “Classic Cairo” – which will take us through Cairo  and to the Pyramids and the Sphinx.  We were asked to be in the Equinox Theater at 6:15 AM to deal with the high number of passengers heading out day.  We are also taking along some snacks in case something doesn’t work out with lunch.

Ellen is on her bus and ready to go. 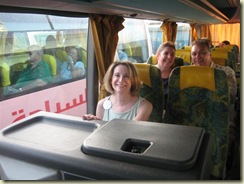 I snuck on to Ellen’s bus so we could get a photo of the two of us. 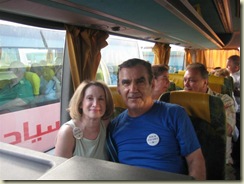 The trip from Alexandria to Cairo will take about 3.5 hours.  We didn’t get very far when Moshira, our guide, decided that her microphone wasn’t working well.  She said we would transfer to another bus (as it turned out, we moved to a bus that was already switched out).  The mic worked fine on this bus but the restroom was hazmat quality.  We were told that we would switch busses once again once we got to Giza.

The ride was desert almost all the way, with green areas only appearing as we neared the Nile River.  Many of the buildings looked they weren’t finished with upper stories having no roofs or windows and metal rods sticking out of the tops of the walls.  This is on purpose because there is a tax break on properties that are not totally finished.

The River Nile, whose flooding makes life in Egypt possible, is pretty well built up with new buildings.  The Nile also has islands on which are also built new structures.  The Nile was photographed from the bus so they are not the best quality. 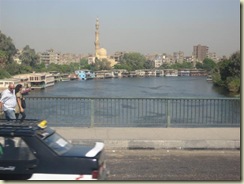 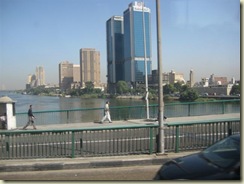 An island in the River Nile

Cairo, located at the entrance to the Nile Delta, is a massive city of 18 million people(our guide said 23 million people).  Our first stop in Cairo is the Egyptian Museum, home of the Royal Mummies and artifacts of King Tutankhamen.  No cameras are allowed in the museum.  We were told that the museum would be closing early today – the result of this was presence of many tour groups and many locals visiting.

While we did get into the museum (like sheep being herded), it was very difficult to see any of the artifacts due to the crowds.  The washrooms were, in a word, “indescribable'”.  Our group was not able to meet at a designated location because people could get there because of the number of folks already occupying that spot.  Eventually, we gave up on trying to do this is a guided fashion and most everyone went on their own.

I tried to get a look at the Tutankhamen Room but the crowds were just too large and pushy.

I was able to meet up with Ellen and we did get a chance to look at a few artifacts (especially the walking sticks of King Tutankhamen) before we had to meet our busses.  We found out later that the museum isn’t always this busy.

From the museum, the bus made its way through the crowded streets of Cairo.  Giza, the site of the pyramids, is actually located on one of the banks of the Nile.  There is a little town near the pyramids and the massive structures are visible behind the town.

The bus pulls into a large parking lot (all sand) already full of many busses.  Also present in the parking lot are a horde of local vendors selling all kinds of stuff (mini-pyramids).  There are camel rides available (caveat emptor) and many of the tourists are taking their chances by hopping on these spitting ships of the desert. 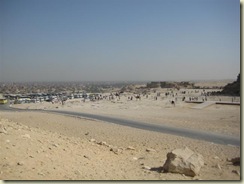 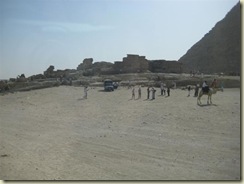 The Pyramids are amazing.  Khufu, The largest pyramid, the Great Pyramid of Giza, is the only Wonder of the Ancient World still standing.  it was built by the Pharaoh Khufu (Cheops in Greek) and stands about 480 ft high.  This pyramid is constructed of about 2 million limestone stones each weighing about five tons each.  Because of their size, you have to get a good distance away from the pyramids to get the whole structure in the picture. 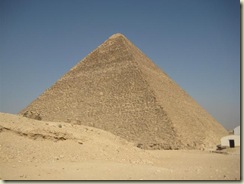 Adjacent to Khufu is the Khafre Pyramid built by the son of Khufu, Pharaoh Khafre (Chephren in Greek).  This pyramid, also about 480 ft in height, still has some of its plaster outer surface located at the apex of the structure.  It is smaller than Khufu but still impressive.  I was able to get close enough to Khafre to get a good look at the stones used to construct the pyramid. 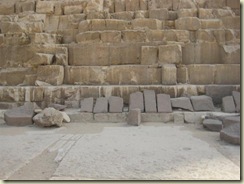 Stones – Base of Khafre Pyramid

Near both pyramids is a quarry, which was the source of some of the stones for the pyramids.  Others came from quarries several miles away. 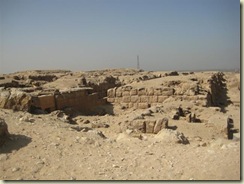 Quarry – Stones for the Pyramids

I met up with Ellen at the Bus Area (thanks to her bright pink Celebrity Cap). 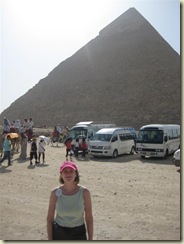 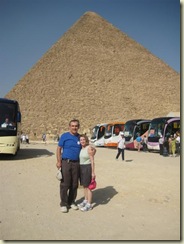 The Pyramids and Us

Our next stop was a viewing area which afforded a shot of all three Giza pyramids including the smaller, Menkaure Pyramid (built by the grandson of Khufu).  This pyramid, about 160 feet high, has an unusual slot in the front.  In addition to Menkaure, there are three small pyramids knows as the Pyramids of the Queen (Title 9 please). 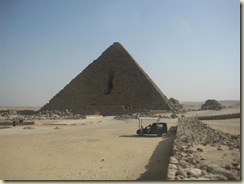 Menkaure (Mycerinus in Greek) Pyramid and Pyramids of the Queens 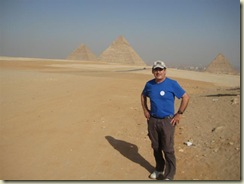 The Pyramids of Giza and Me

A short distance from the Pyramids stands the Sphinx, a statue with the head of a man (Khafre, most experts believe) and the body of a sitting lion.  The Sphinx’s face is damaged because Napoleon’s troops used the Sphinx as target practice.  While the head has lots of detail, the lion’s body looks like an elongated mound (maybe much of the detail has eroded over the centuries).  It is still an impressive work. 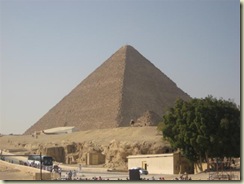 Khufu from the Sphinx 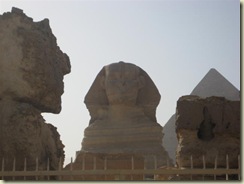 The Sphinx and Khafre Pyramid in background

From the Pyramids, we head for a late lunch at the Cairo Mena Hotel Oberoi, a luxury hotel some distance from the Giza Plateau.  We were greeted with Pomp and Circumstance by a musical group including an Egyptian bagpipe player. 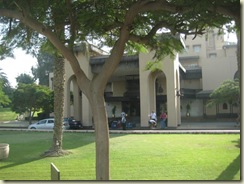 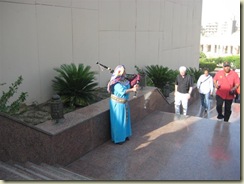 The Hotel was very elegant and the meal good (including an unidentifiable fish called the Egyptian Neela (guessing at the spelling).

Our final stop was at the Papyrus Institute (another campus).

The ride home took another three hours (arrived a little after 8 PM).  When we do this trip the next time, I will bring something to listen to.

We had the strength to catch the show, the Magical Mayhem of Neal Austin.

A long but educational day.

A sea day tomorrow…just what we need.