Corfu, founded in the 8th Century BC, is the second largest of the seven Ionian Islands with a total population of about 150,000.   The Island is 36 miles long and 18 miles wide and contains 4 million olive trees.  In fact, 60% of the land is covered by olive, cypress, citrus trees and vineyards.  The island may be the setting for the Tempest, and where Ulysses washed ashore in the Odyssey. The capital of the island is Corfu Town (Kerkira in Greek – named after Kira, the muse of mythology (and played by Olivia Newton-John in Xanadu). 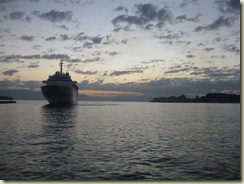 This morning – pretty early – we are on a tour:  “Paleokastritsa, Lakones, and Wine Tasting” (see Map below).

Our first stop is Paleokastritsa (Old Castle) – 16 mi West of Corfu.  The town is essentially deserted with just a few restaurants open for people to drink coffee.  The highlight of the stop in Paleokastritsa is the boat ride (7 Euros) around the harbor to view the many caves.  I was comped for the boat trip. 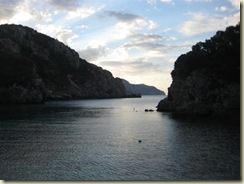 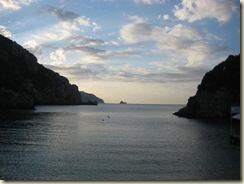 Ellen went on the boat ride first – my group is next. 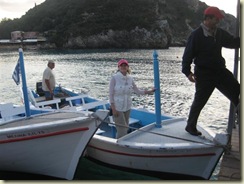 The boat ride is very scenic – a bit chilly this early in the morning – with rock formations and caves.  See below. 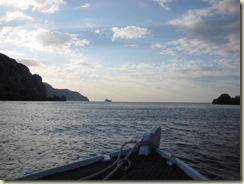 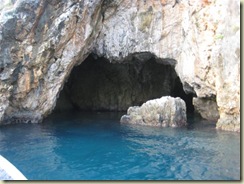 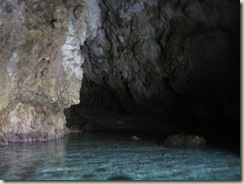 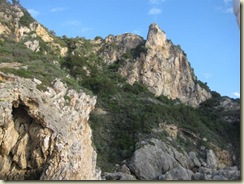 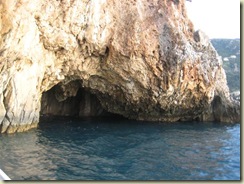 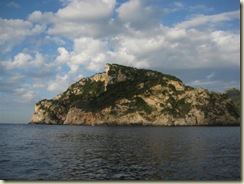 We entered the Cave of St Nicholas.  This cave have an interesting water feature called the “Blue Eye”.  The blue color must be a combination of sediment and sunlight and it is pretty dramatic. 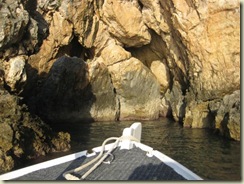 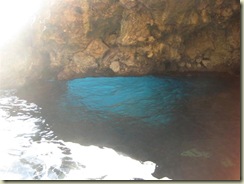 View from the beach at Paleokastritsa

The tour then proceeded up the narrow winding road to the town of Lakones, where we were supposed to get an authentic Greek snack, some wine, and some shopping.  On our way, the view was terrific. 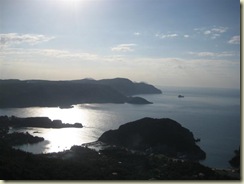 Paleokastritsa from the hills

We had our snack at the Kolombos Taverna in Lakones.  The snack, Feta, bread, olives, potato knish, and wine was similar to the one we had in Corinth last cruise.  The wine seemed pretty watered down – if not, Corfu is not a wine paradise. 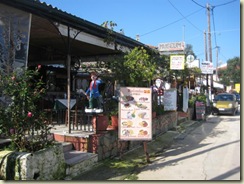 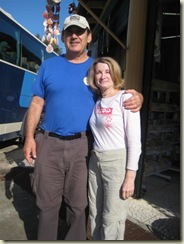 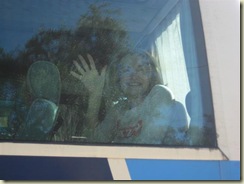 Ellen in her bus

Lakones was a pretty small place and we did spend a little too much time there.  Soon we were on on way back to the pier.  One particularly interesting site was the Theotokos Byzantine Monastery perched up on a hill overlooking the sea. 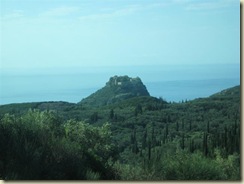 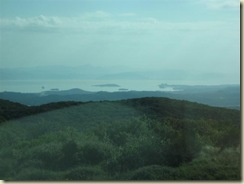 Back on the ship, we were able to get a nice view of Corfu Town. 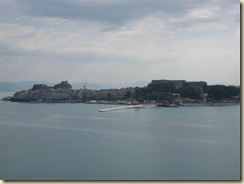 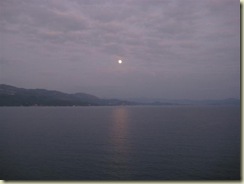 The Headliner tonight is Jason Chase – we saw part of his show since we had seen his full show last cruise.

We then took in “Celebrity Singing Star” – won by Joelle from Holland (Christina Aguilera song).  Maybe not the best singer but definitely the most difficult to sing.