Beautiful day in Messina.  The ship is again very close to the city so have a great view of Messina with its Cathedral.  Beyond Messina harbor, mainland Italy is clearly visible on the port side of the ship 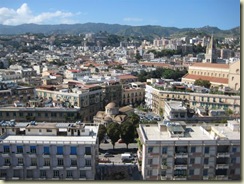 Messina, Italy from the ship 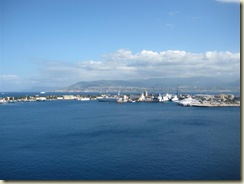 We have an afternoon tour today - “Lovely Taormina”, which will take us to a little town in the hills south of Messina.  The bus is new and comfortable and the ride of scenic (this is, after all, where “The Godfather II” was filmed).  Sicily’s highways are in good shape and there are many tunnels through the mountains on our way.  The 35 mile trip to Taormina is a short one.

Taormina is an old city – founded in 358 BC – and reachable only by elevator (or by stairs – 7 flights - for the hearty).  The groups took turns getting up the city level.  Once there, we were treated to scenic views of the countryside below as well as a peak of Mt. Etna (snow covered) through the clouds. 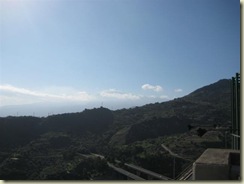 Mt Etna in the distance from Taormina

The plan was to do a walking tour of the town ending up at the Greco-Roman Amphitheater (everyone had wireless receivers so we could keep track of the guide).  From there, we were on our own for a little while to do shopping.  We were able to find an Internet Point to check in with home.  Most of the buildings in the town are from the Middle Ages – today, Taormina is a popular resort town. 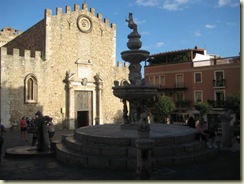 We entered the town through the Catana Gate, so named because the gate faces the nearby town of Catana, located south of Taormina. 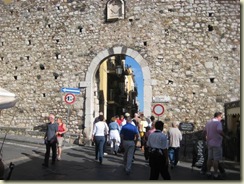 The Catana Gate to the city 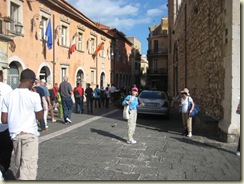 As we walk along, Ellen’s guide pointed out that there is a building, now a police station, that was once part of the town’s Jewish Quarter.  The only remaining signs that it was a Jewish building are several Mogen David emblems on the outer walls.

Taormina has several churches and also had an Acropolis located atop the peak behind the city. 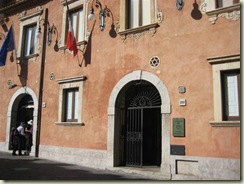 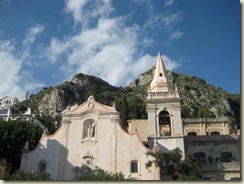 One interesting site on the walking tour is the “Narrow Street”.  This street, not for the claustrophobic, is barely shoulder width across.  The stairs on this street must lead to apartments higher up on the hill. 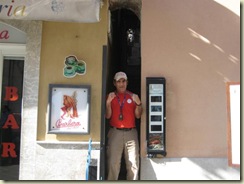 The highlight of the walking tour (and not because it has the only washrooms (words cannot describe the condition of these washrooms)) is the Greco-Roman Theater.  The amphitheater was built by the Greeks in the 3rd Century BC and upgraded by the Romans in the 2nd Century AD. 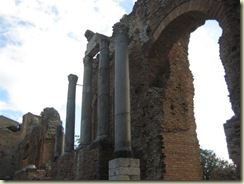 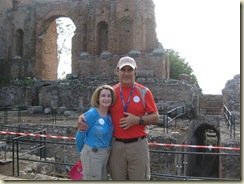 That’s us at the Amphitheater 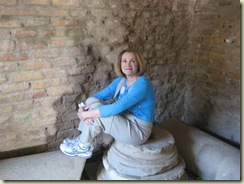 The Amphitheater sits on a hill about 700 feet about the sea below.  This locations affords great shows of the surrounding hills and the Bay of Naxos. 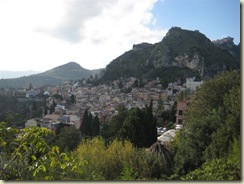 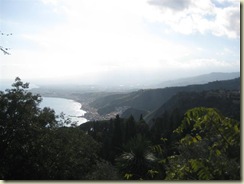 Views from the Amphitheater

To get back to the level of the busses, some passengers took the elevator but Ellen and I took the seven flights of stairs.  The ride back was in light traffic and soon we were back on the Equinox.