The flights arranged by Celebrity were very different on this cruise.  We are booked on Southwest Airlines 863/662.  Our first flight to Nashville departs O’Hare at 11:25 AM.  The taxi was scheduled for 9:30 AM, which, even though we are unfamiliar with how Southwest works, should give us enough time to get everything done.  We got to Terminal 5 before 10 AM; the Southwest kiosk area was packed but I did get an open station and printed our boarding passes and luggage tags.  We also got our boarding passes for the Nashville to FLL leg (Boarding Group B 14 and 16 – see below for an explanation on how this works).  Ellen’s fair included two checked bags, which would fly with us to Ft Lauderdale.  They didn’t have nearly enough bag drop agents, so we spent about 10 minutes in line before dropping our two suitcases.

We are at Gate M37 – the gates are numbered consecutively so this gate is 37 gates away from the TSA Pre-Check Security area.  The walk seemed interminable and clocked at near 4000 steps.  I was so glad we had checked those bags because they would have seemed pretty heavy by the time we arrived at the gate.  M37 was in a cluster at the end of the M Concourse.  That part of the terminal seemed new as confirmed by the construction still going on.  The agent desks looked new as well and the waiting area was quite crowded with Southwest passengers.  We were supposed to board at 10:55 AM but the agent told us that although our plane - SW863 - was here, the crew was one short, the pilot. 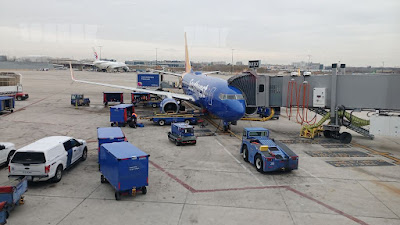 Another pilot was due to land his plane is about 30 minutes and he would hustle over and fly our plane.

Since this was our first time on Southwest this was also our first experience with the “unique” boarding process.  There are no assigned seats – only boarding groups and within those groups there are numbers which indicate where in that group you are.  Group A are either elite or are paying a premium to be in that group.  Most people are in Group B (like us) and then there is the dreaded Group C, where you probably won’t be able to sit with your group and be left with a middle seat in the rear of the plane.

Just 24 hours earlier. Check-in and group assignment is done online exactly 24 hours before departure.  I was on both of our phones on the Southwest App at exactly 11:25AM – Ellen got checked in and when I hit the key, something happened and I had to start over.  So Ellen was assigned B4, and I was in B6.  So that was about the best we could expect.  It costs $30 pp for early check-in, but you will still get in the B group.

The pilot was still not there but the boarding process started.  There are poles and signs set up with number starting with one and going to the 30s.  Group A was called, and passengers gathered next to the sign with their boarding number.  Military, families, and mobility challenged persons got on first.  Then Group A got on in order.  By got on I mean they stayed in that order in the jetway.  Group B, including us, were next.  By the time, we got on the aircraft there were very few seats left – we snared a middle and window near the back.  It was only an hour flight so it would be OK.  The plane was full, and the aisle seats went fast.

The pilot showed up and got a round of applause.  Two of our flight attendants were apparently seconded from a Comedy Club because they had a routine going the whole flight.  I actually like my flight attendants to be serious members of the crew, so I was not that thrilled.

Our B-737-700 (no chargers) departed about 35 miles late.  Because our flight was over 170 miles (that's the rule), we were able to get a soft drink.  Southwest did have nice snacks – party mix – that were nicer than just pretzels.  The flight was smooth and the flight to Nashville short.

Our gate at Nashville was very close to our arrival gate.  When we got there, there was no plane at that gate and we were told that that flight was delayed as well.  There is a bomb cyclone and winter storm watch for a lot of the country, so flight delays are all over the place.  The flight (SW662) did come in about a half hour late.  We can’t miss our connection if it isn’t there. 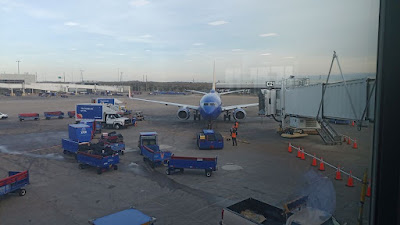 The boarding process was the same and this time we got aisle across seats for the 2 hr 15 minute flight to BNE.  That flight did not have comedian flight attendants.  The flight was smooth.  To our dismay, we realized that Ellen’s phone was not in her bag and must have been left in Nashville.  The flight attendant contacted the agent at our gate, and no one turned one in.  We will have to contact both Southwest and T-Mobile when we get to our hotel. 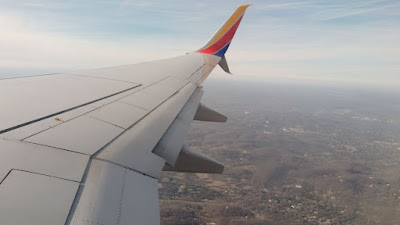 Here's the graphic of our flights on SW. 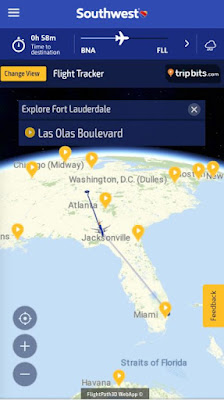 Our bags were among the first to make the carousel (probably put on the plane last from the first plane).  I called the hotel for a pickup and then we walked to the “E” Section on the lower level where Hotel Shuttles operate.  We ran into Bill Fall, who was waiting for his shuttle to arrive – two calls to the hotel and about 45 minutes later, our shuttle “Cambria Hotels” showed up.

The Comfort Inn and Suites Ft Lauderdale Airport was just a few minutes away once you cleared the almost clogged airport traffic.  We checked in pretty quickly and went to our room, 521.  The room was very nice – looked new – with a large bed and a separate seating area.  The bathroom was spacious.  Best of all, we had no adjacent room on one side and perhaps no neighbor on the other side, so it was quiet.

By this time, it was about 7:30 PM so dinner was out.  We ate what was left over from the food we brought on the plane.

The shuttle to the cruise port was $15 pp so tomorrow I will check out an Uber ride.