It seems the temperature has been 85 degrees the entire cruise.

We are in Group 11 and are expected to be in the theater for disembarkation at 8:15 AM – to make that time, I was up the Oceanview Café when it opened at 6 AM or so.  To my surprise, it wasn’t crowded or chaotic and I even got my seat in the corner.  I had a nice breakfast of yes, pancakes with cottage cheese and jam and some scrambled eggs.  I then brought Ellen her hot off the griddle fried eggs and a waffle.

At 8 AM, we made our way to the Theater but never got there when we heard our number being called.  We also said our goodbyes to Crystal at the gangway and headed to the baggage area – we found our bags right away and we were in the queue for passport control.  No agents today just facial recognition scanners – we were out of there in minutes.  Once outside, we walked the length of the terminal to the busses.  Ellen found our bus and we got seats and waited for about a half hour before the bus left for the airport.  All in all, a very smooth disembarkation.

The airport is less than 10 minutes away and we got off at Terminal 1 – home of both United and Silver Airways.  In fact, Silver has a couple of agents tucked away at the end of United bank of airport agents.  The line did not move for several minutes, and I thought that we shouldn’t be in this line because I have boarding passes.  So, we went to TSA pre-check and security. I was a little concerned at this point since we were carrying our two bags on board and each contained a lot of liquids, many of which had more than 3 ounces of stuff.  I tucked my cell phone and wallet into my backpack and just before I went through the magnetometer, a TSA agent yelled “Whose phone is this?”.  It was mine and I was positive I had zipped up the backpack. In any event, the cases all went through without incident.

Even though it’s a small plane – Silver Airways Flight 0095 was a twin prop ATR-700-200 – there were boarding groups.  We were in one of the first groups.  There was no jetway – we took an escalator down to tarmac level and then walked to the back of the plane where there was a very narrow stairway into the plane.  Ellen was in front of me trying to haul one third of her body weight up the stairway and I was struggling to find a place for my big feet on the small rungs of the ladder.  Eventually, we both got in (no help from the ground personnel or flight attendants at Silver Airways) – then I had to hoist both 30-pound bags into the overhead bins, which while a pain, I did.

We were in 4D and 4F in a 2X2 configuration.  I was in the window seat not more than 10 feet from the starboard prop. 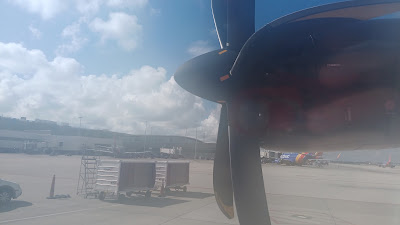 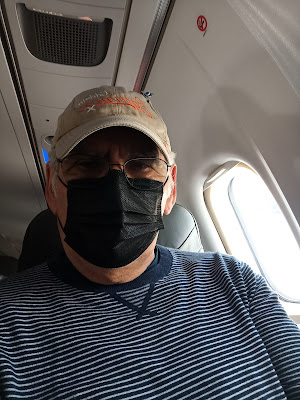 The seats were more comfortable and the leg room better than some jets.  We started our taxiing and almost got to the active runway – the plane ahead of us took off – then the pilot came on and said that ATC had issued a ground stop.  The issue was a computer malfunction at Miami Center so no planes in the Florida area were moving at this point.  What was supposed to be 10 min delay became a 40 minute delay.  I could see the line of planes backed up trying to get to the active runways. 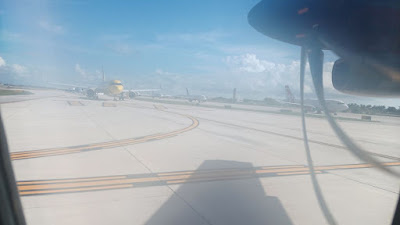 We eventually did get clearance and I have to tell you that the db level of that prop (right outside of my window) was earsplitting.  It stayed that way until the pilot changed the pitch of the prop – it quieted down and was not an issue for the rest of the one hour 20 minute flight to JAX.  Our climb out took us over Port Everglades, and I could see Celebrity Edge docked. 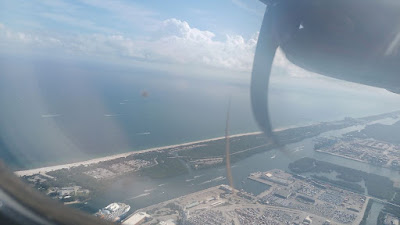 The only thing served was a small bottle of water.

When you take a picture of the prop it looks like it is not spinning.  A scary optical illusion. 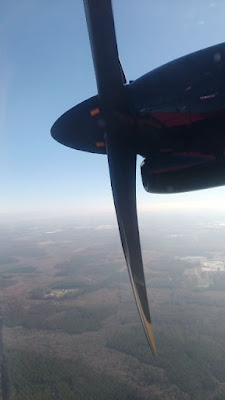 We were trying to figure out what we would do in the event we did miss our flight – we did indeed land after the connecting flight was supposed to leave.  We did get come help this time getting our bags down the stairway.  We then hightailed it to the C Concourse which was several minutes away – Ellen who is quicker ran ahead and I guess she was going to hold the flight until I got there.  Not out of breath but definitely tired, I did haul myself, backpack, and roller bag to the gate.  It turned out that the plane – UAL1494 – did not depart at 3:25 PM as scheduled; it had not even started boarding since the previous flight had come in late due to the Florida hold.  We boarded in priority and I, not knowing the proper technique of putting up an overhead bag, struggled mightily getting our bags into the bins.  We were middle and aisle on this flight and despite being ordinary coach seats, they were not uncomfortable.  The guy on the aisle was wearing a mask as we were.

The climb out was smooth. 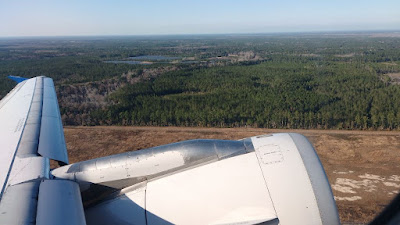 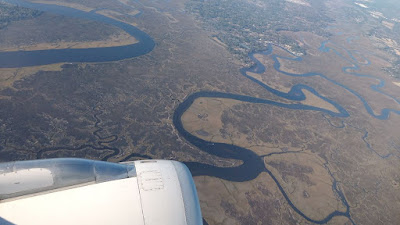 The flight was smooth and uneventful into the Chicago.  I got some great pictures on final approach of the low ceiling and city lights. 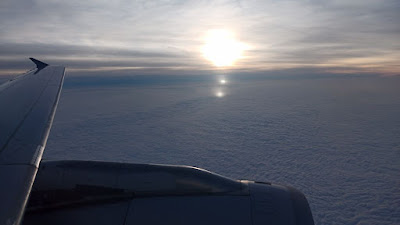 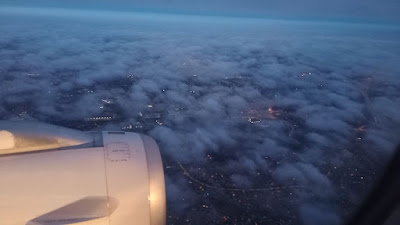 We weren’t going to mess with any cabs tonight; one of the kids picked us up.

We also had dinner with everyone which was a nice way to come home.