Our first sea day; it’s a beautiful day as the ship steams toward the north coast of Cuba.  I slept pretty well last night and I’m ready for my favorite meal of the day – Breakfast in the Ocean View Café.  Even though I got up there at just a bit after opening, the place was crawling with some of the 3000 passengers including a lot of kids.  I got my favorite seat in the far corner of the room where ice cream is served – there was no one in there with me so I could take off my mask, which I wore in the elevator on the way here.  No one else in my immediate vicinity is wearing a mask.  Maybe, Celebrity Edge is a floating herd-immune vessel – I doubt that since most of the passengers got on in the Republic of Florida, a land of anti-vaxxers.

I got a beautiful picture of the sun coming up in the Atlantic Ocean.  As you can see, the sea is like a lake. 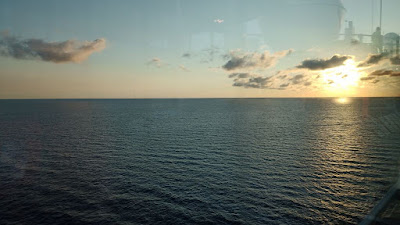 I had a waffle with cottage cheese and jams plus some very good, scrambled eggs.  I tried to get sour cream, which Edge used to have as a standard item, but that didn’t work out.  The waffle was also kind of wonky, soggy and dark.  I might have gotten one of their “special” waffles (blueberry?) by mistake.

I brought Ellen her breakfast – lox, cream cheese, bread, fruit, and cucumbers. Our routine has been initiated.

The trick on Edge - we found out two years ago - is to find a quiet place – it’s nearly impossible but we started off on the pool deck (we are going to focus on outdoor spaces in case the ship is a COVID super-spreader) – that was OK but too many people talking around us.  So we headed out for lunch.

We decided to try the Cosmopolitan Dining Room for lunch – it is the only dining room serving lunch (only on sea days, I think). While waiting to be seated, I am still sporting my trademark 4-layer black mask. And yes, they made me lose the cap once I walked in the room.  While, that is a good thing, the dress code was enforced sparingly and inconsistently. 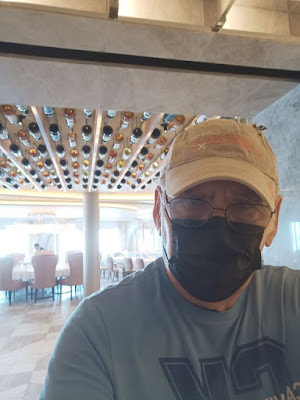 Ellen had the egg and fines herbs panini, and I had the veggie burger. We both had the crispy mushroom in artichoke sauce (one of the best dishes on the ship).  We both had the Key Lime Salad which was OK.  The cold potato soup was thin and tasteless, and the veggie burger was thin and a little overdone.  It didn’t taste like either an “Impossible Burger” or a “Beyond Burger”.

It is very difficult to find a seat on Deck 14's breezeway - the inner, larger, seats require a fee and a reservation, and the smaller outer ones are always taken. We got lucky today and I documented that with this picture. 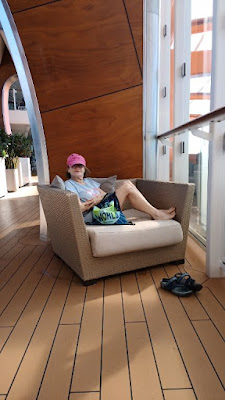 From there we went to the Solarium, which was pretty quiet and today had little if any chlorine smell.  I am reading “Colorblind”, probably the only Jesse Stone novel I’ve not read.

We had dinner in the Normandie Dining Room.  Cesar Salad, broiled salmon, baked potato, and creamed spinach for me.  Ellen had the baked brie and broiled salmon.  The Cesar Salad was OK, but the salmon was undercooked, and the baked potato was OK.  I also ordered some sautéed spinach which did not come out as I expected. I'll have to fine tune the cooking instructions next time.

The Central Plaza was hopping as we walked to the Theater. 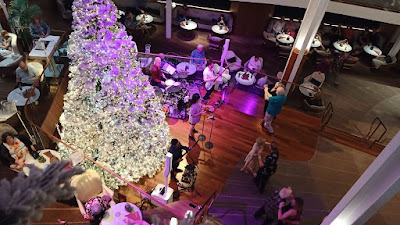 Showtime tonight featured Alicia Hill, a vocalist who, according to her online background was a Cruise Director on Azamara. 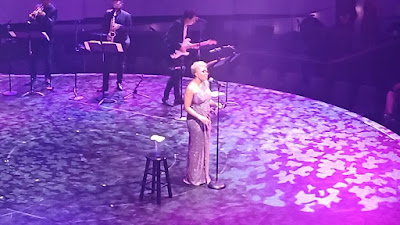 We never saw her on an Azamara Ship.  She is an Aretha Franklin type of singer, so we lasted about a song and half, and we were saturated with decibels.  I should mention that Alicia Hill is our neighbor, and we can hear her practicing every so often.

We took refuge again in Eden where the singers are acoustic only.  I like the lead singers (Lucy and Dalton) and the guitarist while the viola played by the fourth member of the troupe is a little grating after a while. 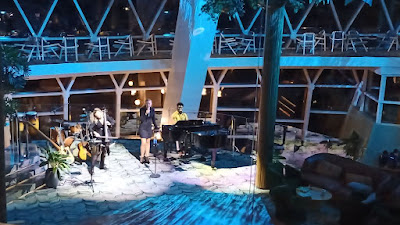 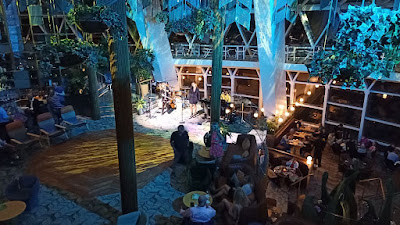 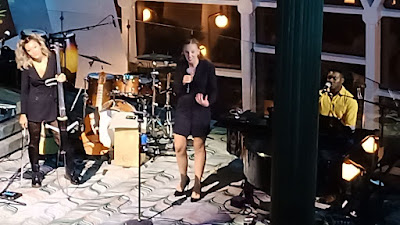 Headed to the room - another non-working sea day tomorrow.  Could get used to that.
Posted by Hal T at 2:24 PM