Up early as usual.  From our room, I took this picture of a lone Divi-divi tree on a sandbar.  When we got back later the tree was submerged by the tide. 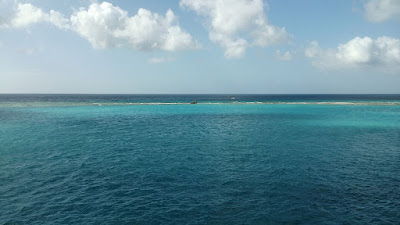 There were a lot of people in the Oceanview Cafe when I got there for breakfast.  I did get my seat and had a great breakfast once again.

We were here just after we restarted cruising in April 2022 – on Constellation – on that cruise, we did not get off at any port. We came back in May 2022 on Queen Elizabeth - all we did then was get some water to bring back to the ship. The city looked in bad shape with little activity on the main street and nothing but shuttered stores on the second street. The iconic trolley wasn’t running.

I guess third time’s the charm.  Celebrity Edge got a better berth and the walk to the terminal entrance was quite a bit shorter than last time.  There had been some changes in the cruise terminal.  The facility had added some fast-food restaurants – a Quiznos, a Sbarros Pizza, and a Juan Valdez Coffee shop. That's Ellen in the picture below checking out the menu. 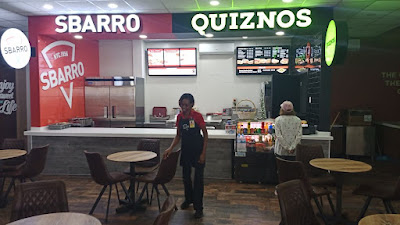 The Quiznos was open, but the others were still being finished out. The young woman who was tending the Quiznos told us that she had been open for just four days.  I like Quiznos – we don’t have many stores in the Chicagoland area.

This time out, there were lots of people on LG Smith Boulevard, the main street 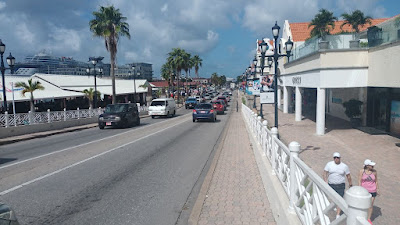 – there was a least one more cruise ship here today – an Aida ship.  Also, “Freewinds” the vintage Scientology ship is also here today. 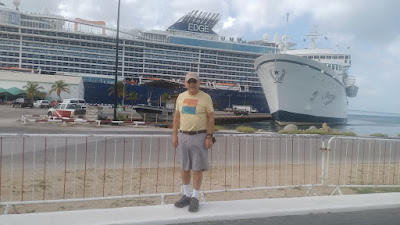 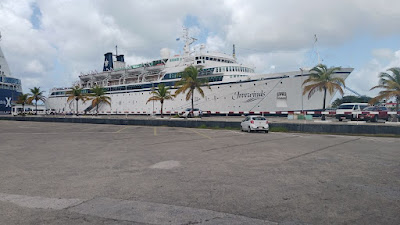 The restaurants, bars, and shops were open, and people were buying stuff.  We walked down the main street and then over to Caya Ernesto Harms, which was mostly deserted this time.  There were two spas on this street in the past and they were both gone – there were, however, some restaurants open with patrons.  So that was a god sign.  Scattered throughout the downtown area were ceramic horses (mostly blue) 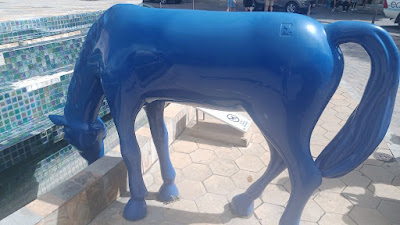 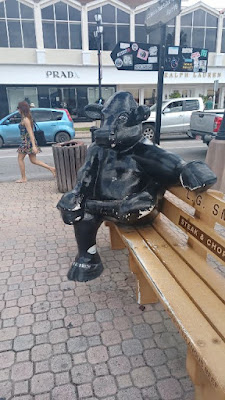 – I didn’t get a chance to see which artists did these but they do add some color to the town.

We headed toward the beach and the pier walking by the Aruba Renaissance Hotel and the Royal Plaza – there were some people in the building of the Plaza. 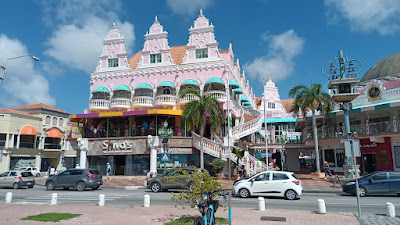 It was hot so I thought it would be nice to get a local beer and a coke and enjoy the view of the pier. We found a couple of seats in the shade – not an easy feat – at Lucy’s Retired Surfers Bar and Restaurant.  I had the local “Magic Mango Ale” ($6) and Ellen had the Diet Coke ($4). Ellen took a nice, sweaty picture of me, 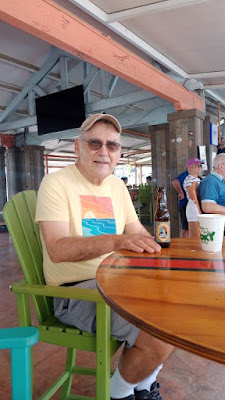 The coke was normal size but the beer was Lilliputian – maybe 8.5 ounces – maybe a single swig on a hot day. No more longnecks, I guess. From our seats, I was able to get a nice shot of Edge docked. 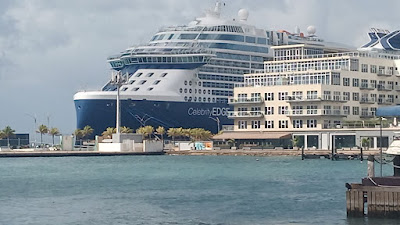 We sat there a while – the wait staff is in no hurry – and then back to the ship.  We’re at port so the Eden’s Café is closed – lunch was in the Oceanview Café. Pizza seemed the best option for today.

We spent most of the afternoon in the Solarium, where I got this nice shot of Aruba. 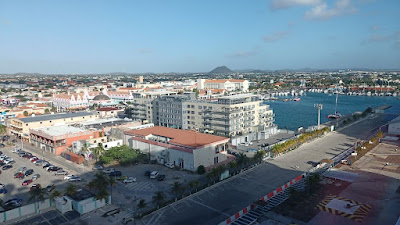 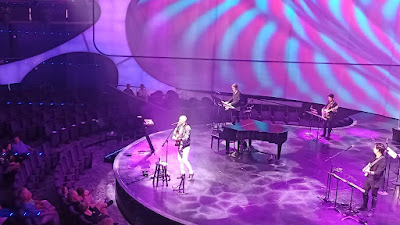 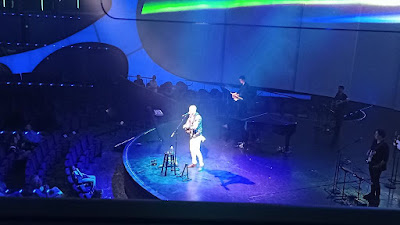 He’s been hired as an entertainer in residence until February 2023, so they will keep him busy.  He’s a rock-a-country singer with an emphasis on his guitar.  He did “Wonderful World” in his style, and I didn’t care for it.  He did a tribute to Glen Campbell which was visual heavy.  I think that too many visuals distract from the music but that’s me.

We next went to Eden to hear the Acoustic Music now featured in that venue.  Before we got there, I had Ellen take a picture of me with the "wooden people" that live outside Eden. 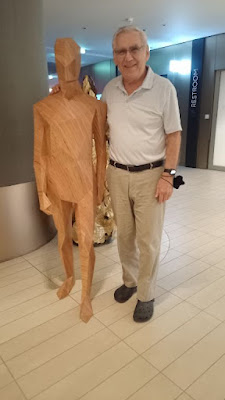 There are five performers, Lucy, Dalton, Kriss, Ilena, and one more whose name escapes me.  They team up different each evening to provide variety.  I personally like the Lucy and Dalton Duo.  They are not loud and very pleasant to listen to.  I don’t recognize that many of their songs but they are all pleasant. 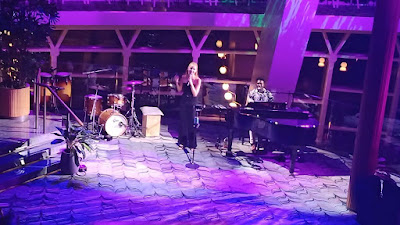 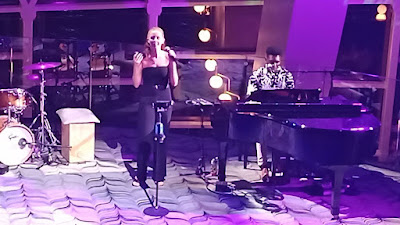 The viola, played by Ilena, just becomes too much after a while.  We’ll have to be selective by checking out the program (not the app), which does say who is in Eden.

A long day in Aruba.

Note on Dining for the remainder of the cruise.

Breakfast – I did switch off to pancakes covered with cottage cheese and jellies – did like that option better than the waffles.  I was able to bring Ellen fried eggs and omelets from Oceanview Café if I get her plate totally ready and then took the fresh eggs right down to the room – faster than room service.

Lunch – Eden’s Café when it’s open and Oceanview when it’s not.  Really like Gorgonzola cheese.

I gave the Veggie Burger another try by getting one from the Mast Grill.  Usually, there are made fresh which takes 15 minutes but this burger came out of warming drawer and tasted worse than the one I had in the Cosmopolitan Restaurant.

Dinner – we did go back to the Cyprus Restaurant – mainly for the Taverna Salad but when it came it literally was 10 percent of what it had been before – literally three cubes of tomato, one olive, and one cube of cucumber, and a sliver of red onion.  I should have said something but I didn’t.  I did have the seared Salmon (different and much better than the Broiled Salmon).  I kept looking for it on each subsequent day but it was there or in any of the other restaurants.  Because of the min-Taverna, I decided not to go back there.

We ate a few times at the Normandie Restaurant mainly because Ellen likes the baked brie starter.  Mushroom soup was on the menu one evening but it was not as good as I remembered it – kind of thin and without texture.

Two dishes that I did not like at all – the Herb Crusted Haddock (had such high hopes) – Haddock is a very good fish – I should have asked them to broil it.  The other dish was the Tuna Putanesca – all I could taste was olives.

At the dinner where we had the Haddock, we asked to be seated away from people. But the hostess put another couple (in an otherwise empty restaurant) about three feet away from.  As it turned out, most everything on the menu that night didn’t make grade so we left early and went upstairs for pizza.  The couple was very nice but if the food isn’t OK, there’s no need to chat especially in these times.

So, back to the itinerary…