It’s a relatively short stop in Cartagena so we opted to stay on the ship – and since it is Christmas Day, it made no sense to even go visit the little shopping mall at the end of the pier.  Other people were getting off the ship because the buffet was packed when I got up there.  I had to sit at a skinny table next to the ice cream parlor to eat my breakfast.  I had the usual combo of waffles, cottage cheese, jams, and scrambled eggs.  There are pancakes but the specialty package seems to be craisin (dried cranberry) pancakes – not my first choice.  The food was good but it was too crowded to stay up there.

I documented our stop in Cartagena. 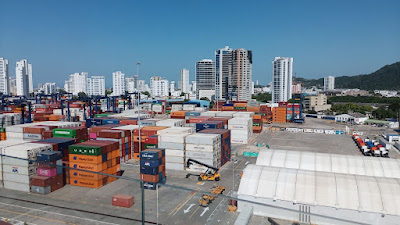 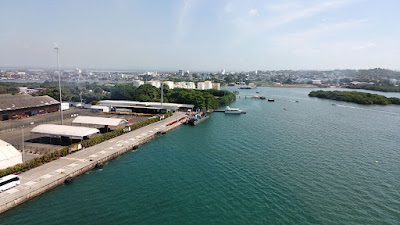 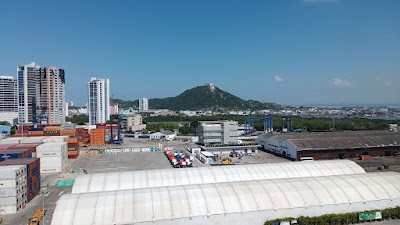 We had a late breakfast out on the deck in the Oceanview Café in lieu of lunch. I had a bagel with lox and cream cheese and some herring. They have very good lox and herring on this ship and while they can't find the sour cream, the herring was available the entire cruise (other ships run out in the first couple of days).  Bill Fall came over and joined us so that was a pleasant way to spend a morning.

The real lunch was fish and chips in the Oceanview Café – the fish was a little greasy but a nice change.  The chips were good as well.

Bill had a post departure talk in the theater that I went to see. It was about the new locks - I didn't know that much about the new canal so it all was all new to me. 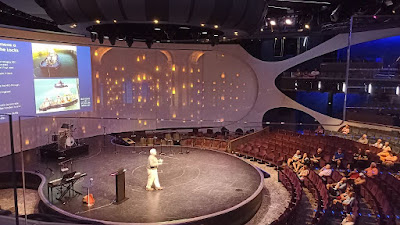 Tonight, we had dinner in the Greek themed Cyprus Restaurant.  I had the Taverna Salad (a Greek Salad sort of), Saganaki (different from the last time we had it), a Boston Lettuce and Feta Cheese Salad (that was good), and broiled Salmon (underdone). Service was quick and efficient today.  The orders came right out despite the fact that the place was full.

The show tonight was “The Uptown Boys” - four guys who pay tribute to the music of Billy Joel and his musical, "Moving Out".  Although a musical cousin to "Jersey Boys", it has different choreography, and the songs are some of my favorites.  The four vocalists had great voices and the show was highly entertaining.  Best of all, the dB levels were tolerable, and we could enjoy the show.  Why can't they all be like this? 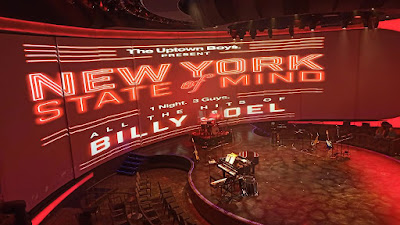 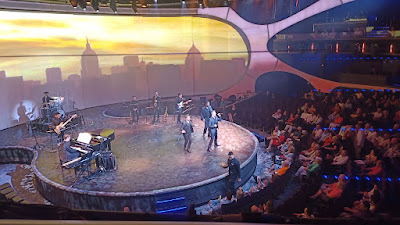 After the show, we tried the acoustic music in Eden but there was too much Cello tonight and not enough vocals.

We went to the room for the night.