We have a rare afternoon flight today to Tampa, FL where we will join Celebrity Constellation tomorrow.

Before our travel day even started, we had unscheduled things to do. As I was having breakfast, I heard our hall smoke alarm chirp.  This meant changing the backup battery.  I got the ladder from our storage room and changed it – if it had happened tomorrow, it would have driven our neighbors crazy.

United Airlines 2158 departs at 2:20 PM so we called for a taxi at 12:20 PM.  The cab arrived 15 minutes early (as they tend to do) and we got underway at 12:30 PM.  It took less than 15 minutes to get to ORD. We checked our bags with an outside agent and headed to the TSA PreChek security gate.  That took very little time and we went to our gate – B10, which was on our side of the terminal (no walking under the tarmac).  Our plane, a B737-900, was already at the gate along with what will be a fully loaded aircraft. 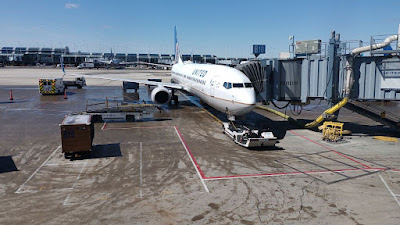 Seats were hard to find and the seats at this gate were different than those on Concourse C – they were individual bucket seats and padded sofa like seats.  There were plugs everywhere.  A very interesting lounge.

The boarding process went smoothly – United has info screens that tell you which group is boarding (they use animations, as well for the non readers).  As it turns out, the overheads could not take any more roller boards so they were gate checked for free (we had already paid $35 per bag to check them) – that always seems unfair to me.  They also made an announcement that even small personal bags might not have room in the overheads and I was ready to argue that I needed my bag with me.  No one said anything as we boarded and we found plenty of small overhead slots.  We were in 20C/20D in the first exit row.  The seats were comfortable and roomy enough.

Everybody boarded about 10 minutes before takeoff and the plane pushed a few minutes early and taxied quite a ways to the active runway.  We took off right on time and we reached 15,000 feet at 2:36 PM.  The climb out was smooth as was the entire flight.  All I could see from my aisle seat was a hazy sky for almost the entire flight.

Although we landed a few minutes early, our gate was free.  This was our first time flying into Tampa so everything was new to us. We took a train from the gate area to the main terminal and then downstairs to baggage claim.  Our bags were out on the first pass.  I called the hotel and requested a shuttle pickup.  We went to the pickup location – Blue 2 – just outside the baggage claim area but the shuttle did not show.  After some back and forth calls, we finally figured out that there were two “Blue 2” locations.  We found the one where the taxis pick up and the shuttle showed up a few minutes later (he said he had been here twice earlier).  The front desk needs to be more specific on pickup location instructions.

We are staying at the Hampton Inn Tampa International Airport/Westshore (on Laurel Street), which is a couple of miles from TPA.  The hotel got decent ratings from Hotels.com and offers a hot breakfast.  It took a long time to get checked in – there was only one person manning the desk and the phones.  We are in Room 301 the very last room in that wing of the hotel – there is no room to the right of ours.

The room is not new but looks clean – it is big enough with a full King Size bed.  If it’s quiet, that’s a bonus.  We had bagels and salmon spread for dinner (the hotel supplied bottle water and coffee was available near the front desk).  By the time, we were settled in, it was about 7:30 PM so we simply stayed in the room.

I should mention that the only people wearing masks were the desk agent and us.  One guest showed up later with a mask.  No pandemic in DeSantis Land.