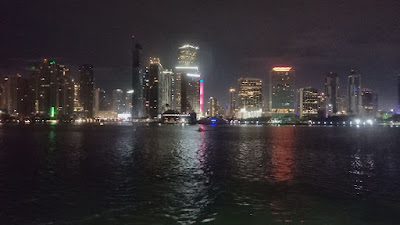 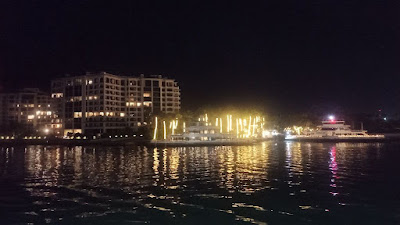 I went up first to get a table – fortunately at 6:30 PM, the masses had not yet arrived.  I had oatmeal and pancakes and eggs.  It was a little hectic but the food came and we were able to eat a civilized breakfast.

By that time, the sun was up and turning the skyline gold.  I also got a shot of Ellen and the Miami skyline. 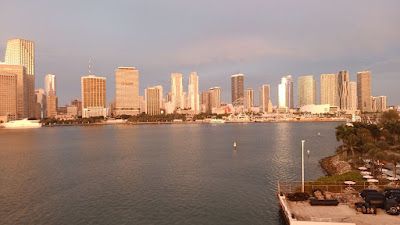 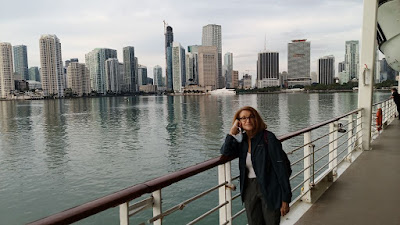 We vacated our room at 7:45 AM so we could walk off and get on our Azamara Transfer to MIA.  It would be almost an hour until we were given the go ahead to leave the ship – there was a delay in getting all of the bags off the ship.  We found our bags right away (small ship) and got into the line for immigration; we were only asked where we were going so our pass through that was pretty fast.  We found our bus, had our bags loaded and after about a half hour, we were off to MIA.  The ride took about 25 minutes – our stop for United was at “Section 2”.

We were dropped off at the lower level so we went to the top level and started our search for the United counter.  There are a lot of airlines operating out of Section 2 and United was near the end of the long stretch of counters.  Also, there were no washrooms along the way – we found United about 1000 steps later (literally).  The day before, I had purchased two checked bags ($30 with a $5 discount for early purchase).  We got our tags from the kiosk and waited in the wrong line because the tagged bag guy was not at his post.  He finally came and pulled the tagged bag folks out of the check in line and our bags were on their way to Chicago.

Another walk to the TSA line – not very crowded but one agent decided there was something in my bag that required a full look.  She took it all apart and gave it back to me.  I think the multiport USB charger and cords looked suspicious.  We walked another thousand steps to our gate, H17.

Boarding was at 11:45 AM for UA2465 with a departure time of 12:25 PM.  We had about an hour or so until boarding.  As it got closer, it was clear that we would be delayed – there was no plane at the gate and UA App said that the flight took off late from Chicago and the delay would be about 30 minutes.  Weather was good at both ends so that was a plus for us.

I bought a Coke Zero for us to share ($3.41 – highway robbery) while eating lunch (lox, cream cheese, and brioches from the ship).  We stayed a distance away from H17 since it was getting crowded and I was charging my phone at one of the charging hubs.

The plane came in and we did board about a half an hour late. 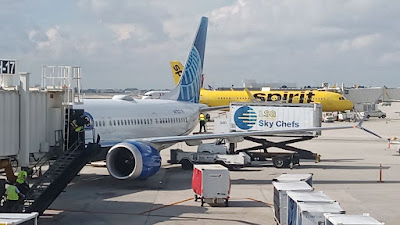 Boarding was pretty orderly – United has a blue lane for Groups 1 and 2 and a Green Lane for everyone else.  The plane is a 737-MAX-900, one of the planes grounded for almost two years for software and control surface issues.  Inside, the plane looked almost brand new.  We are in exit row seats, 20C and 20D (aisle across).  Plenty of leg room in these seats and the seats themselves are comfortable.

The flight took off close to 1 PM local time.  The engine noise is different in this plane because the engines are different – they have “chevrons” at the exit ports, which reduces the noise and changes the sound from a roar to a whine of sorts.  I could tell right away because I have flown enough that all the plane’s sounds are familiar to me.  The takeoff was smooth but the flight itself was choppy most of the way.  I also liked that the 900 MAX had a restroom just before first class – it’s a long plane and a long walk to the back.

The flight attendants were very good and one of them seemed to be in charge of mask compliance, reminding people several times to wear their mask over their nose.  What is wrong with people anyway?  Except for the reminder folks, guests were mask compliant and well behaved.  We landed just a few minutes late despite the delay.

Our bags got there before we did (we have to cross under the tarmac to the other concourses).  I called the cab and we scored a small American Taxi Blue car.  Ellen told the driver that he would need to wear a mask – he said he had one in the car and he did wear it correctly all the way home.

In a few minutes, we were dragging our suitcases up the icy ramp to the condo.  I had put a hold on the mail but something went wrong and the mailbox was stuffed with a month’s worth of mail (usually it gets delivered in a basket to our door).  Hope that is a one-off thing and not a new system ordered by Louis DeJoy.  The condo was cold, and it took hours to warm up.

We are planning to stay in for the next few days and then take an antigen test and PCR test before seeing family.

Still, after our COVID adventure, it was good to be home.