Slept so so – got up at 6:30 AM and went to the Oceanview Café for breakfast.  Cottage cheese is now available – maybe the ship did pick some up in Nassau.  Even though sour cream is available for baked potatoes, it is an unknown in the Cafe at breakfast.  I had my waffle plus Cottage Cheese and strawberry compote, scrambled eggs, and parts of some biscuits.  The coffee was hotter today but not hot enough.  Overall, the breakfast was good and it was quieter than usual.  I also actually finished an article in the Smithsonian magazine (about the whooping cough vaccine).

At 11:00AM, we went to hear Gary Koverman lecture about blood spatter.  His lectures are video heavy.  I learned a couple of new things about blood spatter identification but a lot of the material was familiar due to reading and watching the CSI shows on TV.  He did pull a large crowd and he used my computer for this presentation as his laptop and the laptops on the ship don’t work with his presentation (don’t know why).

Had lunch in the San Marco Dining Room – Ellen had an egg panini and I had the Niçoise Salad (didn't like it so much).

The open decks were closed due to high winds – we heard they were at 40 kts.  We found seats in the lounges near windows.  I am reading a new book by Nick Petrie called “The Drifter”.  It’s about Peter Ash, ex-Marine, who has a Reacher like existence – no real home and no real job.  He’s all about helping people, in this case the widow of one of Peter’s squad members.  Was his friend’s death a suicide – Peter is not so sure.  Peter may not be 6’5 and 250 pounds but he does have skills.  The book is written well.

Dinner was in the San Marco Dining Room – I had the Greek Salad (put oil and vinegar on it as it came with Ranch Dressing.  Also had the Meyer Lemon (yes) Tabouleh, which was very good.  I ordered the Basil Risotto off the vegetarian menu and I did not care for it because it was heavily seasoned with mint.

We went to the Cafe for some dessert and coffee and tea.  We also watch a very scenic sunset. 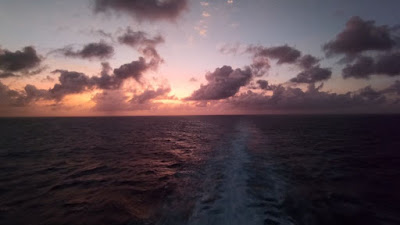 Showtime tonight was the production show, “Rock City”.  We did not attend because it was pretty loud and we've seen parts of it before.  We did stop by the Rendezvous Lounge and caught a few minutes of another band, "Long Play".  They are more of a rock band and not as easy listening as the other band, "Dancing Town". 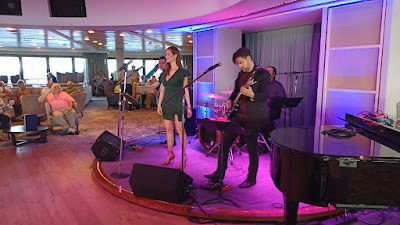 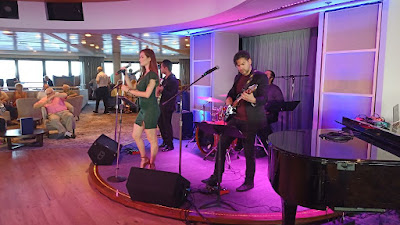 After that, it was back to our room to settle down.  The ship is moving a bit but the room in quiet.