My back is a little stiff this morning but manageable.

I was up early enough to catch the sunrise from the cabin as we approached Aruba. 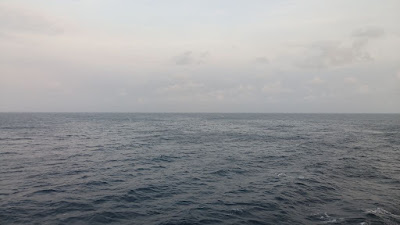 Last night, we received a letter in our room that we were scheduled for COVID antigen testing at 9:30 AM.  This would conflict with our planned excursion, so we called Guest Relations and got the testing rescheduled for 8:00 AM.  The Oceanview Café opens at 7 AM so instead we ordered Room Service for 7:00 AM – breakfast arrived 10 minutes early and we were done in plenty of time to get to our testing venue – Conference Room Beta on Deck 3 forward.

When we go to the Conference Room, there was no one there.  Next door, there were some people from Eurofins getting ready for the testing.  One of the nurses took us next door and swabbed our noses.  The whole thing, which changed our entire morning routine, took less than a minute.  Things went this fast because I had registered both of us on the Eurofins website.  I thought this would be ship wide testing, but it was only contractors and guest entertainers – maybe a list of 15 people.  So, we will not know if COVID is cruising with us or not.  In less than a half hour, my results came back as NEGATIVE.  Ellen never got her results but I can safely assume she was NEGATIVE also as positive results are dealt with immediately.

Based on our experience in Nassau, we cancelled our excursion tomorrow in Curacao.  We do, however, have another beach excursion today – “De Palm Island with Lunch”.  As we checked out of the ship, our sea pass cards were flagged and we had to produce our excursion tickets.  That’s because Guest Entertainers cannot go ashore unless on a Celebrity Excursion.  That makes sense – a sick entertainer is of little use to the ship.

We met our tour at 9:45 AM and walked to our bus – we wore our masks on the bus as it was pretty full. 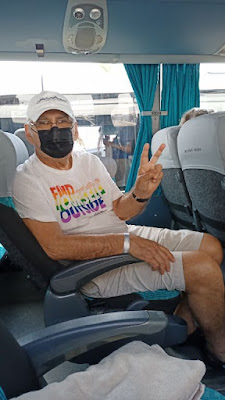 The ride, about 20 minutes, took us through downtown Oranjestad, then out to the highway.  One of the more interesting sites we saw was the island’s desalination plant, which is the biggest in the Caribbean and the second largest in the world (Israel no. 1, maybe). 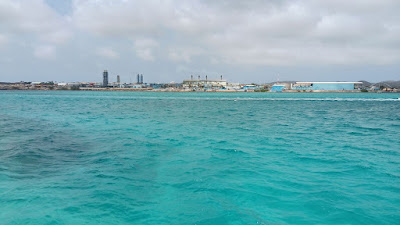 From the bus we hopped on a very basis boat to get to De Palm Island.  The island is a huge water park, with a water slide, beach area, flamingos, snorkeling, food pavilion, and open bar.  There were COVID protocols in place but the only masks were those worn poorly by park employees.  We were on our own to find two loungers in the shade.  Most of the loungers were under thatched umbrellas or trees.  We moved around several times to get the best loungers.  We did get some with a view of the beach area. 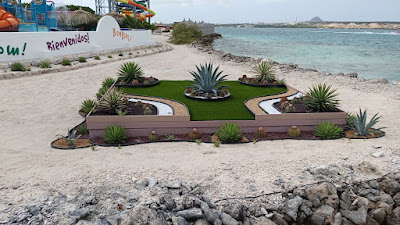 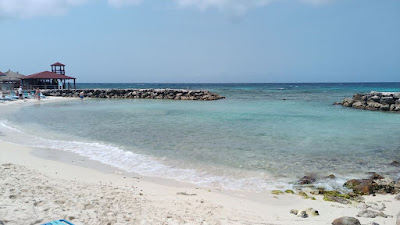 Being under the trees turned out to be problematic as some foreign material (bird poop?) fell from the trees and got on our clothes.  The biggest problem for me was getting out of those loungers, which were only six inches or so off the ground.  The combination of being low and in very soft sand made it hard to get enough purchase to safely stand.  This was taking a toll on my already tricky lower back. We made sure to get pictures of the flamingos before their habitat closing time of 2 PM. 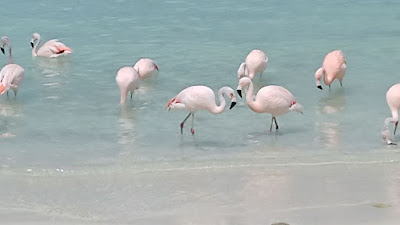 There was an open bar but everything was on tap.  I tried the only beer manufactured on the island, Balashi Beer, and was not impressed.  It might have been better in a long neck bottle.  We certainly did not take advantage of the open bar.

At 11:30 AM, we walked over to the food pavilion.  The people density was high – no masks – and the line was long but moving along at a good pace.  The other thing is that we were one of the few folks that spoke English – most everyone else was speaking Spanish and no one was speaking Dutch.  There was a little papiamento here and there.  Despite the rustic appearance of the food pavilion, the food was plentiful and good. We started off at the salad bar. I had a bowl of potato leak group followed by a green salad with a runny but delicious ranch and thousand island dressing, onions, beans, pasta salad, and potato salad.  From the hot line, I tried the pasta provencal and grouper fillets.  I liked all of it including the grouper which was seasoned with island spices I had never tasted before.  We ate at outside table.  Again, everything was great.  Who knew?

Even though we were in the shade – at times dodging bird poop – it was difficult to read on my Kindle because of the oblique sunlight.  The noise level in the barely distanced chairs was a bit much so we moved to one of the tables near the food pavilion.  There was no island muzak playing there and the chair were easier on my back than the beach loungers.  Besides, there were iguanas wandering by. 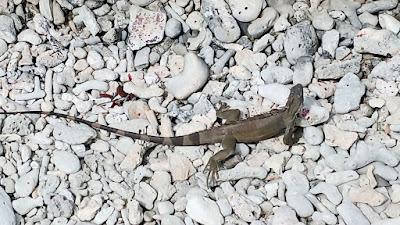 At 3:30 PM, we went to the meeting place and caught a boat to the mainland and then we found our bus.  In a few minutes, we were at the pier.

While, cleaning the sand and who knows what else off my crocs, my back went into warp factor 10 spasms.  I could barely make to the bed to lie down (major ouch) and stretch out.  I took a medical grade anti-inflammatory plus a muscle relaxant and lay motionless for nearly an hour.  There wasn’t much improvement but I was hungry so I quasimodoed to the Ocean View Café, where I had pasta a oglio prepared for me (molto bene) – a couple of slices of pizza finished off the dinner.

Along with Constellation, a small cruise ship was docked here as well – “Fairwinds”. 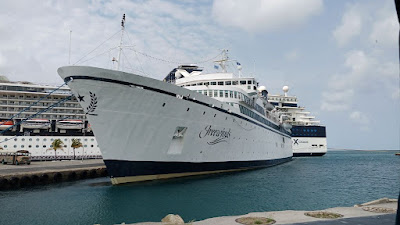 It is not a cruise ship per se (although it was one for a while).  It was the first cruise ship built in Finland; in the late 60s, the ship was sold to the Church of Scientology and has been used for their training and other activities.  There were people on board as well as crew and I found out that the ship does do small cruises around the Caribbean – around the lower Dutch Antilles.  It was there all day and Constellation was blocking its exit from the pier and we weren’t leaving until 10:30 PM.  An interesting ship.

While we were walking (at least Ellen was), I took a picture of her with one of the statues scattered about the ship. 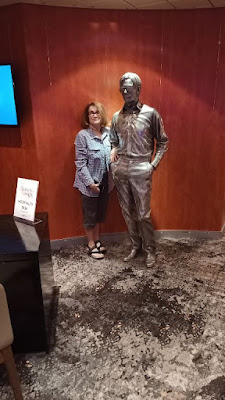 I hobbled my way to the theater so see “Divas 3”, who put on a fantastic show for us on the Edge a few months ago.  Two of the singers were the same (Ruby from Kentucky and the leader of the group from Nebraska) and a new singer from New Jersey joined them.  They did exactly the same song list but this time around, solos were now either duets or trios.  Also, in my opinion, the sound level was too high.  Combined with the fact that the girls scream out their songs, some of the sound was distorted and they didn’t sound as sharp as in their last show.  Still cute and entertaining.  The 7 PM show set a record for attendance as maybe 70 to 100 people showed up.  Some pictures from the show. 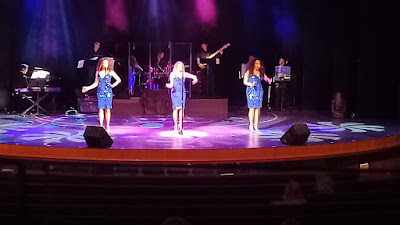 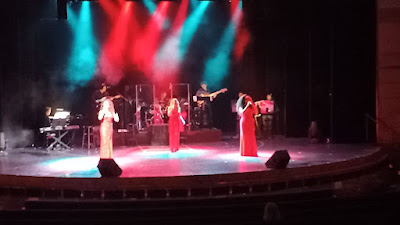 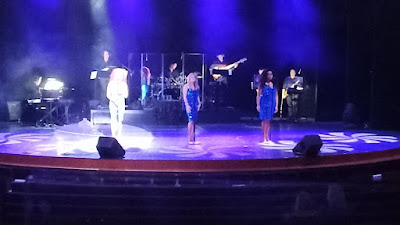 After the show, I went right to the room and stretched out on the bed and tried to mitigate the spasms.  The pain only got slightly better.

I took an Advil right before bed hoping that that would help things in the morning.