The cocktail of drugs did help and I was able to sleep a little and regain most of my ability to walk without pain.

Google revealed our ship's location in Curacao. I could identify some of the landmarks from my vantage point in the Solarium.  I clearly remember the Renaissance Hotel but I can't recall the Starbucks.  The synagogue we have visited a number of times during our trips here was also on the map (top). 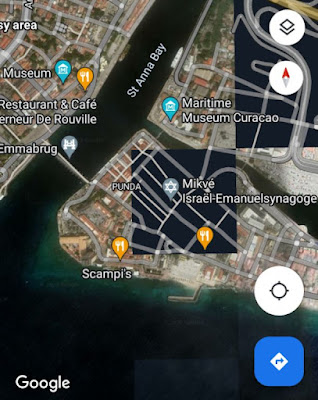 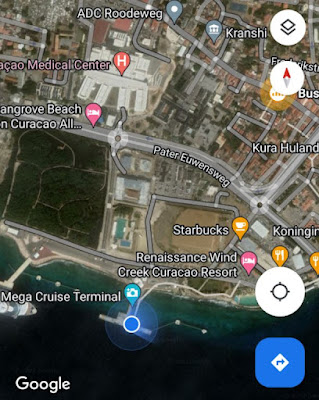 I ate breakfast in the Oceanview Café – the crowd was smaller than expected – I guess people had eaten early to get ready for their day in Willemstad.  I had a blueberry and a plain pancake with cottage cheese and strawberry compote.  A smidge of scrambled eggs completed the breakfast.  It was all good and I also managed to get two cups of hot coffee.  Getting hot coffee is not easy on this ship and I don’t know why.

We spent the entire day in the Solarium, which had open seats galore because most of the passengers were off ship.  We found one lounger and an adjoining circular bed on the side of the ship that faced Curacao.  I spent most of the time reading “The Drifter”.  I find that reading on my Kindle is a better sleep aid than drugs.

The harbor had brought out some dancing girls to greet the ship and entertain the passengers.  The terminal area is shown in the pictures below along with shots of the shoreline of Willemstad and Curacao. 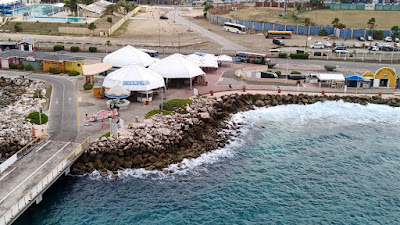 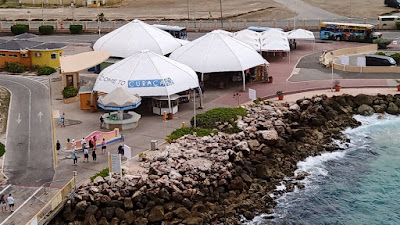 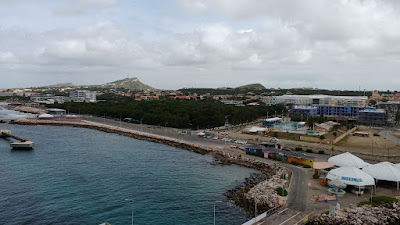 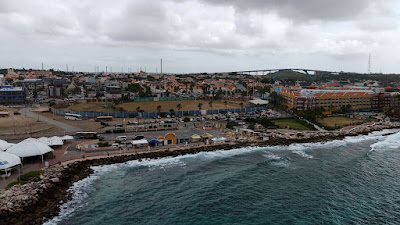 We even ate in the Solarium.  I got a salad and veggie burger from the Café and brought them to the Aqua Spa Café.  Ellen had the Spa Café’s tuna and salmon along with Caprese Salad.  I had a few of their breadsticks.  The only issue with the Spa Café is that they don’t always have iced tea in their dispensers.

While getting my lunch, I was able to take a nice picture of the party band, "Dancing Town", on the pool deck. 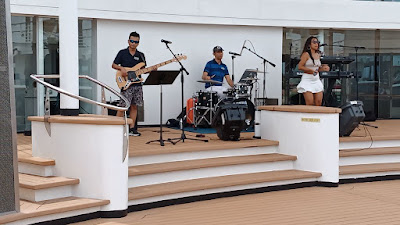 We changed our clothes and went to dinner in the San Marco Dining Room – a check of the menu indicated that there would be food options for us.  I should mention that the Hostess has given us a table for four (but for two) near the aft section of the restaurant.  We have no neighbors so it's a bit safer.  Also, it's a great place to get some nice sunset pictures (if only the windows were cleaner). 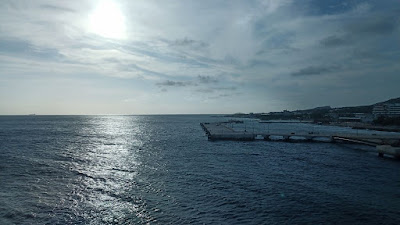 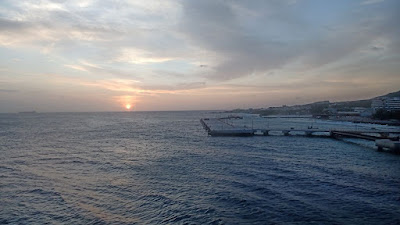 Service was again slow (reasons unclear).  I had the Eggplant Caviar (aka Baba Ganoush) (good) and the Spinach Turnover in Cheese Sauce (good).  I also had the Tuscan Minestrone (hot and OK).  Our main dishes got confused – I wanted the Tilapia Putanesca with creamed spinach.  Instead I got plain fish with creamed green beans (the kitchen was out of spinach).  Our waiter, Limon, quickly rustled up the putanesca version – I wound up combining the plain grilled fish and the sauce (the fish that came with it wasn’t as good).  What saved the day for me was the surprisingly good Gnocchi con Quattro Fromaggi.  Ellen had the plain fish with mushrooms and polenta fries (the setup for another entrée).  She was suspicious of the mushrooms, which were very dark.

We didn’t stay for dessert and instead headed for the theater for Showtime. Tonight’s headliner was Daniel Cielan, award winning magician.  He did have some nice tricks but we had seen all of these in the past.  He always had a long lead up to his magic trick -  maybe a little too long.  He had a pleasant personality but his show seemed too familiar.

We stopped off at the Rendezvous Lounge to hear a little bit of the "No Name Duo".  After a while, we didn’t really care for their style and decided to go the room.  My back was stating to act up so the timing was right.

All aboard was 7:30 PM – again, we did not hear the bow thrusters during the push.  Based on our location on the ship, we should have heard them (like we have on other ships).

Our tour of the ABC Islands is over and now we are heading back to Tampa.