Today, Ellen and I went to the San Marco Restaurant for breakfast.  Ellen had the French Toast and I had pancakes and eggs plus oatmeal.  The meals were OK but again it took time to get them and the coffee was not exactly flowing.  I need multiples cups of hot coffee in the morning.

At 11:00 AM, we went to the Reflections Lounge to hear Gary Koverman, the other DNA speaker on board.  He’s an actual Forensic Scientist that has worked on real cases.  He drew pretty much the same number of folks that I did (I guess this is the lecture centric crowd).  However, he could not get his computer to work with the AV system despite the fact that a whole bunch of AV guys, activity staff, and the Cruise Director all tried to get things to work. In the end, he just gave us some information on his background.

I introduced myself to Gary and the Cruise Director and Gary, Ellen, and I chatted out in the hall outside the Lounge.

Ellen and I went to lunch in the Oceanview Café – I had a veggie burger from the Mast Grill along with some salad goodies.  While we were eating, Gary spotted us and we had lunch together – chatting about everything.  He's a very interesting and personable guy.

After lunch, Gary I went to my cabin to see if I had anything that might help – Gary has a VGA port and the ship uses HDMI – I had an adapter but it was the wrong type – Gary borrowed it anyway to see if it would be useful.

The outside decks were closed today due to high winds so we hung out in the Rendezvous Lounge at a window seat until around 2:00 PM

when we went to see Bailamos perform a matinee show. 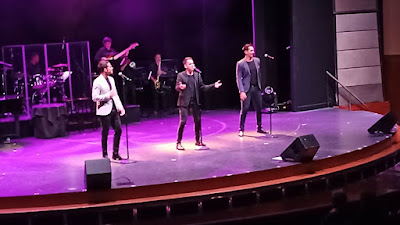 We found out that the boys were Canadian but their Spanish is good that there much be more to their ethnic background.  Another great show.

We had dinner in the San Marco Dining Room.  Ellen has the mesclun greens and the pappardelle con Funghi; I had a veggie compata (off the veggie menu), a green salad and the Penne with spinach, sundried tomatoes, in creamy gorgonzola sauce.  Both pastas were excellent. We both had apple pie (no ice cream) and I tried the coffee custard.  The meal took a while but the food was very good.

We passed on Jakub, the violinist’s show, and instead went to listen to Dancing Town, the smooth listening Dance Band in the Rendezvous Lounge. 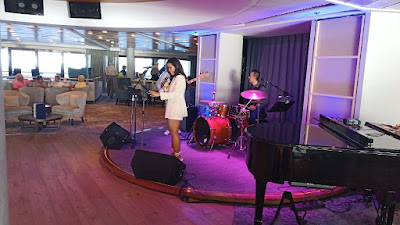 They are good and not too noisy.  We watched their whole set.

From there we went to the Reflections Lounge to watch the Challenge Game Show.  It was fun and I knew most of the answers.

Then back to the Rendezvous lounge for another set from Dancing Town.

Seas are a little rocky but manageable.  Room is quiet.