Slept OK – in two shifts – up about 3 AM and then back to sleep until 6:30 AM.  The seas were smooth and the room silent so no external facts were responsible.

I went to the Oceanview Café just as sit opened in anticipation of a great breakfast.  I had a waffle but was told that there was no cottage cheese on board. 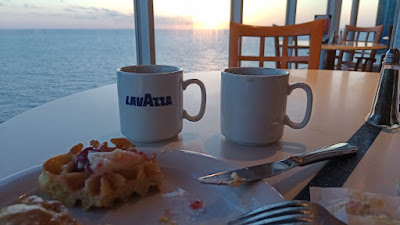 I wound up having that waffle with strawberry compote and whipped cream, scrambled eggs (really good), and mini buttermilk biscuits (over baked but good when dipped in my coffee).  One of the suits told me they might buy some cottage cheese in Nassau - not likely.  I did however, get treated to a lovely sunrise. 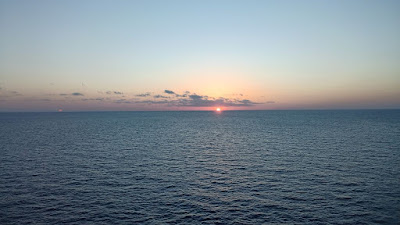 The Cafe has these view ports on the floor near the windows - I always sit by the windows and away from anyone else. 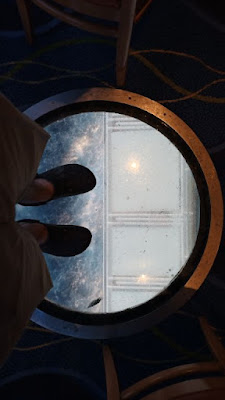 I arrived at the Reflections Lounge at 10:30 AM -- they had trivia going.  Everything was all set up for the talk – “Mystery of the Romanovs” - all I had to do was plug in the HDMI cable and turn on the headset mic.  I expected the trivia crowd to leave (based on past experience) but, not only did they all stay, but there were joined by a large crowd of new folks.  By the time I started, the Reflections Lounge was bustling with passengers – based on a capacity of 416 people, I would estimate that there were about 200 people in attendance (or about 25% of the passengers – based on a new bit of intel that said there were only 800 people on board). I was both surprised and pleased at the turnout and even more pleased with the level of engagement of the crowd.  The talk went very well – good pacing and a few well-placed bits of humor. Good feedback from people after the talk, which ran about 50 minutes. 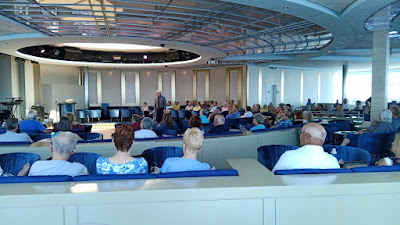 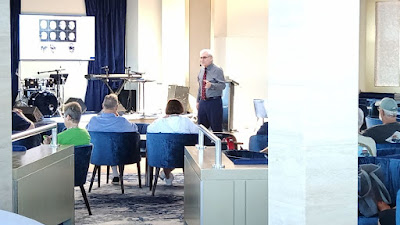 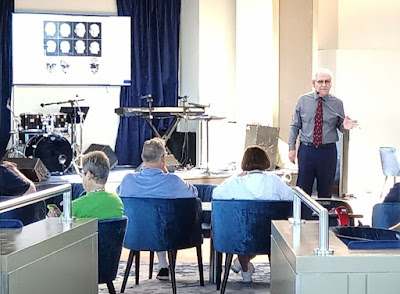 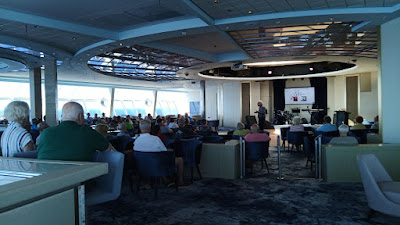 We spent the afternoon on the open deck and also did some exploring of the ship.  Constellation had undergone a refurbish since we last sailed on her and we were curious about the changes.  One of the pleasant surprises was the Rooftop Garden, a venue similar to the one on the Edge Class ships. 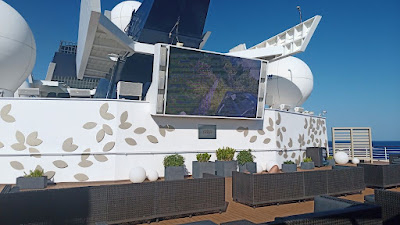 This was a place for viewing movies and participating in an occasional special culinary event.  (As it turned out, high winds kept the open decks and the Rooftop Garden off limits for most of the cruise).

Dinner tonight was in the Oceanview Café.  I really like the Pasta Bar and tonight I had the chef prepare spaghetti with alfredo and marinara sauce plus tomatoes and onions.  Very good.  They also had a patriotic flag that I had to get a picture of.  I guess nobody wanted to cut into it. 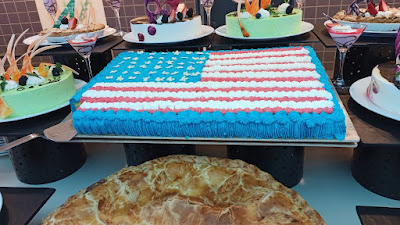 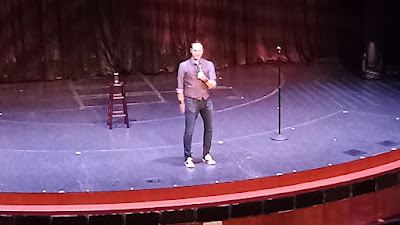 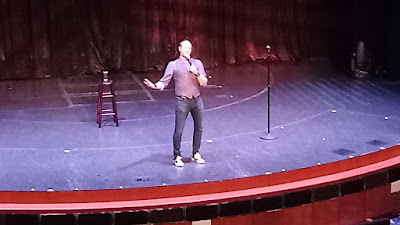 He's from Texas and a little hard to understand but funny.  He had a very small crowd – maybe 40 people.  Audience cringed at some of the jokes – especially the Will Smith slap jokes – too soon, I guess.

Seas are still smooth – our neighbors are the Bailamos boys – they are quiet after they get into their room.