Because its location, our room turned out to be absolutely quiet.  That, combined with a pretty comfortable and large, bed resulted in a decent night’s sleep.  I was awakened around 6 AM by what must have been trash trucks.  I was up so early that I caught the sunrise from our room. 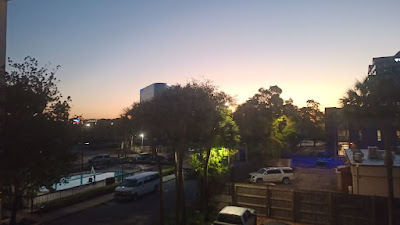 Breakfast is served between 6 and 10 AM and I was down there a little after 6 AM.  I stopped off at the front desk and inquired about a shuttle to the cruise port and she said they did have one (contrary to what I had been told on the phone by the hotel weeks earlier) and that it was $10 per person (much cheaper than an Uber or certainly a taxi).  I signed us up for the last shuttle at 11:30 AM.

Breakfast was in the lobby area with the food in the adjoining room.  I had a waffle, a premade cheese omelet, and some oatmeal.  It was all pretty good.  I was the only one wearing a mask (Florida, after all).

I went down later with Ellen and this time, they also had buttermilk biscuits.  I had two of them and they were really good with butter.

At 11:15 AM, we dragged our bags down to the lobby to check out and wait for our ride.  The desk clerk had told me that I would be paying the driver in cash but she, instead, added the $20 to the hotel bill.  We didn’t have to wait long; in a few minutes, we got on our shuttle to the Port of Tampa.  The ride to Terminal 6 – Celebrity’s Terminal - took about 20 minutes and provided a mini tour of downtown Tampa.  Constellation was the only Celebrity Ship here today.  The next terminal over had a RCL cruiser docked.

Because I had checked in online, I knew our cabin assignment – Room 2073.  I filled out room tags and handed the bags off to the porter.  I assembled my documents:  Boarding Letter, vax cards, and PCR testing results and we made our way to the entrance to the terminal.  There was no line.  The woman really went over our papers and highlighted the key items.  We told her we needed to meet with the Pier Coordinator and, after going through security, we were escorted to a check in area at the end of check in area.  While showing the agent our documentation, she told us that our cabin had been changed to 3020.  Cabin 3020 was on the starboard side of the ship just past the Celebrity Theater but on the opposite side of Q-Sine (the source of noise on this ship).  We were told that we could board the ship (even though we were supposed to have a “wellness check” at 2:00PM.  We were also told that our Sea Pass cards would be on the cabin door and that the cabins were ready.

Cabin 3020 is an Oceanview cabin with a large window – it has a huge bathroom, compared to some of our ships.  It also has a desk and a mini couch. 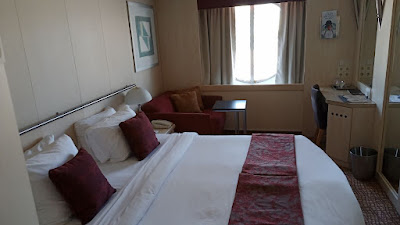 We put our valuables in the safe and went up to the Oceanview Café – Deck 10 – for lunch.  There were very few people up there and we had some salad and pizza.  Tampa does not have the spectacular views of Miami because the area adjacent to the port consists mainly of parking lots.  The skyline, however, was also visible and look at those blue skies. 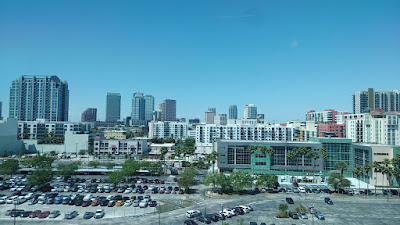 I got my letter from the Activities Manager outlining my lecture schedule (only three lectures of the six I was asked to submit).  There was nothing in the letter about meeting with the Activity Manager or filming an advert video.  That was OK with me.

There was no in person Safety Drill on Constellation – the Cruise Director is Mike Gibbons (never sailed with him) assisted by RoXstar (stage name), Claudia, and Laura. There are others but I don’t deal with them.

We watched the sail away from open deck 4 – the port side was all commercial docks with ship building and boat repair being the main activity.  The starboard side consisted of nice homes and condos and an airfield for small planes (that's me and the airfield in the background). 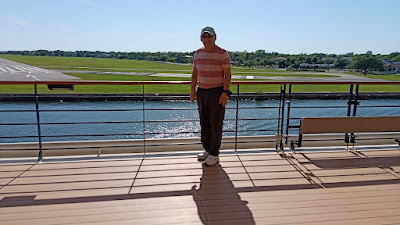 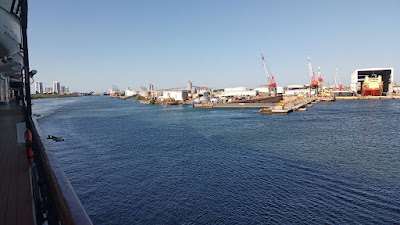 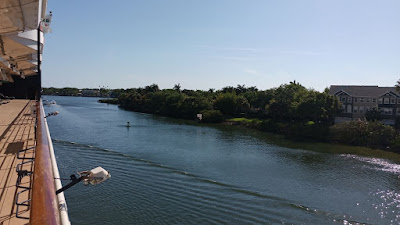 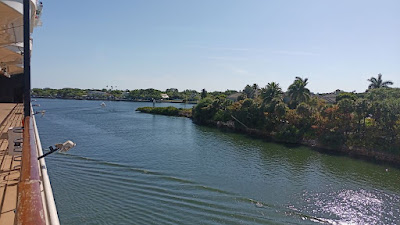 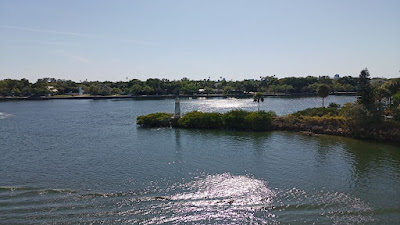 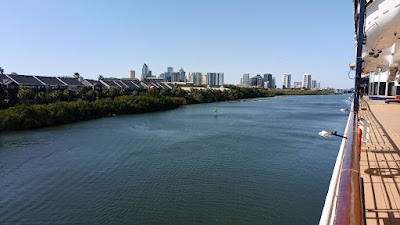 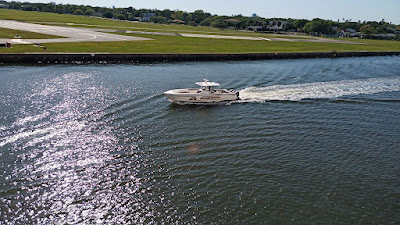 We had a sheriff department gunboat escort (above) out of the Tampa area.  t would take an hour to get into the Gulf of Mexico and would involve going under the Sunshine Skyway Bridge.  This bridge used to be scary to cross in a car but much less imposing going under it.

I had loaded the Celebrity App and it told me that we were signed up “Celebrity Select” Dining at 6 PM in the San Marco Dining Room.  I also checked out the menu for tonight and it included trout, Ellen’s favorite.

We gave our room number to the hostess and were seated at a table for two away from people (window seats were already taken at 6:00 PM).  Kenneth, our waiter, took our order after a bit of a wait.  Ellen had a green salad and the trout and I had a Cesar Salad and the Salmon with Hollandaise Sauce.  The dinner took a long time to arrive but it was OK.  We are going to take going to San Marco a day at a time – depending on the offerings.

Ellen wanted to check out the ship and I went to the theater because I heard some music.  What I thought was a rehearsal was actually the 7:00 PM Showtime show.  The group was called “Bailamos” ("to dance" in Spanish) and it consisted of three guys with excellent voices doing Latin themed music.  There was essentially no one in the audience.  I was alone in the balcony. 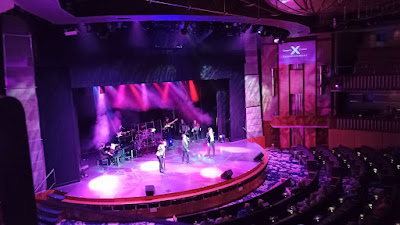 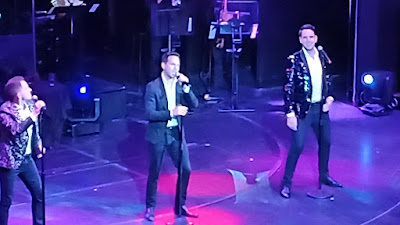 They were sort of a Jersey Boys/Mariachi combo.  They sounded great and moved great but they were singing at lethal decibel levels.  Ellen came in at the end thinking that the show would be at 8:00 PM.  We decided to catch the first part of their show at the 9:00 PM show.  There were maybe 30 people at the show.

We did just that (they were not as loud in the second show).  There were more people at this show but still not what would be expected.  We found out from one of the crew members that the ship was sailing with 900 passengers (Capacity about 2170).  That would explain the crowd size.

In reading the introduction letter, I hadn’t noticed that my first talk would be tomorrow at 11:00 AM.  I didn’t feel I needed to go over the talk.

After the show, we went to the room and wound down.  Not sure if we have any neighbors.  The room is very quiet.