I'm up early because I want to go to a presentation at 10 AM.  Another beautiful sunrise captured from Cabin 3020.  Some interesting clouds and a little chop in the seas but otherwise another day in paradise. 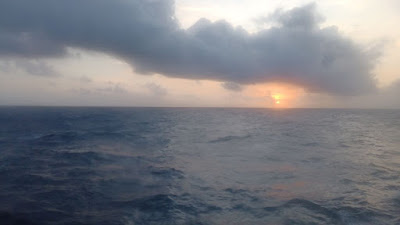 Breakfast continues to be in the Oceanview Café – still a chore to get cottage cheese but the suit in charge gets it for me.  So a waffle with cottage cheese – scrambled eggs and a buttermilk biscuit again rounds out my breakfast.  The scrambled eggs on this ship are for the most part the best since those on Celebrity Edge and Apex.

At 10 AM I went to the Theater to hear Gary speak about Jon Benet Ramsey.  I was hoping to learn something new but the information was generally what I knew.  One thing I had not seen was the crazy ransom note that had to be written by an inept individual as evidenced by all of the odd syntax and word usage.  I don’t see the Ramseys writing such a bizarre note. Anyhow, I did not get any new insight into the murder.

We had lunch in the Oceanview Café – the usual fare – salad bar – tuna salad and egg salad.  This combination has turned out to be a winner for lunch - plenty of protein and usually very tasty.  Today, I went all out and sprung for a beer for lunch - Leffe Beer - recommended by our waiter from Quest, Tin (I hope he has totally recovered from his COVID experience). 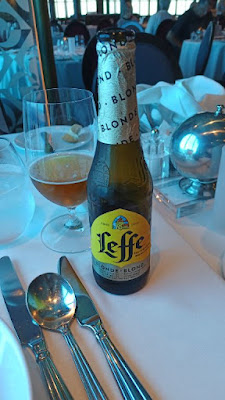 During lunch, I also got some nice pictures of the Caribbean. 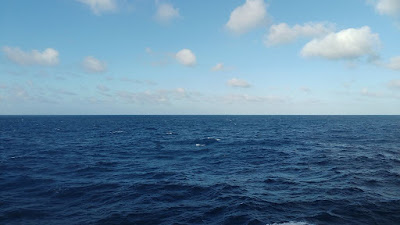 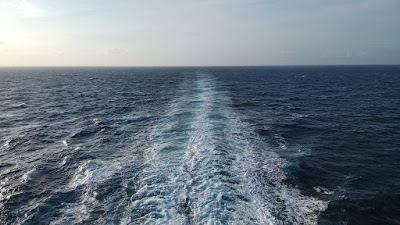 The weather conditions were perfect to create another iconic picture of Ellen at the railing. 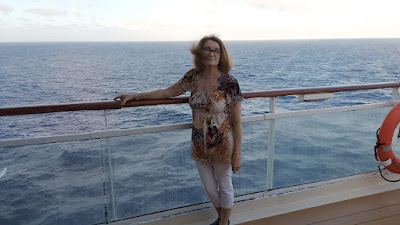 In the afternoon, we went to the Reflection’s Lounge to watch “Deal or No Deal” – we had never seen this game before and it turned out to be quite entertaining (RoXstar always makes his sessions funny).  One contestant won $412 and the other $0.25.  You have to buy into this game – I don’t know the ticket price but I’m sure it was more than 25 cents.

The rest of the day was spent in the Solarium.  We found loungers with a view of the water and far away enough to be fairly safe.

After dinner in the Oceanview Café, we attended Showtime with CW Soloist/Guitarist Antonio Larosa. 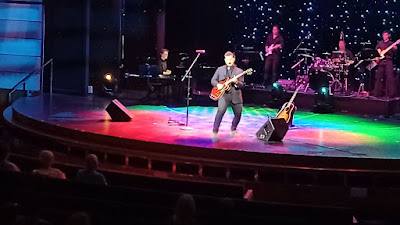 He had a nice voice but the sound was amped up and when the guitar solos started we headed for the doors.

We wound up in the Rendezvous Lounge listening to the soft sounds of “Dancing Town”.  This group is very similar to many Filipino groups we have seen in the past – a female lead singer and three backup guys.  I asked the lead singer to do "Hallelujah" and she did - only three verses or so but still a nice arrangement. 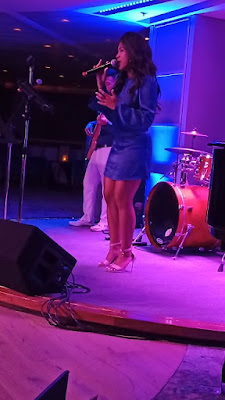 I had a discussion earlier with Mike, the Cruise Director, who indicated that he might want to add “Jack the Ripper” to the program on the final day of the cruise (substituting Gary’s talk).  He said he would let me know.

My back was still bothering me so we headed to the room.