Our next scheduled stop is Key West FL but the situation is being monitored by the Captain and Miami Office.  In any event, today is an actual sea day and the weather does look good.

I went to the Ocean View Café for breakfast this morning – I again moved my table and chair (the first one on the port side window by the Coffee Stations) a little further away from the table behind me.  For some reason, with all the available tables, people still cluster (must be sociological explanation for that) so putting an extra two feet of distance between my table and the next is good.  Laterally, the tables are marked as unavailable so that’s good (unless it is crowded few people sit in the tables next to the walkway).

I had my usual waffle, cottage cheese, and strawberry and marmalade breakfast – the man in charge up there asked me if I was ready for my sour cream (they are now fully trained).  The breakfast was very good and I will never tire of it.

I still had plenty of time to get ready for my next talk, “Forensic Detectives: Identifying the Famous and Infamous”, which this morning is scheduled for 10 AM.  This is how COVID on board can affect you – I actually wiped down my headset mike with sanitizer for the first time.  Who knows who used that last and it is really close to one’s mouth and face.  Can’t hurt.  The turnout was good with about 40-50 people present.  My delivery was OK and the talk ended in under 45 minutes. 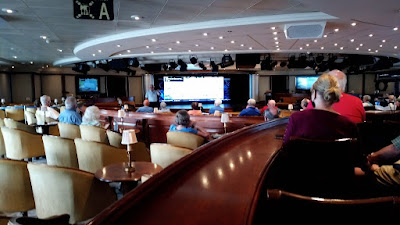 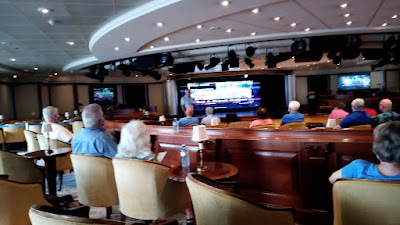 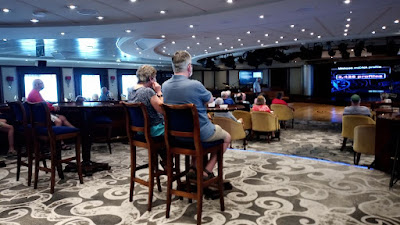 We had lunch on the back deck of the Windows Cafe.  The sky was spectacular during our lunch. 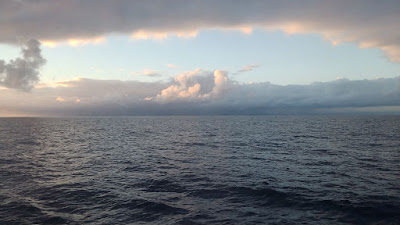 Reading, sometimes snoozing, and always relaxing was the order of the day.  We have been fortunate to find shady side loungers on Deck 5.  The breeze keeps everything cool and fresh and makes it more difficult for COVID to do its thing.  I’ve also noticed that some people are wearing their masks outside on Deck 5 – even when sleeping.  I believe these folks are either from Europe and are probably hoping to test negative so they can get home or people trying to be extra careful.

Puerto Rico (of high positivity fame) was visible on the horizon. 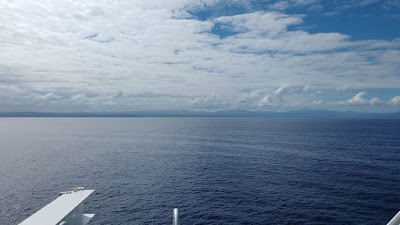 At 4 PM, today, we went up to the Living Room to get a good seat for “Live Music Trivia with Tanya and Aleks” (pianist and band master).  To do so, we also were there for the daily “Pub Quiz”.  The activities on Quest do not award prizes but participation stamps which are redeemable for swag at the end of the cruise.  The music trivia category today is “Broadway Shows”.  Tanya and Alex did a great job of singing the first few lines of a song – it was like a mini concert of sorts.  I felt that Tanya’s best song was “Seasons of Love”.  This was quality entertainment in the afternoon and broke up the long day.  Quest and other cruise ships need this kind of entertainment to complement the evening shows.

We had dinner up in Windows on the back deck. We ordered special meals (braised Kosher ribs for Ellen and a Beyond Burger for me) and found a table away from other folks.  The meals were good, and we stayed for a while to have some coffee and tea.  The back deck has been the place to go to reduce risk and have a relaxing time.  And of course, the views and the stars. 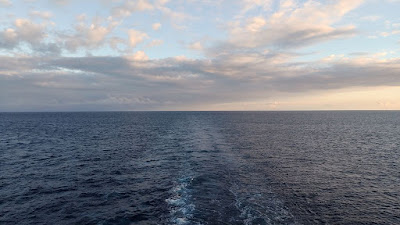 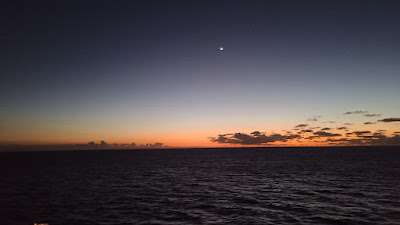 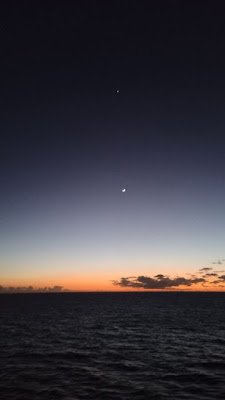 We passed on Sasha and Dima’s first show (they were back after leaving the ship for a while – we ran into them in Windows and they told us that Dima had gone to Las Vegas (to work?) and Sasha had returned to Ukraine).  They are real jet setters.

We were back in the room early – the temperature control in the room has improved because Ellen has kept the window shades open to let the Sun warm up the cabin.  That has made a difference.

I got a call that Key West might not work out and I should be prepared to do an eight talk.  I said that would be OK.  This is getting pretty crazy.

A bit later, the captain confirmed that Key West would not allow us to dock so he will be looking at Nassau Bahamas as our final port stop.  The ship has changed course in anticipation of that happening.  Negotiations with Nassau have begun.