We are docked closer to downtown today and we are here with Crystal Serenity and Seven Seas Explorer. 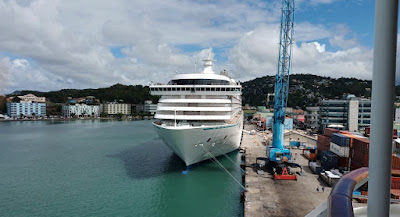 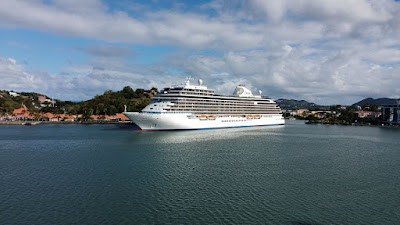 I got a call from Tanya indicating that the ship would not be stopping at Mayreau, in the Grenadines because of COVID issues and would I do a lecture at 10 AM on the upcoming extra sea day.  I went to her office and suggested “Cold Cases Solved” which was part of the first cruise and not on this schedule.

Other than the itinerary change, an ordinary day, with breakfast in the Windows Café (waffle combo). I went up with Ellen to get her breakfast a little later in the morning.

I tried the special “Sandwich of the Day” in the Windows Café for lunch.  It was a veggie wrap (mostly eggplant) grilled on the panini maker.  I dipped it into Thousand Island Dressing to give it some more taste.  It was OK but not special.  I had the onion rings with it and a diet coke.

We spent the day on the open deck which would have been great were it not for the fact that today was "touch up" day.  Several painters painted over scuffs and bare areas on the white railing.  They were using some kind of oil based marine paint and it was very pungent.  We were only saved by the stiff breeze across the deck.

While out on the deck several passing rain showers wetted down the outer parts of the deck – we were under a lifeboat, so we stayed dry.  Across the harbor, where we docked last cruise and where the little shopping area was located (and the St. Lucia sign), there were no ships today. 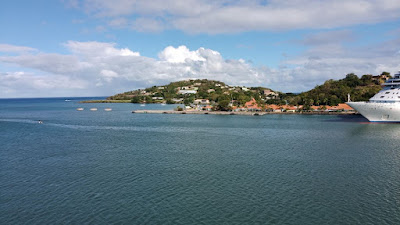 From Deck 5, I witnessed an usual event. An NCL ship was approaching Castries and then turned and did not enter the harbor. 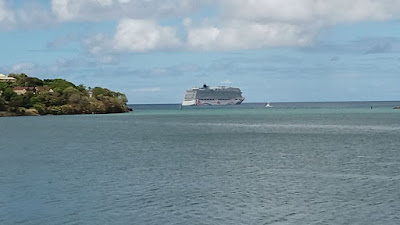 In his evening announcements, which went to all the cabins, the captain said that three crew members, who were serving the COVID patients were now positive and was an additional passenger, who reported to the med center with mild symptoms.  He reemphasized the importance of masks and asked for assistance from crew and passengers in reminding fellow cruisers if they were not complying.  Additional mitigations were put in place – limits on how many people can ride together in an elevator and stricter social distancing in the dining areas.  COVID protocols have definitely kicked in.

We came up a with a good plan for tonight’s White Nights Party.  There was nothing on the menu and we were tired of the standard Discoveries Menu, so we got about eight tuna brioches and two Caprese focaccias from the Mosaic Café and had them along with Diet Cokes for dinner in our cabin.

Tonight, because of COVID protocols, there were two separate White Night sessions at 6 and 8:30 PM (for Muster A and B, respectively).  At 8:45 PM, we went up to Deck 10 and got some seats opposite the stage.  It had rained and most of the attendees were sitting under the overhangs along the edges of the deck.  Many of the songs were different – “The Fourth Element” was the backup band at the start and then the Quest Orchestra took over. The rain and maybe COVID kept the attendance low. 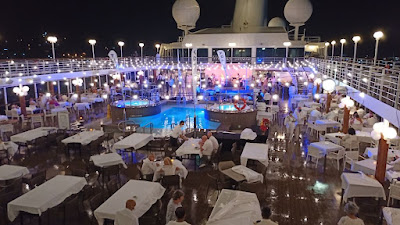 There were the standards – “Dancing in the Streets” and some songs I didn’t know.  Tanya sang a song in a non-operatic key and Justin did “Love is in the Air”.  We had some cookies for dessert and after about an hour went back to the room.  Considering the situation, the crew did a good job of putting together the evening.

Tomorrow should be an interesting day.