Room service (waffle combination) arrived at 7:00 AM.  All good as usual.  One thing I am missing is eating my breakfast and watching the sea go by.  And I also like to read something when I have breakfast.  While it might be safer to eat in the cabin, I have been pretty good at finding seats that are safely distanced from other guests.  The only view I could get was from the cabin.

I went to the Cabaret Lounge for my third talk, “Forensics and History: The Search for the Unknown Titanic Child”, which was scheduled for 9:00 AM.  When I got there at 8:45 AM, the doors were closed and no AV guy was present.  After a few minutes of waiting, I called the Operator who connected me with AV.  He actually arrived while she was calling him.  I set up quickly. There were about 20 people present because, as I suspected, COVID testing was underway in the Living Room. 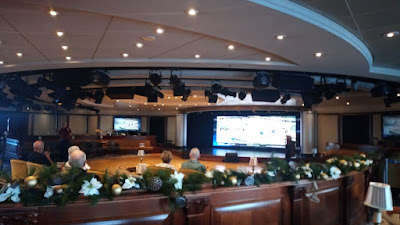 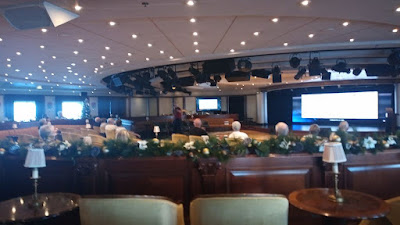 The talk ran 47 minutes and I felt that the audience was engaged.  One person had to leave because she was scheduled to be tested at 9:45 AM.  I broke my setup quickly (carrying my power chord loosely and my computer and case separately) and tried to answer a question from a passenger while on the run. I took a seat in the back to put my stuff together and watched Chuck setting up.  He was having some kind of problem as he and the AV tech were staring at his computer and there was nothing on the big screen.  I left before he started.  (Note: Tanya left a phone message that I had run over my 50 minutes this morning – I spoke to her later before the evening show and told her that I time all my talks and I try to keep them all under the time allotment, which I will keep doing.  I think I squared things with Tanya.  Chuck was trying to blame me for a technical glitch that caused his late start.  That's one thing I would never do - complain about another speaker).

I met Ellen up on Deck 5 Portside and we stayed there until lunch.  I got a little carried away and took a lot of pictures of Roseau as well as another iconic Ellen picture. 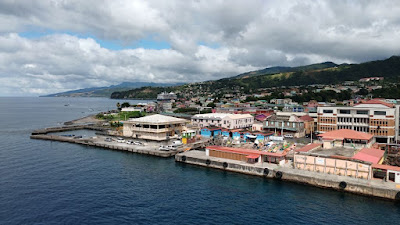 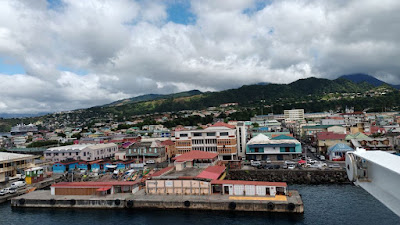 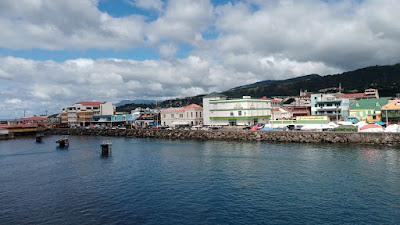 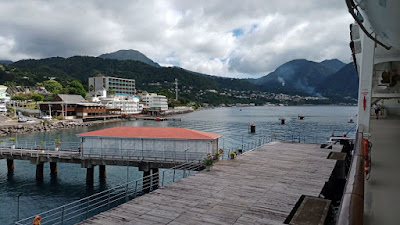 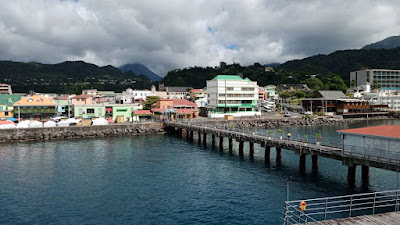 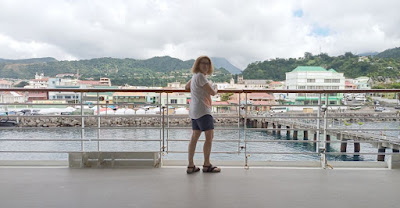 We got nice seats up on the Windows Café veranda.  I ordered a Beyond Burger with extra coleslaw (creamy and tasty) and thousand island dressing (goes well with the Beyond Burger).  Along with the always good onion rings, this burger was the best lunch of the cruise.

While we were eating, the captain came on the PA and said that testing had resulted in two positive cases (confirmed by PCR) and that meant that everyone would be tested today (and not tomorrow for some).  To add to the sense of urgency, people would be called by deck number and Deck 4 was the last deck called and we got the word while out on the open deck.  There was very little wait up there (Tanya was handing out the accessioning bar codes) and Ellen and I got tested very quickly.

We stayed out on the open deck for the rest of the afternoon. It wasn’t long before we both got our NEGATIVE results back via email.

Dinner was in the Discoveries Restaurant – I had spaghetti marinara (special ordered) along with a Samosa and a Cesar Salad.  Ellen had the standard Salmon and a green salad.  We opted out of dessert in the restaurant.  There were new COVID protocols in place in the restaurant – no breadbasket at the table, for instance.  Our server was dispensing rolls on request. Something was going on.

I did get a nice sunset picture from our table window. 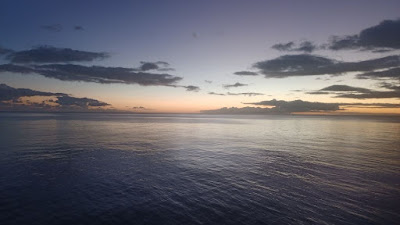 While in the restaurant, the captain broadcast the results of the COVID testing.  There were 12 confirmed positive results and all but one person was asymptomatic (mild symptoms in the last person).  We settled on dessert up in the Patio – frozen yogurt and toppings – we had our coffee and tea up there as well.

We went to Tom Seals' second show, which was as entertaining as the first one.  Not as much boogie-woogie as I thought there would be. 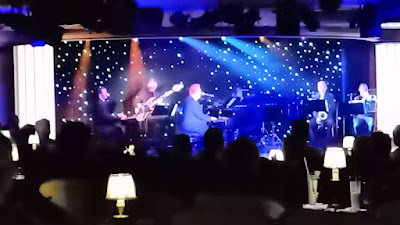 So, it was quite a day, and we are now back in our room.