It's a new year but it hasn't started off that well - COVID cases (new variant) are skyrocketing, people still going at it about masks and vaccinations.  The virus must really be enjoying the human drama.

I probably had the best night’s sleep of the cruise last night – don’t know why but it will help with overall mental and physical health.

I had breakfast up in the Windows Café – the usual, of course, of waffles etc.  I did get my sour cream without asking.  I ate on the veranda away from people and the breeze certainly was a positive epidemiological factor.  I was up there just a bit after sunrise. 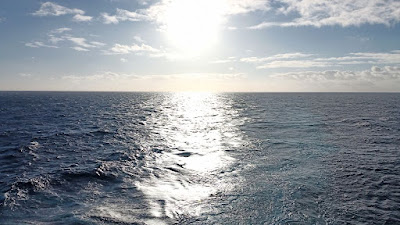 I am speaking at 10 AM today – “Forensics and History: The Lost Dauphin of France”.  I went back and forth about including the OJ Simpson stuff and finally decided to keep it in because two guests from the UK told me that Colin Pitchfork was back in prison for violating parole.  Sounds like a good way to bring in OJ.  The audience – about 30 folks or so – were very much into the talk (especially the OJ part).  In contrast, I tripped over some words, forgot key facts in the OJ story and didn’t quite have the rhythm during the main part of the talk.  I noticed Tanya in the back of the theater midway through perhaps checking out the attendance.  Anyhow, it was not my best effort even though some guests gave me positive feedback on the session.  I plan on doing better the next time.

The ship put together a New Year’s Poolside Brunch from 10 – Noon, so Ellen met me in the theater and after putting away my computer, we went up to check it out – this would serve as lunch today.

It was the standard brunch of salads, eggs, fruit, etc.  We tried the quiche and scrambled eggs – they both could have been hotter.  The waffle maker broke down and fresh waffles could not be had (with fruit and whipped cream) so we settled for older and cold waffles.  We finished up and headed for seats on Deck 5.

The route that Quest was taking (and at very low speeds) was along the West coast of Martinique. 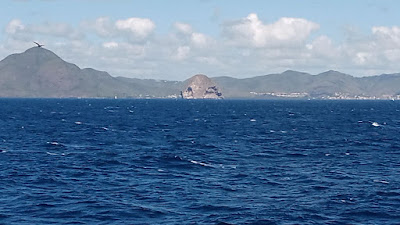 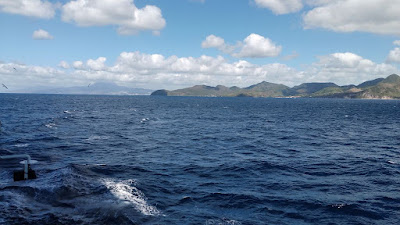 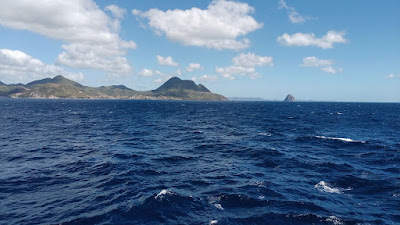 It took all afternoon to go the length of the island and it was only as dinner time approached, that the ship accelerated.

The captain’s update was pretty much unchanged – 17 COVID passengers; 16 COVID Crew plus another 60 crew in quarantine.  Later, he came on and said that we would be bypassing St Kitts (St Kitts has a COVID positivity cutoff of 1 percent and we are running a bit over that) and would instead be stopping again at Antigua.  Shorex would have to put together some excursions pretty quickly and as we learned from our last time here, there will be a temp check at the pier as well as a mask requirement full time.

I am still trying to find a book – I checked out a Will Robie book from the library only to find I had started this book once and didn’t like it.  When I checked it out it was at the page that I left it at.  I will give book searching another go tomorrow.  My usual authors, Preston and Childs and David Baldacci have not written any new novels in the Pendergast and Atlee Pine or Memory Man series, respectively.

We had ordered veggie versions of dishes on the Discoveries Menu earlier.  I had the Conchiglie with Ricotta and Spinach – very rich but OK. Ellen had the Polenta (sans seafood) which was OK as well.  We both had green salads and we shared the Cherries Jubilee and NY Cheesecake desserts.  We did have coffee and tea in the restaurant but didn’t stay long.  I should note that the restaurant was not very crowded.

We went to see Jason Bird’s second of three shows today (a matinee).  Again, he was fumbling around a lot and his tricks were really well worn.  We’ll have to see how things work out for him on cruise ships.

I developed a slight headache and queasiness, so I wanted to go to the room, which to our surprise was not freezing.  Ellen had left the shades open and the sun had warmed the room throughout the afternoon.  I captured the sunset from the cabin. 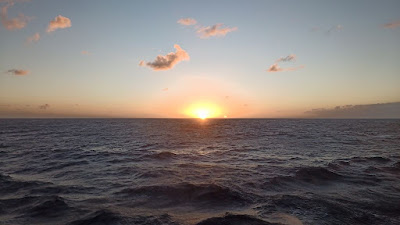 There is a little shimmy but no big deal.