It's a beautiful day in Barbados, a port that still welcomes cruise ships (kind of; bubble tours only and only with COVID negative passengers).

Got a nice socially distant seat in the Windows Café – I actually rearranged my table to be further away from the table behind me.  I had a nice waffle with the fixings (one of the waiters said he would bring me sour cream every day for the rest of the cruise – he volunteered). 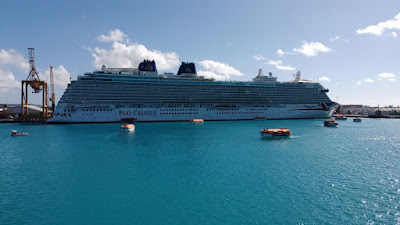 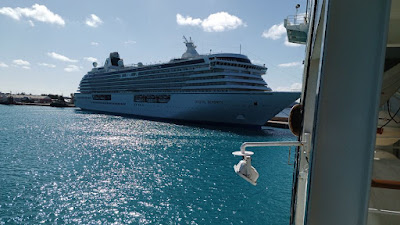 I don't know how many passengers were onboard Serenity but I did not see much sign of life from our vantage point.

The captain told us that later on in the evening, the QM2 would be taking our berth and we would hang around the port until 10 PM or so and then depart.

After breakfast, I spoke to the head suit and asked him if we could order a special meal and have it on the veranda on Deck 9.  I ordered green salads and Fettuccine Alfredo and Salmon.

The captain made a morning announcement that more crew members had tested positive for COVID – the total was now 17 and that 60 close contacts were also being quarantined.  The working staff was really reduced, and we should expect some delays in some services.  The number of positive passengers was now 16 – all but two were asymptomatic and mild symptoms were in the remaining two folks.  Everyone was still in isolation (actually on Deck 4 Forward).  More reminders about masks and social distancing.

Danny came on and indicated that the New Year’s Eve Party would follow his own show “Moving Through the Movies”.

(Based on the testing results new COVID protocols were put in place: Capacity limits in venues, limit on people in the elevators, and a barrier in front of the Guest Services desk.  The seats in the theater were still too close even though the nightly announcement said they were socially distanced.)

Tuna wraps for lunch (not so spicy today) and a new beer, Leffe from Belgium (recommended by Tin, our Croatian waiter) comprised my lunch up in the Windows Café.

We took advantage of the pleasant conditions in Barbados and spent the entire afternoon on Deck 5 with a view of the two other ships.  I finished my book – all of the action happened in the last few pages.  Too many words and explanations leading up to that climax.  Also, my favorite character was killed off rather early, which was annoying.  It was an early Reacher Book so maybe it was different from the others, which I have read.

We also had a chance to watch an interesting lifeboat drill carried out by the Britannia.  All her lifeboats were lowered and they formed a circle and sailed in this circle for several minutes.  Not sure of the purpose but it was amusing to watch. 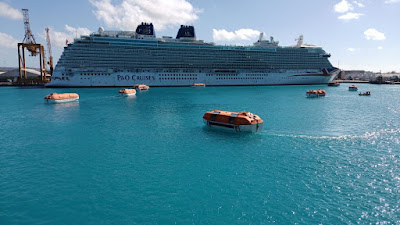 We went to the Windows Cafe for Dinner and our meals were indeed there.  The pastas were disappointing (not creamy Alfredo but something a lot thinner).  We ate some of it and stayed up on deck in the open air to drink our coffee and tea.  Another terrific sunset. 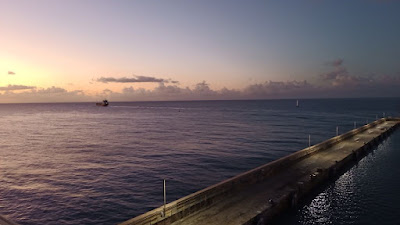 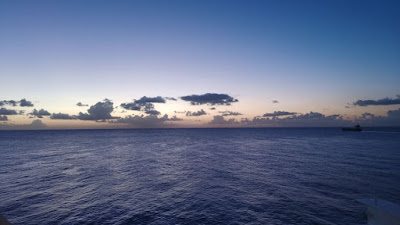 I had been tracking the locations of all the ships in Barbados and I knew that QM2 and Queen Victoria were both offshore.  At around 8 PM, Quest departed her berth.

As we pulled into open waters off Barbados, we could see the other ships still docked. 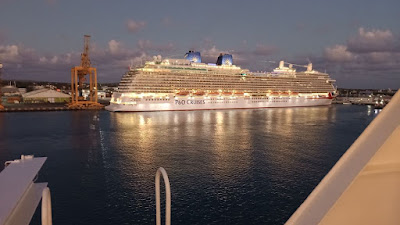 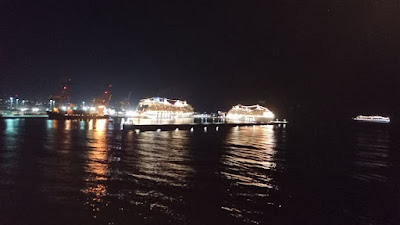 In a short while, we watched the huge QM2, all lit up and COVID loaded, pull into the port. You can see the iconic red Cunard stack. 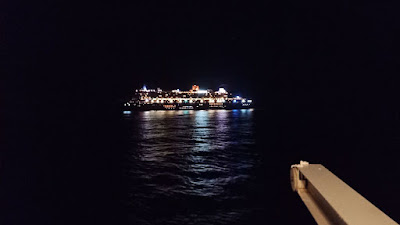 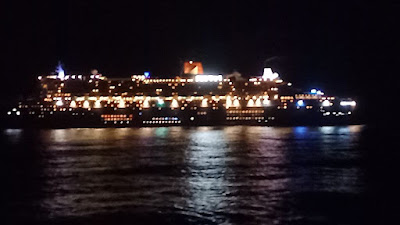 The Queen Victoria could be spotted offshore, where she was anchored. We, predictably, could not stay up until Midnight so we missed the New Year's Eve Party as well as the fireworks show put on by Barbados.

I did take a picture of Barbados all lit up at night. 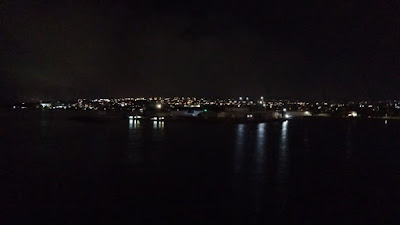 It has not been a good year and it ended appropriately.