Still waiting for a nice day at sea… 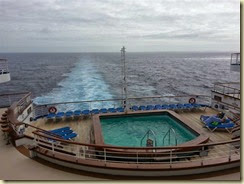 What a difference a few months make…

What started off as a smooth evening turned into a very rocky ride about 3 AM in the morning.  Accumulating a huge sleep deficit.

Well our little rollercoaster cabin is now official with the “Placing of the Name Tag” ceremony.  Even with the name tag, the Hotel Manager, one of our neighbors here on Mt. Olympus, stopped and asked us what we were doing in the crew area.  A good question when you think about it. 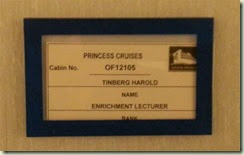 This morning, I headed down the long hall of Deck 12 (over 250 paces – yards) to the Horizon Court.  I had a bowl of very good oatmeal and a chocolate chip pancake and a fried egg.  The coffee was good and hot.  I brought some boiled eggs and watermelon back to the room for Ellen.

Tonight is formal night 1 so I made reservations for the Dining Room for 5:30 PM.

After breakfast, we sat out on Deck 15 Aft for a while but I retreated into the “One 5” Lounge because it was too chilly and breezy on deck.  I went through my talk for the day and made just some minor changes.

At 11:00 AM, I went to the Trident Grill and Pizzeria to order a veggie burger.  This was a most unusual veggie burger consisting of potatoes, mushroom, and other unidentifiable veggies.  It was very soft and squished out of the bun with every bite.  It did taste OK but I think I will be passing on the veggie burger from now on.

The set up was quick and the AV equipment was great – clean and crisp picture and an effective headset mic.  Only thing missing were people – six passengers when I arrived.  At the end, there were about 68 people in the theater – some people came in early to make sure they got a good seat for “Blue Hawaii”.

I did have my first blind attendee at this presentation and she answered a few of my questions.  The talk went well in spite of the low attendance.  One person said he didn’t know about it until someone told him about it. (Later, I wrote a note to Kelly asking to get my presentations “shaded in” like all the other activities of the same type).  Maybe people will bring their friends.

After the talk we took another look at the dining room menu and decided to pass on the sit down dinner.

I started a new book - “Dust to Dust” by Beverly Connor.  The story revolves around Diane Fallon, a forensic scientist who is the head of the Crime Lab in a small town in Georgia.  Diane also is the director of the Archeological Museum in which the Crime Lab is housed.  I already like the Diane Fallon character – she is like Kay Scarpetta on just a bit more caffeine.  The supporting characters are very interesting and the forensics takes major stage in this book.  This could be the start of something.

We spent most of the day reading in the lounge on 15 Aft.

We did have dinner in the Horizon Buffet – did not dress up – stayed in my presentation uniform.  Dinner consisted of salad, spinach in butter sauce, some potato-macadamia fritter, and a wonderful rigatoni in sage cream sauce.  It was good and not hectic.

Tonight is the first Production Show by the Grand Princess Singers and Dancers - “Stardust”.  Even though we have seen this show before, we could not remember any of it except that there were four main singers and two ancillary singers, who mostly worked stage right.  I thought all of the singers were terrific – the dancers moved very well on a small stage shared by the orchestra.  A great show with recognizable songs all performed perfectly. 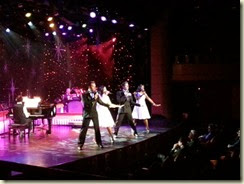 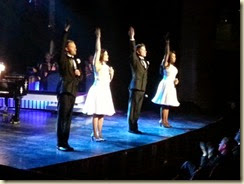 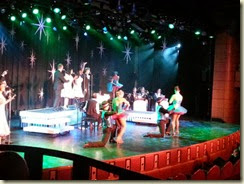 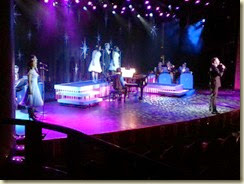 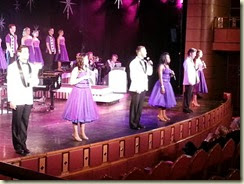 After the show, we once again sprinted to the Vista Lounge only to find that it was full.  We stood in the back for Uber Rossi’s full show.  He was a total hoot tonight with some new material and great interactions with the audience.  His was the longest show we have yet seen on Princess but every moment was funny.

Next stop – the 9 PM show by Brad Stevens in the Crooners Bar.  We got there a bit early and the String Quartet was still playing so we diverted to the Explorers Lounge to hear the party band, “Retrospective”.  A lead female singer plus three guys (who also sing).  They were very good – easy to listen to and great voices.  The lead singers sings with a British accent. 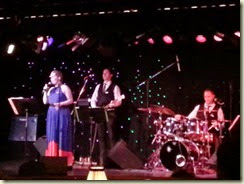 When their set ended, we went back to Brad Stevens, who was offering up mostly classical music tonight (not my favorite but he is good).  Later in the set, we got back into some Broadway and Ragtime and added some comedy by making up lyrics to well known songs (“Doe Re Mi” sung by Homer Simpson – all about beer).

Back to our room to settle down – another sea day tomorrow and my talk (still no highlighting) is once again at the witching hour of 12:45 PM.

The ship is rocking a little – hope it stays this way – there is significant creak so earplugs go in.