A beautiful day in Lahaina, Maui… 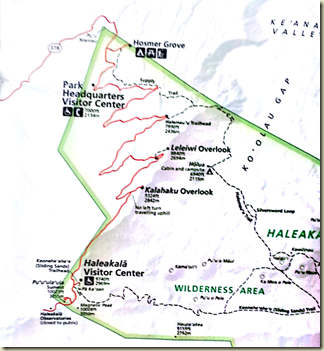 Mini-Local Information.  Maui is the only island where you can see three other Hawaiian Islands (Molokai and Lanai are two of them).  It is also home to the largest extinct volcano in the world, Haleakala.  Lahaina is the most popular resort port on the island.

This is a tender port and tender service starts at 7:00 AM.

We are both on the same tour today –“Haleakala Crater” and we have a 7:00 AM meeting time in the Princess Theater.  This means a 5:45 AM Room Service delivery (another Special K breakfast – today, I also ordered a breakfast muffin (egg plus cheese – hold the ham)).  Breakfast was OK and we got to the Theater on time.

Our tender left right on time and less than 10 minutes later we were at the port at Lahaina.  Our bus was a little late so we huddled in the shade due to the heat.  It is the warmest day of the cruise.

Another full sized bus, driven by the narrating guide - “Uncle Charlie”.  That can’t be legal back in the mainland.  Not only that, but this drive involve a climb of over four miles to the summit of Mt. Haleakala, over roads that are two lanes but not as wide as our bus.  The bus spent most of the time in the middle of the double yellow line and only moved over when a car was coming down from the other direction.  On the plus side, the climb was slow and there wasn’t a scary drop-off at the shoulders of the road. 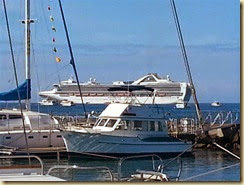 The Grand Princess from Lahaina

Maui is shaped like a head and body with Lahaina located near the nose.  Our trip started down the face (South) toward the body part of the island.  Spectacular views of volcanic peaks highlighted our trip into the countryside (the picture below is rare since it doesn’t have any telephone wires). 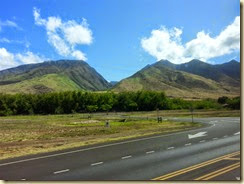 On our way – heading South

As we made our way to the cloud covered Volcano, we passed the only working sugar processing plant on Maui (and perhaps one of the few in the Islands).  There are still sugar cane plantations on Maui as well as the famed potato farms (“Maui Potato Chips”).

About a hour away from the port, we started our climb toward the 10,300 foot summit of Mt. Haleakala.  The terrain was clearly volcanic but it contained a variety of plants that could deal with the hard volcanic soil (tough for roots to penetrate).  The sides of the volcano were also dotted with nice homes (recall that this volcano is extinct). 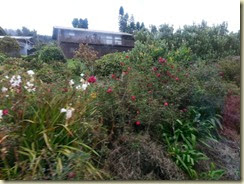 Home on the Hillside

About half way up the mountain, we stopped at the Ranger gate and then the Visitors Center.  Just a gift shop and restrooms.  We were told that it would be chilly up on the mountain but it was still pleasant at this level.  The terrain at the Visitor’s Center was volcanic and interesting – worth a shot. 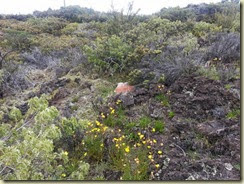 Back in the bus and on our way to the summit, another half hour or so.  As we made our way up we passed through the cloud layer and into clear skies.  The weather conditions at the summit were such that they were ideal with observatories and there were several at the summit.  There was also a fancy radar unit – I’m sure it has a Defense purpose. 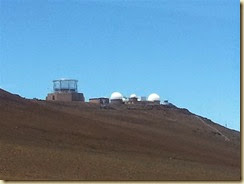 Radar Unit (L) and Observatories at the Summit

The summit contains another visitor’s center – this one has a model of the crater so you can tell what you are looking at.  This crater – according to Uncle Charlie is not a volcanic crater but an “erosion crater”.  It was carved out by rain and wind.  I am not convinced and will check this out later.  If rain did this (and the crater is 3000 feet deep) where did all the soil go (there didn’t seem to be a way out of the crater). 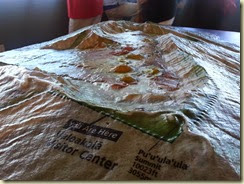 Not really chilly up here until the wind blows across the canyon.  I am still in my t-shirt. 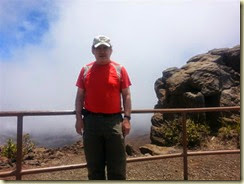 Braving the chilly winds at the Crater

The crater is spectacular – the best way to describe it is to say it looks like Mars without the reddish atmosphere.  The clouds come and go (along with the wind) so it is a constantly changing view.  The iron oxide rich soil combined with the volcanic soil give the crater some eerie color combinations.  The bottom of the crater, some 3000 feet below, is relatively smooth and dotted with small cinder cones.  The edges of the canyon contain jagged volcanic rocks.  Again, its Mars on Earth. 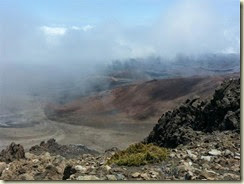 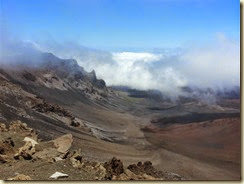 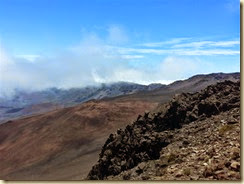 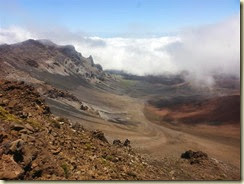 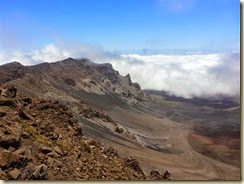 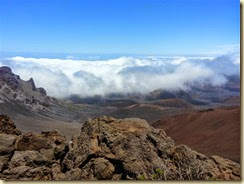 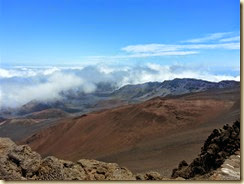 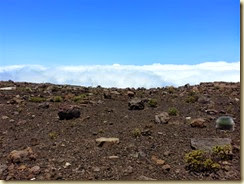 Uncle Charlie was able to get us down the mountain safely.  Our next stop was lunch.  It was advertised as a sandwich and salad stop so our expectations were low.

The restaurant was located in a cute little town called Makawao.  The two had only two major intersecting streets but both of them are lined with shops and restaurants.  Very quaint.  The restaurant – Casanova’s – is located at the intersection of the two streets.  It is an interesting combination of country bar and Italian Restaurant. 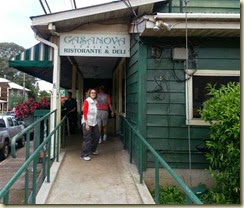 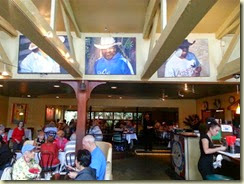 For a place that appears to be in the middle of nowhere, it appears that this restaurant is Zagat rated.  There are also numerous “Best…” awards on the walls.  A little jewel of a restaurant in a tiny town in Maui.

There are two busses here and we can only order off the special menu (six or so items).  The grilled Mahi Mahi looks good to me and Ellen likes the Pasta with Mushrooms except that it has chicken.  After some discussion with Donna our waitress, she said she would check with the chef about losing the chicken.  She said that that might mean we would get our meal last.  In the meantime, we got nice big Diet Cokes (on tap).

Even though there are a hundred meals to serve, the food starts coming out.  Instead of being the last meal made, it turns out that Ellen’s pasta is the first meal to be made.  My mahi mahi is wonderful, with the fresh fish sitting on top of wilted arugula and surrounded by a mountain of baked tomatoes and olives – it is absolutely perfect.  Donna told us that everything is made to order so that means it must be a madhouse back in the kitchen – the food and the presentation reminds me of Francesca’s North back home. 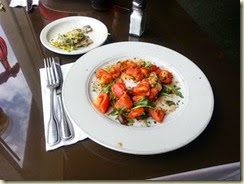 Grilled Mahi Mahi plus a side of Ellen’s Pasta 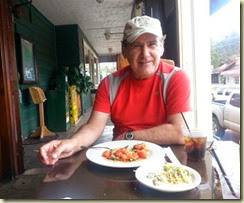 Ellen’s humongous pasta dish is loaded with fresh mushrooms (the freshness of everything was confirmed by Donna) and was delicious.  This might have been the best off ship meal we have had in several years.

Ellen asked if there was any tea – Donna said it was not included but she would get it for us anyway.  She said, if I wanted, she could get me some freshly brewed decaf from their deli.  The drinks came in a few minutes – the coffee came in a to-go cup plus cozy.  The coffee was delicious and hot and grande size.

Our feast was not yet over – Donna asked me if we would like to try some freshly made Focaccia bread – of course, I said, and in a few minutes, piping hot bread plus olive oil and balsamic vinegar appeared.  I forgot to mention, that min-brownies were also part of this meal.  If I can, I’ll put in a Trip Advisor review for Casanova’s when I return.

We tipped Donna for her super service and spent the remaining time in town exploring the stores. 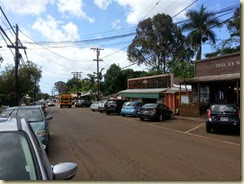 The trip back to Lahaina took about an hour but again it was super scenic and relaxing.  Uncle Charlie was funny and he occasionally broke into song, singing some Hawaiian melodies.  We passed both Lanai (Charlie said it was now owned by Larry Ellison of Oracle – need to check on that). and Molokai.

Our timing was perfect as we arrived at the pier just as a tender was loading up.  Soon we were back on the ship and up on Deck 15 Aft to watch the sail away. 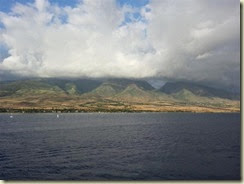 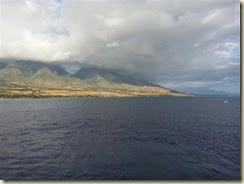 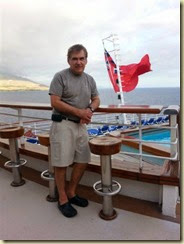 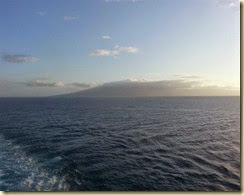 Dinner was in the Michelangelo Dining Room – I had Mahi Mahi again but also Gazpacho Soup.

Didn’t take in any of the entertainment tonight – reading and relaxing was the order of the evening.