A much smoother ride last night…

A cloudy morning at sea… 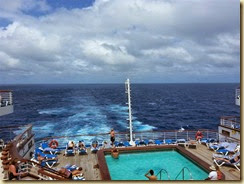 As repetitive as it may sound, we were back up on Deck 15 Aft to read, relax, and accidentally fall asleep.  I spiffed up my presentation for today and just hung out until lunch time.

There was nothing for us in the Horizon Court so we got sandwiches at the International Cafe – tuna for me.  The most bizarre meal to date.

My third talk - “Cold Cases Solved” – a usual winner – drew maybe a few more people than the previous talk (approximately 130).  Again, no highlighting in the Patter – you might say I am employing “stealth technology”.  On the plus side, I did have some nice pre-talk conversations that were very positive.

A change of clothes and back up on Deck 15.  It is nice and warm up there today and the couches are very comfortable.  My afternoon was spent reading “Dust to Dust”.

We had reservations in the Michelangelo Dining Room and this time we kept them – I had the Macadamia crusted Mahi-Mahi and a house salad.  Ellen had the Ravioli in Walnut Cream Sauce.  I don’t think my fish was Mahi and the dinner was just so so.  Ellen liked the Ravioli.

We headed to the Princess Theater to catch Don Bryan and puppets, Noseworthy and Annie.  The theater was not full as I expected it would be.  The show was OK – some chuckles along the way.  The coolest part of the show was how Don worked both puppets at the same time – Noseworthy personally and Annie by remote control (he had to have a helper).  It made for an interesting act.

From there to the Vista Lounge to catch Jeffrey Allen doing his second Elton John Tribute show (not as crowded as we thought it would be).  I had noticed the other night the he did not sound right – he admitted tonight that he was sick and couldn’t hit any high notes.  Because of his voice, he was even more difficult to understand (couldn’t pronounce “Philadelphia” – came out one syllable short).  However, all of this didn’t stop him from performing a great rendition of “Candle in the Wind” with a montage of Marilyn Monroe pictures running in the background.  It worked perfectly. 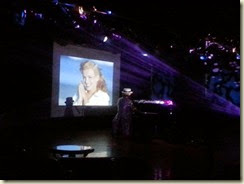 Candle in the Wind

The rest of the evening was spent with Brad Stevens in the Crooners Lounge.  Tonight he did some piano man type songs – still entertaining.

Seas are smooth as we approach the Big Island and Hilo.