A nice warm day in The City…

Had the usual Travelodge breakfast of coffee, packaged sweet rolls and muffins – plus bottled water, which we took with us to use on the ship.  I walked over to the Walgreen’s to return some items and took a picture of some interesting buildings across from the hotel. 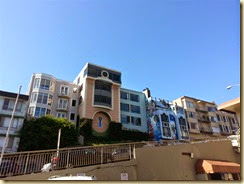 After checking out at 11:00 AM, we pulled our suitcases the 0.6 miles to Pier 35 to board the Grand Princess.  The walk seemed a bit more difficult this time because my suitcase seemed quite heavy.  We did make it eventually after a couple of stops. 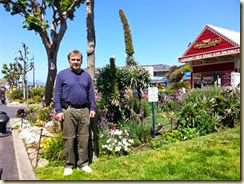 Docked next to the Grand Princess was the Crown Princess, stopped here as part of its California Coastal itinerary. 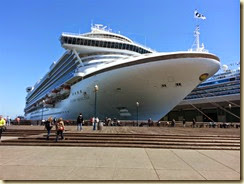 We got our luggage tags and dropped our stuff off with a porter and entered the incredible chaos that was the terminal building.  After speaking to several representatives, we eventually got into a shorter check-in line.  We got our Sea Pass Cards and boarded the ship.

We got into an elevator – manned by a Princess employee – and headed for Deck 12 – Aloha, where our cabin – 12105 – was located.  After several attempts to find it, we were told that it was in the crew area (“behind the door”).  The cabin did not work off Sea Pass but a metal key.  When we got inside, our worst fears were realized. 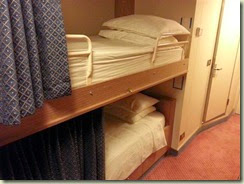 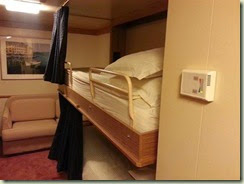 Bunk beds – not the kind of bunk beds we had seen on ships previously (used by the kids) but mini-bunk beds.  The rest of the cabin was OK – it had the biggest sink we had yet seen on a ship (you could do a full load of laundry in that sink).  It has an oversized shower.  There was some storage in the bathroom and loads of storage in the cabin proper – there was a small couch and a single chair.  It did have a phone.

We dropped off our bags and headed for the Horizon Court to have lunch.  I had the salad bar and Tilapia (which was actually Mahi Mahi) – I also had some of the pizza available on the pool deck).  I didn’t eat much of that so we also tried some some pizza at Alfredo’s Pizzeria in the Piazza. I remember it was better last time but it was just the first day.

We visited the Maitre D in Sabatini's to inquire about anytime dining and he said we were set for that.

We attended the Lifeboat drill at 3:30 PM and following that, we met with Lexi – assistant to the Deputy Cruise Director, Kelly Engelen.  Lexi said I had the day off tomorrow but that I would be giving all nine lectures including one on the morning of the Ensenada stop.  I dropped “Christopher Columbus” and added “Identifying the Famous and Infamous” as number 9.  We also asked if anything could be done about our room and she said she would check.

It was chilly on the open deck for the Sail Away so we started there and eventually went inside.  I did get some nice pictures of the ship as it backed out and eventually passed under the Golden Gate Bridge. 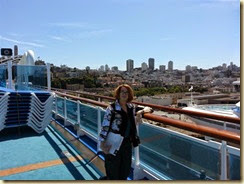 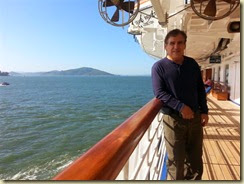 Me on the deck 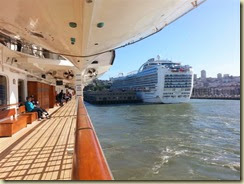 Backing out – Crown Princess along side 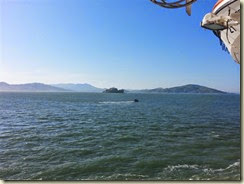 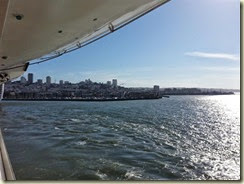 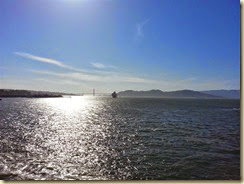 A Ship waiting for Pier 35 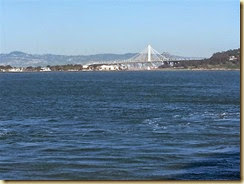 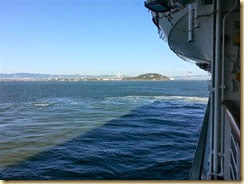 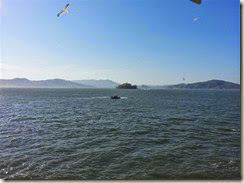 Alcatraz and the Seagulls 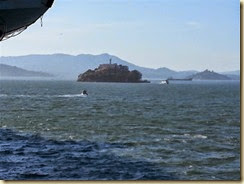 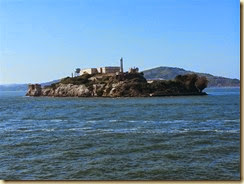 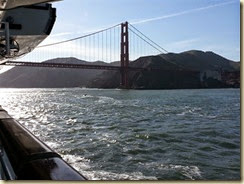 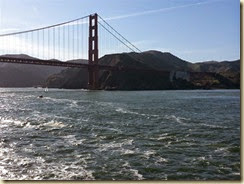 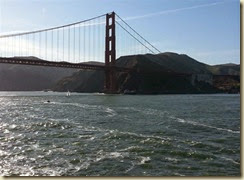 Open Up Your Golden Gate

We had dinner in the Michelangelo Dining Room at 5:45 PM.  Ellen got us Table 46A – a quiet table in the corner away from rushing waiters and flying dishes.  We shared the Fettuccini Alfredo (with Salmon on top).  Before that, we had Spring Rolls (very good), mushroom soup (very good), and a small Cesar Salad.  I had a sundae for dessert.

After dinner, we caught acrobat-comic, Uber Rossi in the Piazza.  He was on our cruise on the Grand Princess in October.  He is totally crazy and you should never sit close to the front with him or you will be part of the act. 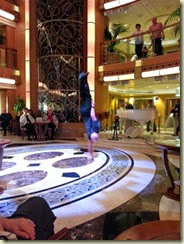 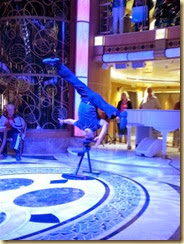 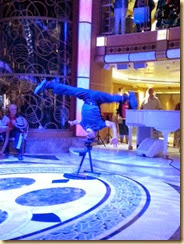 We went to the Welcome Aboard Show at 8:30 PM in the Princess Theater – Cruise Director Gavin Chandler previewed what was going to happen over the next 15 days and entertainment was supplied by comic, Kevin Jordan, who was funny but a bit hard to understand.

We hung out in the Piazza until we could no longer stay up and headed to our room in the sky.  The seas were a big angry and the ship was really moving – it was difficult walking around in our room.

Getting in and out of the lower bunk is an exercise in flexibility and I was probably going to be doing that at least twice during the night.  The best way to describe the lower bunk was a cross between an early MRI machine and a coffin.

Adding to the mix was the serious rock and roll of the ship – felt more at the higher decks.