The sea was very choppy all night and only smoothed out a little bit around 2:30 AM – Didn’t get much sleep but did managed to get in and out of the bunk with minimal bruising.  The cabin was very quiet except for the creaking (due to the chop).  we do have some very important neighbors – the Captain is right across the hall from us.

Got about five hours of sleep.  Good thing I have the day off today.'

We ordered room service over the phone last night and it came a bit early at 6:25 AM (Ellen was going to go to exercise class).  Because of the options for room service, we may not be doing this that often.

After breakfast, we talked to the Administration Officer about our cabin situation and she indicated that were no options available.  We will adapt.

I made reservations for the Michelangelo Dining Room for 5:30 PM.  I requested the same table but no guarantees.

The morning will be spent organizing my talks and blogging the trip (as I am doing right now at 10:42 AM up on Deck 15). 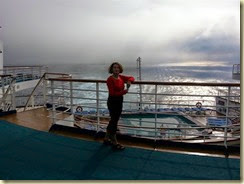 Ellen on a not-so-sunny back deck

So far, the best part of the day was the yummy chocolate donut Ellen procured in the International Cafe.  A real American style donut.  Bigger and better than a Dunkin Donut.

Lunch in the buffet and then back up on Deck 15 Aft – still pretty chilly up here.

The entire afternoon was spent reading on the deck – the weather never improved but the seas quieted down for the rest of the day.  I made good progress on the Pendergast novel - “Two Graves” – a tale about Nazis, Brazil, and some strange characters with a connection to Agent Pendergast.  I will finish the novel tonight.

We went to dinner at 5:30 PM and immediately had to change our table – we could not get 46A and instead were seated at a table right next to a waiter stand.  I asked to be moved and we were given a nice table for two away from the flying dishes.  However, we decided not to stay because of the paucity of menu items.  Next stop was the Horizon Court, where we also found little to eat.  Final stop was Alfredo’s Pizzeria for their Vegetariana Pizza – I put together a green salad in the buffet and brought it down to the Pizzeria since they do not offer anything but pizza.  The meal was good and we got a chance to hear the Hawaiian Duo, Brian and Rowena, sing and dance (in this duo, only Brian sings – Rowena does the hula to some of the numbers) but spends most of her time hugging and kissing the customers. 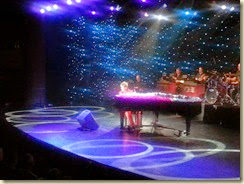 He had the look and mannerisms of Elton John down pretty well and he sounded great on his first song, “This Is Your Song”, but he did something to his voice while shouting up the audience.  From that point, his voice was struggling and I couldn’t understand a word he was saying.  Still entertaining.

From there we sprinted to the Vista Lounge to see ventriloquist Don Bryan (and Noseworthy).  Low key humor but funny nevertheless.

Final stop was the Crooner Bar, where we spent an hour with Piano Man, Brad Stevens.  Very entertaining combination of show tunes, classical stuff, and ragtime.  Might be our go to guy for non-show entertainment.

From there to the cabin.  With little fanfare (no bold and no “Princess Pick” status in the Patter), I am scheduled for 12:45 PM tomorrow.  Could be a cozy audience.

The sea is smoother tonight…hoping it lasts.