Local Information. Cartagena gets it name from the Carthaginians, who called this city “New Cathage” which became Cartagena.  It is best known as the place from which General Hannibal lead his 60,000 men across the Alps on elephants to battle the Romans.  Cartagena is located in the Autonomous Community of the Region of Murcia.

Up early, so I was able to get a picture of the sunrise (and another vessel) from our cabin. 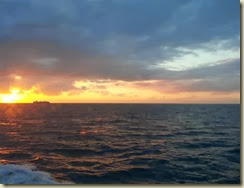 I didn’t see the sail in last time we were here (a few years ago) but the timing was perfect today and the sail in was picturesque.  I captured it in the series below. 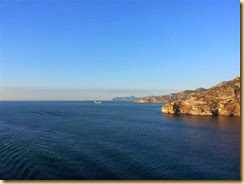 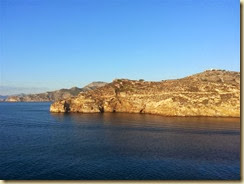 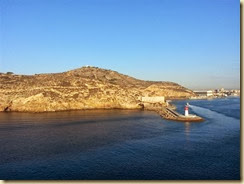 It’s a chilly day in Cartagena today but the sun is out making it seem warmer.

We are not on tour today – we are instead going to get some walking in – there are several big tour ports ahead and we need to rest up for those.

The Equinox is docked right next to the city so it is a mere five minutes walk to the main square. 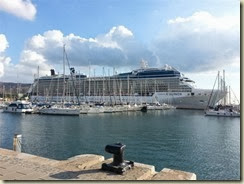 Equinox docked next to the Marina

There used to be a small vintage (war era) submarine displayed on the Marina Walkway – the Peral Submarine.  The sub has been fully restored and is now in the Naval Museum.

Near one of the marina buildings, there is a sculpture of sorts of a diver. 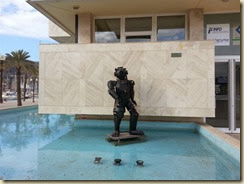 We stopped to get a picture of the Monument to the Heroes of Cavite and Santiago de Cuba – commemorating the Spanish Soldiers who died battling the US in the Philippines during the Spanish American War. 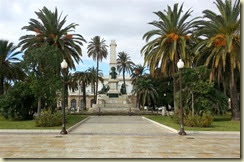 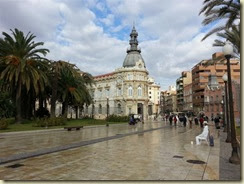 The street name – Calle Mayor – is engraved right there in the street – you can’t miss it. 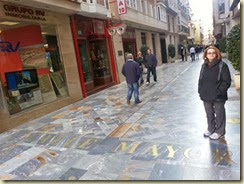 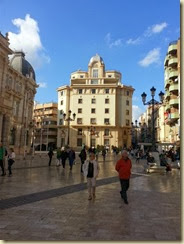 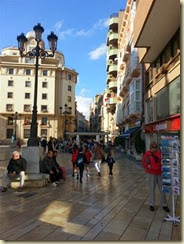 The Main Street of Cartagena

After a nice walk through the town (and a couple of 20 Euro massages), we returned to the ship.  From the open deck, I was able to get some terrific panoramic shots of Cartagena Marina and environs. 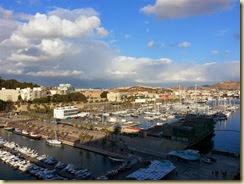 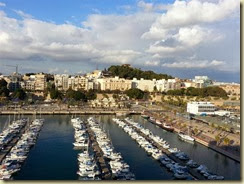 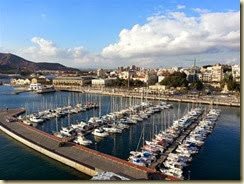 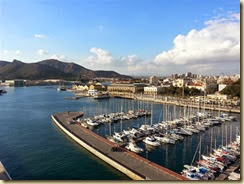 Spent the rest of the afternoon relaxing in the Solarium.

At 5 PM, we went to Cellar Masters to tape a promo with Damian.  The other speakers were there as well:  Carolyn Peterson (Astronomer – I knew Carolyn from an earlier Celebrity Caribbean cruise); the other two speakers were George Kourounis (Storm Chaser and Adventurer on his first cruise ever) and Scott Homler, a Destination Speaker.  Four speakers – that will take some scheduling.  We also heard that there would be a Rabbi on board (presumably to handle the Hanukkah services).

My taping went well – the speakers then met with Damian and Daniel and were told that all the speakers would start off in the Celebrity Theater and then, depending on the turnouts, some presentations might return to Celebrity Central.  Sounds like an interesting plan.

After dinner in the Restaurant, we went to the theater to watch Neil Lockwood perform his Elton John Tribute.  We had seen Neil perform before but the show was entertaining once again.