On our way across the pond…

A cool but nice day at sea.

We noticed another vessel off the starboard side – later the Captain said it was the Celebrity Constellation also traveling to Fort Lauderdale.  Race on… 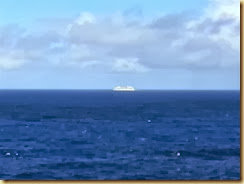 Racing the Constellation to FLL

My second talk this cruise – “Cold Cases Solved” - is at 11:00 AM in the Equinox Theater.  There are quite a few people already in the theater when I arrived at 10:30 AM.  But as it got closer to the start time, more and more people kept coming – not only on the main floor but in the balconies.  When I took the stage, we were at near Full House. I estimated the attendance at over 1000 people based on 1300 capacity.  The largest audience I have ever had. 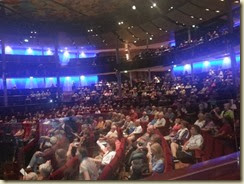 The talk went well – essentially no one left early.  Nice round of applause at the end.  One special day.

After changing clothes, we went to the Ocean View Café for lunch.  The place was packed and we could not find a seat.  It appears that a sizable percentage of the folks attending the talk all arrived at the Ocean View Café at the same time, slamming the place.  With the turnover, we eventually found seats.  That’s impact.

Relaxing and reading completed the afternoon.

After dinner, we took in the lounge entertainers as we had seen the headliner, Brooks Aehron – Pianist, several times on previous cruises. 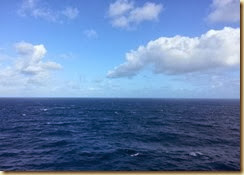 I have the day off today – the Captain is delivering the “How Our Ships Move” program. 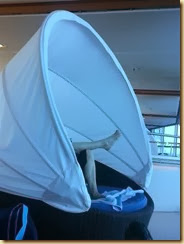 After lunch, we planned to catch the Travis Turpin Matinee at 2:00 PM.  When we got to the theater, I started to feel a little woozy and decided I would go back to the room and lie down.  When Ellen came down after what was a great show, she took my temp – 101.9F.  Felt just like the flu (fever, aches, chills, and queasiness).

Showtime tonight was “Remix” but we stayed in the room. 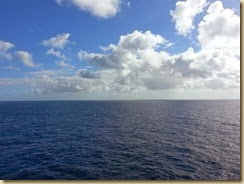 Got some sleep – thought it best to order breakfast from Room Service – scrambled egg and pancakes.  Fever down a bit thanks to acetaminophen.  After giving a lot of thought and assessing my state, I called Daniel and said I would do the presentation.

After a shower and a couple of pills, I headed to the theater.  Instead of mingling with the audience, I sat in the chair waiting for the talk to start. 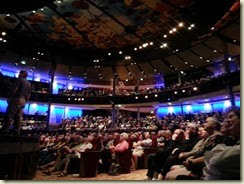 Full house – Mystery of the Romanovs

Although flu wobbly, I got through the presentation – it went well, I think - and leaned against the stage while fielding some Q and A from the audience. 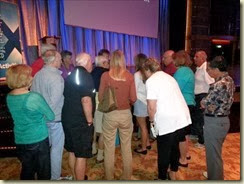 After the talk, I was back in the room to rest.  Still wobbly.  I watched “Man of Steel” on Demand more than once (on mute) and just took it easy.

Had a mild lunch and then back to the room.  Some improvement.

We had dinner in the Ocean View Café – I had the chef make some vegetarian fried rice.

Listened to the Sunrise Trio in the Grand Foyer – they sing with a strong accent but they are easy to listen to.  The drummer seems to be using a box to keep the beat. 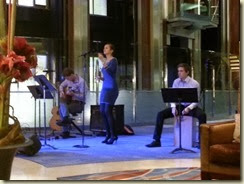 Felt well enough to catch David Lucas for Showtime.  David is a half Asian- half Portuguese- Spanish – all funny juggler. He is part of the Sin City show in Las Vegas.  He puts on a very good show.  He finished his show by showing old TV clips of his uncles on the Ed Sullivan Show in the fifties.

Still trying to get better.

Still not well and I’m running out of acetaminophens.

Ordered breakfast delivered again – the scrambled eggs and pancakes seem to be a good choice. 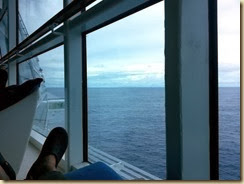 I am on at 11:00 AM today – “Search for the Unknown Titanic Child”.  Again, the theater appears to be full (maybe a few empty seats here and there). I feel well enough to visit with some of the audience members.  Damian, jokingly – I think – said that maybe he should alert the Dining Room for a potential slam because the Celebrity Brunch is running this morning through 1:00 PM.  If a large number of passengers decide to go the Bruch following the talk, there might be a problem. 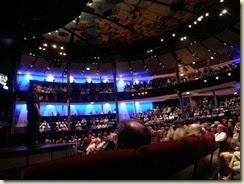 The talk went very well – this is usually a well received presentation.

We did not go to the Brunch – went to the buffet instead.  I wonder if it was slammed – a strong possibility.

Dinner was in the Ocean View as well.  They are probably wondering what has happened to us in the Dining Room.

The Headliner tonight is our friend, Jayne Curry.  Jayne was in great voice tonight and her banter with the audience is spot on. 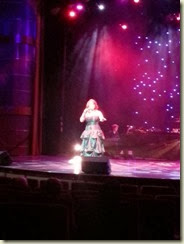 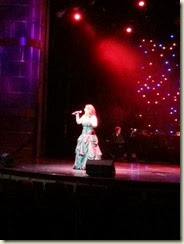 Jayne Curry – bringing down the house

Spent most of the day in the Solarium trying to rest. 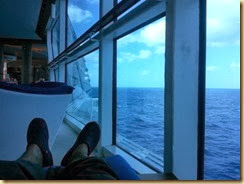 Chilling in the Solarium

This ship has scheduled a number of matinee performances.  Today’s afternoon show features both David Lucas and Jayne Curry.  They were both great – David showed pictures of his father on the Ed Sullivan Show doing some incredible acrobatic stunts.  Jayne stopped the show with her cover of Whitney Houston’s “I Will Always Love You”.  She might have been better than the original. 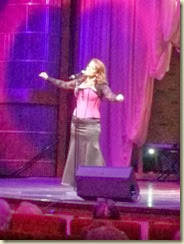 Jayne Curry – I Will Always Love You

After dinner in the Ocean View – some kind of mild Asian Dish, we went to the Theater for the Production Show – Limelight.  It was a tribute to Broadway Shows and although some of the numbers were apocryphal, the show overall was great.  I liked the segment from “Mama Mia” (below). 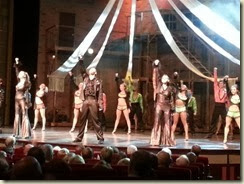 Back in the room after the show – my fever is mostly gone and I am feeling much better.  Good thing -  only two caplets left.

Finally, a beautiful, non-sick day at sea – as we get closer to Florida, the weather is improving (much warmer).

Whatever virus decided to attack me is gone (and no one washes his hands or uses sanitizers like I do) and I am almost back to feeling like myself.

I am back in my routine – breakfast in the Ocean View Café (my standard waffle breakfast).

My seventh talk is scheduled today at 10:30 AM – “DNA Photofitting – Genetic Eyewitness”.  It is another capacity crowd.  When I asked if anybody was familiar with the Derrick Todd Lee – Baton Rouge Serial Killer Case – two women along the side indicated that they were from Baton Rouge and remember the whole story.  When I finished with that part of the presentation, I asked them how well I had presented the story and they said it was right on the button.  Good feedback.

The best part about being well again is that I could get back into the crowd before the presentation.  This time I went to the left side of the theater (from the stage), which I hadn’t visited the entire cruise.  What a fun thing – the pre-talk schmoozing.

We had lunch out on the back deck – something we couldn’t do until the temperatures got comfortable. 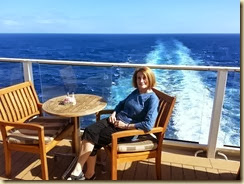 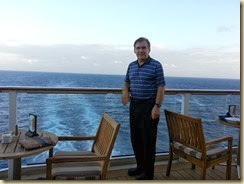 On the Back Deck

We ventured up to the Lawn Club on Deck 15.  The grass looked nice and the sun was bright.  We met some passengers who said they spent most of their time up on the Lawn Deck – a quiet, scenic spot. 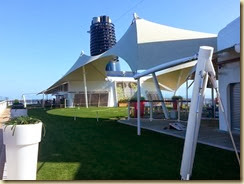 We still like our spots in the Solarium so that’s where we spent the rest of the day.  One nice thing about the Solarium is its proximity to the Spa.  Being next door to the Spa means knowing when the Spa staff are giving complimentary mini-massages.  They are five minutes of pure relaxation.

Showtime tonight featured Don Gavin – “Godfather of Boston Comedy”.  It was very nice to have a comedian tonight and he was very funny.

After the show, we went to the Ensemble Lounge and listed to Le Chic Duo – they sound like they are from France.  They sing mostly soft rock and are very easy to listen to (content and volume).  I even got them to smile for the camera. 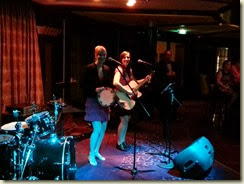 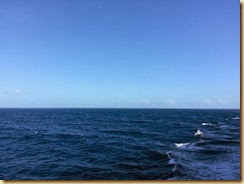 A final, beautiful day at sea – warm and sunny.

I got up early and had breakfast in the Ocean View Café.  Bonus:  A spectacular sunrise in the Atlantic Ocean. 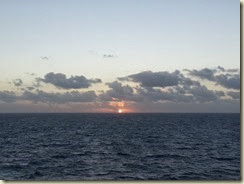 My eight and final talk – “Identifying the Famous and Infamous” is also a full house – the seventh capacity crowd in a row.  Without a doubt, this has been the most successful cruise (in terms of attendance and feedback) to date.  This will be hard to beat.

For the first time this cruise, it was warm enough to sit out on the open deck.  We literally spent hours out there reading and just watching the waves. 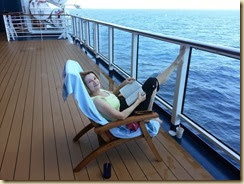 I did finish some e-novels during the cruise – “Running Blind” - A Jack Reacher book and “Blasphemy” by Preston and Childs.  One thing missing from this cruise – naps in the Solarium or Open Deck.  Maybe next time.

Farewell Showtime brought back Jayne Curry for the third time – she certainly got some terrific face time with the audience, who loved her. 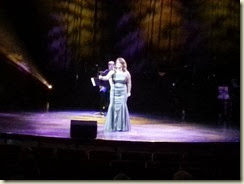 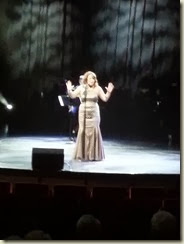 And, of course, no farewell show would be complete without “We Will Rock You” 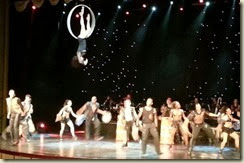 Packing didn’t take long and our bags are out in the hall.

Tomorrow, we will be in Fort Lauderdale.