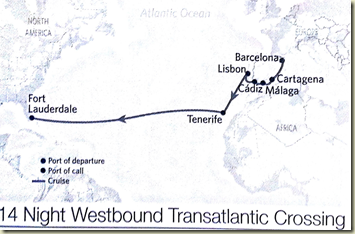 Midpoint of our back to back cruises.

It was too cold to make the walk to Barcelona, and we had already spent several days there prior to our first cruise, so we stayed on the ship and went through the immigration turnaround process.  This gave us chance to be first in line at the Ocean View Café for our second Embarkation Lunch.

We were able to get a very nice picture of Barcelona from the ship. 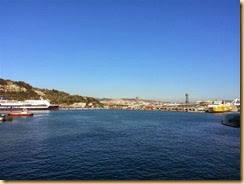 Barcelona from the Equinox

The rest of the day was spent in the Solarium – the sail away was exactly the same as the first one, with views of the oil storage tanks predominating the view.

We were able to get the same table we had on Cruise number 1 – table for two in the back by the window.  Awesome.

After dinner, we went to the Ensemble Lounge to catch the lounge act, which in this case was a quartet from Brazil led by singer Elaine Abras.  She is very good and the volume is low enough to spend extended times in the lounge. The Welcome Aboard show featured the Celebrity Singers and Dancers as well as Steve Cauette.  Steve kind of gave away his MO by warning the audience not to come late for his full show later in the cruise.  I think that will reduce the impact of his ad lib type of program. 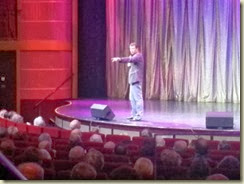 The Singers and Dancers did another good job previewing their talent.  I think one of the male singers has been replaced. 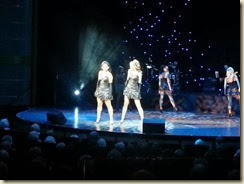 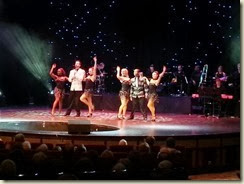 After the show, we went back to the Ensemble Lounge.  This time, we listed to the Sunrise Trio, whose accents suggest an Eastern European origin.  One member of the group plays a box that he also uses as a seat – most unusual.  Their sound is soft rock and standards.  They are easy to listen to. 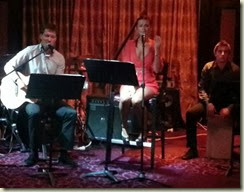