Local Information. Tenerife is the largest of the Canary islands (named after dogs not Canaries).  The land mass encompasses 800 square miles and is shaped like a triangle.  The Capital is Santa Cruz de Tenerife (pop 220,000).  The Anaga Mountains are seen behind the city of Santa Cruz, the islands’ capital.  The Volcano Teide at 12,198 ft  is the highest point in Spain.

It is warm outside…

We have an early tour today at 8:50 AM – “Northern Island Panoramic Tour (Cesar)”.  We need a quiet, scenic, mostly bus type tour after all of the heavy-duty touring at the previous ports.  We are up so early, that we get some great predawn pictures of the capital city, Santa Cruz, from the open decks. 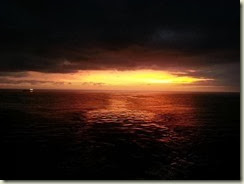 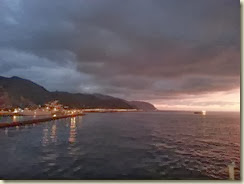 Up on the pool deck, I was able to get a picture of another cruise ship approaching the city. 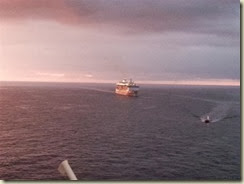 We were both in our Cruise Escort gear as the ship maneuvered around the bay and approached the pier. 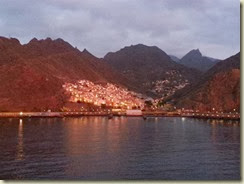 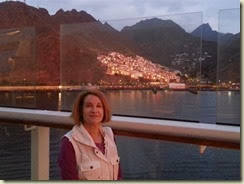 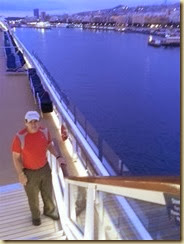 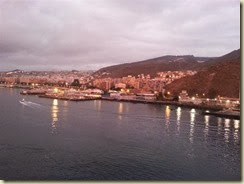 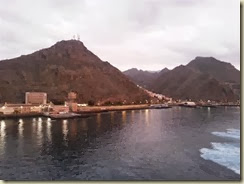 The Anaga Mountains – Volcanic No Doubt

We gather with our groups in the theater and soon we are off on our tours.  Ellen has her “Economy Plus” seat at the rear of the bus. 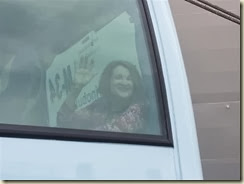 Ellen on her Bus

The bus route will take us to two scenic overlooks – each of these has a restaurant associated with the viewpoint, but today being a Sunday, the eateries are closed.  The pictures below were taken from the Mirador Humboldt. The Humboldt Viewpoint looks over the Orotava Valley, which is known for its ubiquitous banana plantations. 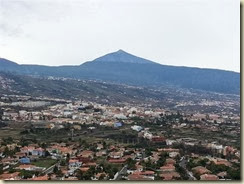 Volcano Teide in the Distance

The green areas in the pictures below of the valley are those banana plantations.  I am thinking that they will never run out stuff to make banana splits. 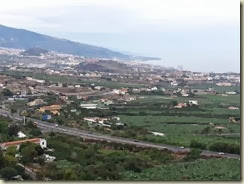 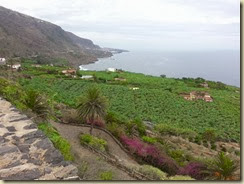 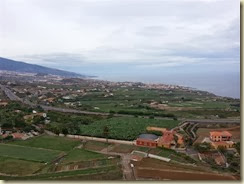 The next viewpoint is Mirador San Pedro, which afforded nice views of the Atlantic as well as the rest of the island as the coastline curves around. 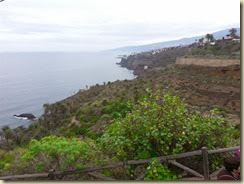 Our final stop is the resort town of Puerto de la Cruz, located in the Orotava Valley.  This town, population approximately 30,000, was the first holiday resort in the Canary Islands.  Today, the place reminded me of a mini-Cannes, complete with beaches and plenty of hotels and shops.  There was a nice pedestrian walkway along the beach.  Wish we could have spent more time there. 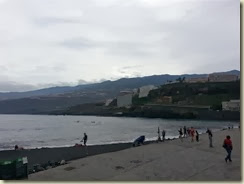 We did find a fellow passenger to take a picture of us near the beach.  Not bad. 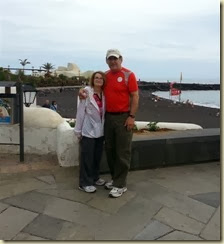 Photographic Evidence – We were there

We did get a chance to walk along the boardwalk for a few minutes – even found some facilities.  The shops were nice and open – must have know some ship folks would be coming by.  My bus was scheduled to leave first – I was able to get an interesting picture of Ellen accessing the free WiFi at McDonalds (Mickey D has a far reach) in the center of town. 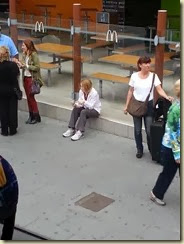 We got back early enough to grab lunch and head back out to get a better look at Santa Cruz.  The last time we were here in 2009, we took a tour that took us to an historic village and we saw little of the capital city.

The port and/or ship provided a shuttle to the port entrance so we hopped on and soon we were along the harbor front.  The weather was pleasant and perfect for walking.  Santa Cruz in located on hills so we did the up and down the hills thing along several streets.  The shops were modern, the streets were clean, and the people appeared friendly.  Most of the streets were traffic free – pedestrians only.  If we get back here in the future, we will do more exploring of this interesting city. 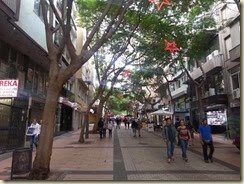 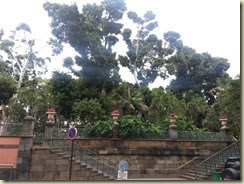 We started to walk back toward the harbor to find our bus drop.  On the way we encountered a most interesting wall on one of the buildings – a living wall complete with flowers and plants.  It was fantastic. 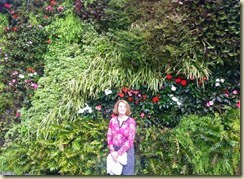 The Wall is Alive

One of the more impressive sites near the harbor is the Plaza de Espana, complete with an artificial lake (not very full of water today) and the Monumento a los Caídos (a tribute to the casualties in the Spanish Civil War). 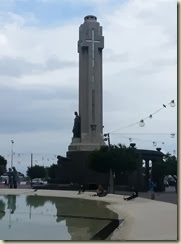 We took a bridge from the town to the bus stop – being up a bit allowed me get a nice (if hazy) picture of the Celebrity Equinox and two companion cruisers docked at the pier. 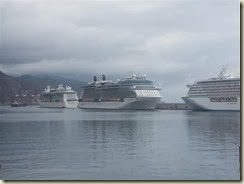 After dinner in the Dining Room, we went to the Theater to catch another old friend, Travis Turpin, doing impressions and singing.  He came into the audience as “Elvis” to spend some time with a passenger sitting in the row in front of us.  I couldn’t resist take a flash photo of Travis.  Can’t get any closer than that.  His show was updated a bit from the last time we saw him and he included the cool clip of his family accompanying him on one song.  A very entertaining show. 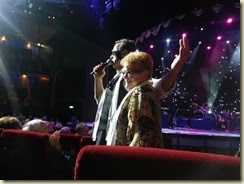 Travis Turpin – Thank you very much…

After the show, we caught some music in the lounges before heading off to Celebrity Central to catch the 11:00 PM “Sin City Comedy Show”.  The show, which runs in Las Vegas at Planet Hollywood was hosted by Jason Duty (yes, he made fun of his name as often as he could).  The show also had a “Burlesque Dancer” and a headliner comic, Greg Vaccariello.  He was a hoot, mixing it up with the audience and doing some nice adlibbing.

A late night and a long day but a great day.