Montevideo sits on the shore of the Rio de la Plata and has a population of about 1.5 million (half of all of the people in Uruguay live in Montevideo. You can walk off the ship and be in the city center in a few minutes.  Montevideo is a a commercial port and does not boast a spectacular harbor.  It does have a building – shaped like a sail - which is similar to buildings in Dubai and Haifa (center of picture below).

After a tour drought, we both got on the same tour – “City Tour, Soccer Museum, and Legislative Palace”. The tour wasn’t too early so we were able to get a decent breakfast before heading to the Provence Dining Room to meet our tour.

We were on the same bus but I was doing the evaluation. The tour took us through the city for a stop at Plaza Independencia (Independence Plaza) at the end of Avenida 18 de Julio for pictures.

From there, we stopped at Prada Park – a very scenic greenspace in the city.

Prada Park has a remarkable sculpture of a wagon being pulled by horses.  It looks like the wagon is coming out of the a lake.  Fantastic.

As the tour made its way to the next stop, the guide pointed out the World Trade Center (there are some 40 WTCs around the world) with its twin towers.  A sobering moment. 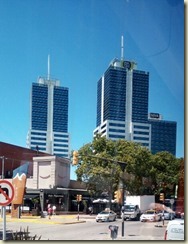 Montevideo is a scenic city as evidence by the large fountain we encountered.

The Soccer Museum – our next stop - was located adjacent to the stadium and had memorabilia from the city’s soccer (they call it football here) history. 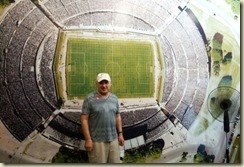 The Museum was selling a lot of team wear but the caps were small and funky so no sale there.

Next up was the magnificent Legislative Palace, a building made completely from marble and granite.

We were only allowed in the foyer so this visit was a little light.

We made a vendor shopping stopping at Ordonez Park and Ellen was able to buy a very nice leather purse.

We passed by the Holocaust Memorial and the Hotel area.

The coast is very scenic with the grassy area featuring statues and memorials.  Even though it was a warm day, there were quite a few people out at the beach. 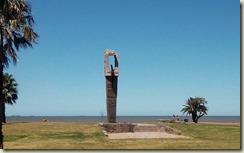 Near the pier, we noted a number of interesting monuments – there was also a lot of construction going on.

We got back just a little after lunch so we got something to eat. The weather was perfect.

It was too windy to be out on the open deck so we spent the afternoon in the Lotus Pool lounge area. We also got another massage demo. Those minutes are starting to add up.

The wind died down and we spent a little time on the open deck.

I was able to get very nice shots of the sunset.

It was Italian night in the Dining Rooms – tonight we ate in the fixed seating Provence Dining Room. I had a double Cesar Salad, Penne Arabbiata and the Veggie Entre (goat cheese and a lot of other items). Cheesecake for dessert.  Pretty good.

Noodles Levenstein has been on the ship since Trinidad and he reappeared for his second show complete with new beard (now that’s a long time to be on the ship). His show was funny even though the jokes were familiar.

We did a little packing and will finish tomorrow.

The sail away was awesome.

We didn’t get our passports delivered to our room so we picked them up at Passenger Services – I also got my Seaman’s Book (which had no notations or stamps).

We are anxiously awaiting the din from the scheduled Crew Party tonight.