It has been four and half years since I was last on a Celebrity Cruise (Europe and Transatlantic November 2013 – at least I went out with a bang with audiences that filled the theater). Now we are back on Celebrity and on the only Solstice Class ship we’ve not sailed on – Celebrity Eclipse. We are also going to spend a couple of days in Miami before the cruise.

We once again have an early flight – UAL1738 at 7:45 AM – so we called for a cab at the usual 6 AM time. He came on time and the early morning ride to the airport was very quick (fast driving and no traffic). We do not have status on this flight so we are not checking bags – we packed very light and are going to use the overheads. I still had premier status so, at least,, I will be boarding in Group 2, increasing my chances of getting an bin for our bags.

I went through Pre-Check quickly but Ellen was the proud recipient of a random pat down. We are at gate C17 so we wheeled ourselves over to Concourse C. We were there with about a 15 minute cushion until boarding. The plane, a B737-800, was there and we boarding right on time at 7:10 AM. I got both of our bags into a big – side by side – and put my computer bag (also a different bag than usual) under the seat in front of me (it barely fit). We had just flown on a United 737-800 but this jet was very cramped – my knees were tight against the seat back in front. We are across the aisle in 31C and D.

My seatmate would not head the “airplane mode on” instructions and so as we taxied I reminded him and he “thanked” me for telling him. I think he would have texted and emailed the whole way. Fortunately and unfortunately, he made a comment to his seat mate and the two of them talked the whole flight without stopping – amazing.  Ain’t flying grand?

The flight was very smooth and we had our usual lunch of bagels, lox, and cream cheese. United has very good coffee and their orange juice is good. 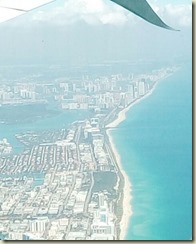 The flight landed about 20 minutes early but we had a gate and our bags so we went outside the terminal to catch our free airport shuttle to the Hyatt Place Airport West Doral. The prices in Miami Beach were sky high due to impending Spring Break (and who wants to be there during Spring Break) so we opted for a hotel near the airport.

Our shuttle arrived as promised in about 30 minutes and it was just a short ride to the hotel. The hotel is relatively new and in an area loaded with shops and restaurants (so we were told when we checked in).

Our room, 502, is a great room – it looks like a suite with a separate, large sectional couch opposite the TV. It also has a microwave, fridge, wet bar area, and work desk. There is no bathtub but the shower is enormous. The bed is huge and the room has a large window overlooking the parking lot and the main street.

We originally thought about going to an early dinner/late lunch at Zak’s Bakery and Deli but after resting a little while, it was too late to go there.

Instead, we decided to go Wynwood, an art and cultural neighborhood. I called an Uber and the fare was $18.01 – the ride took us through some dodgy areas of Miami. The driver told us that Wynwood was one of the worst parts of town until it underwent a transformation into an area of art galleries, restaurants, and shops. It is still an oasis in the middle of a scary desert.

Our driver dropped us off at the Wynwood Walls.

The best way to describe this is a park with painted walls – the walls have been turned into works of art by various artists and the subject matter varies widely (examples are below).

Ellen and a beautiful Cityscape

It was a perfect day to wander through the exhibits. I should note that there was security everywhere and Miami-Dade Police Cars patrolling. The park was full of visitors and the streets were teeming with people visiting the area. We stopped in at a couple of galleries – one that claimed to have items from the Taj Mahal and another fantastic gallery full of amazing art pieces. No one seemed to mind people taking pictures of the art. 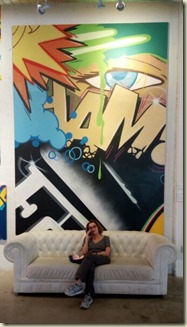 Communicating with Home under Great Art

After Wynwood Walls, we walked a few streets in the neighborhood.  Lots of traffic and not a lot of respect for pedestrians.  There were words of wisdom carved into the sidewalk – one in particular caught my eye.

We looked at some of the restaurants as possible dinner places but they were $$$ and everything was a la carte. It was warm so we stopped in one of the restaurants and called an Uber – this time the fare was $28 and it was an Uber Pool car. The ride back was long and in traffic – fortunately, our Uber mate was sort of on the way. The driver was an ex-Chicago college student, who gave us a non-stop narrative on Miami, the police, and bad drivers (amen to that last one).

I had looked up markets earlier and I knew there was a Fresh Market near the Hyatt. The driver said it would be no problem to drop us there – he also said the market was in a great new shopping and eating area called City Place.

He was right. City Place was full of new restaurants and shops – it was only about three or four blocks long but sported all kinds of restaurants. We settled on a Mediterranean Restaurant for dinner – Ellen’s Salmon was good but my falafel plate was just Ok as was my glass of imported Spanish beer. I also ordered a salad, which, after we got the dressings issue resolved, was pretty good.  Not planning a return trip to this restaurant should be stay here in the future.

We stopped at the Market and bought some tuna salad, a roll, and a six-pack of Dasani water. We were set for tomorrow.

We just rested the remainder of the evening – the room was quiet and we were hoping it would stay that way.