No tours today again – a clean sweep for Rio.

In the morning, we took the trolley to the City Center to see what was happening with Carnival. This time, the train did have conductors who came through and checked tickets (most people scanned their prepaid cards). I showed him my drivers license and he said OK. Free for anyone over 60. We got off the train at Candelaria and saw a whole line of floats that were slowly being moved to today’s parade.

After getting some great pictures of the floats, we walked toward the historic Church of Candelaria,

a massive structure which began life as a small Catholic chapel in 1609 (in thanks for surviving a shipwreck).  The current structure was begun in 1775 and is still being worked on today.

Near the church, on one blocked off street, we encountered a large crowd of revelers.

Ellen and the Revelers

Not knowing the temperament of the crowd and clearly standing out, we got back on the trolley and, instead of going back to the pier, we went to the end of the line, which was the Santa Dumas Regional Airport. At the airport, everyone got off – the train was cleared and a new destination lit up the train’s sign and now this same train was heading back in the other direction.

We still had 160 BRL to spend so we negotiated prices and picked up some local trinkets and some nice t-shirts. Any BRL remaining went toward Cokes – we really wanted some cokes. We spent exactly what we had.

From the upper deck of the ship, we could see the difficult process of moving the floats (and why the streets need to be blocked off).

The Island Princess also got into the Carnival spirit – all decorated with streamers and other theme items.  Before dinner, the dancers came out and delivered their version of the Samba.

Music Provided by the Zinger Quartet

Dinner tonight was in the Bordeaux Dining Room – we both had pan Fried Orange Roughy in a very tasty sauce along with a baked potato – very good.

Very scenic sail away – views of Sugarloaf and Copacabana Beach. I had to run out of the dining room to get pictures as the sail away was during dinner. 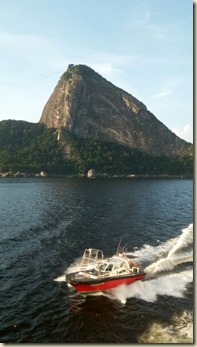 Sugarloaf and our Pilot

Later on, it was “Magic Moment” time in the waters off Brazil.

Showtime tonight featured David Mendelsohn, a Guitarist/Vocalist and his “Rock and Roll Soul Review”, which featured songs from the 50s, 60s, and 70s. He was pleasant and entertaining.

Three very interesting days in Rio de Janeiro.  The next time we come here, we won’t be coming during Carnival.