A rainy, dreary day in the Chicago Area.  The forecast was for thunderstorms but downgraded to rain showers.  We are scheduled on AA1657 – ORD to LAX – then connecting on AA209 – LAX to SFO.  The first flight leaves at 12:20 PM so we call for our cab to pick us up at 10:15 AM.  We are in our new place in Wheeling and not sure how long the trip to O’Hare will take.

The cab is right on time – calls us so we can meet him in front of the building.  It’s a new process.

Check in was quick – security was quick (except for the “obligatory convertible cargo pants pat down” – when did zippers become a weapon?), and now we are at Gate H15 waiting to board.  The aircraft is here. 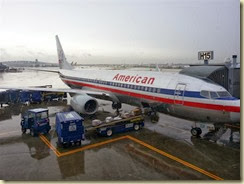 Takeoff was right on time but the pre-boarding announcement was very foreboding ; “The service carts won’t be deployed for the first hour and a half of the flight”.  Never heard that in all of my flying experience – only one reason – chop city.  That’s exactly what happened – the seat belt sign was lit for 4 hours and 30 minutes of the 4 hours and 45 minutes of the flight – the chop was moderate but continuous as the plane bucked winds and cloud top turbulence. 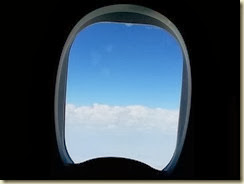 Over the Clouds tops – No Stop to the Chop

One of the highlights of the flight was the flyover of the Grand Canyon – we don’t get to see this very often.  Unfortunately with all the airlines going to the 3X3 seating arrangements and my wanting an aisle, all I could do was shoot the Grand Canyon through the window and past the noses of the other people in the row. 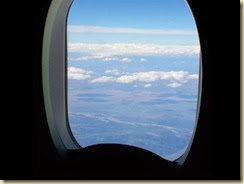 The Grand Canyon (shot from 14C)

I asked the pilot about the chop as we left the plane and he said it was due to “Santa Ana Winds”.  Well, that doesn’t explain the chop over the Midwest and Arizona (maybe thermals).  And Santa Ana winds are ground level winds due to compression of airflow down mountain sides.  I think the bumpy ride was due to unstable air caused by pressure differences and cross winds – lots of nasty weather in the Midwest during our flight.  The pilot didn’t seem to be trying to find smooth air as they used to in the past.  Perhaps, there wasn’t any. 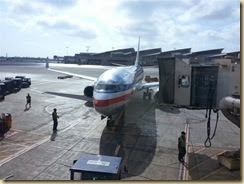 we took off about 45 minutes late and that was also a very choppy (and thankfully, short) flight.  A very nice route – the plan was over the Pacific hugging the coastline.  When we touched down, I could see some of the displaced rocks where the Asiana jet crash landed a few months ago – sad.

Every time we come to SFO we marvel at how nice this renovated airport is.  Our bags were one of the first to come off the carousel.  I called Airport Express and they were at the pickup point (just a few steps away) in five minutes.  The price on the internet was $17/person but the driver quoted us $18/person.  It was just the two of us until he got a call to pick up two other people.  He dropped them off first (not at a hotel like Airport Express is supposed to do but at their apartment) – counting traffic and the new route, it took us about an hour to get to the Travelodge in Fisherman’s Wharf.  Note to Airport Express:  Replace the shocks.

Summing up the Travelodge is simple – expensive, old, no elevator, damaged walls, out of code wiring, semi-functional TV, micro-atmosphere (read “smelly”), semi-clean, tiny breakfast option.  Plus side:  Fisherman’s Wharf location.  We were in 319, the highest level at the end – forgot to include exercise facilities – lugging your bags to room 319. 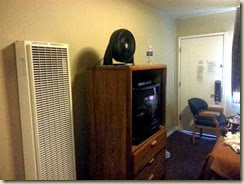 It was warm – 68F – so we headed out to get something to eat.  The main drag of the Wharf was just two blocks away so we checked out several restaurants.  All of the eateries are pricey but we were looking for one that didn’t have the overwhelming sea food smell.  We ended up at an Applebee’s (we were hungry).  The restaurant had a good view and the food was so-so. 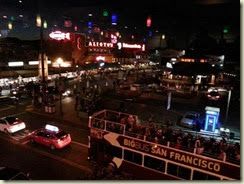 The highlight of the evening was getting a chocolate scone at Boudin.

Back to our palatial room and an early night – tired from the long day of traveling.  A room fan will supply moving air and earplugs will eliminate street and other noise.  Hoping for a decent night’s sleep.