The Constellation has returned to Amsterdam

Got up at our wake up call and had a quick breakfast in the Ocean View Café.  Most everything was available even though it was disembarkation day.  Even better – it wasn’t that crowded so we could relax and enjoy the breakfast.

We assembled in the Theater for our 7:30 AM exit and soon we were going through Passport Control.  In Amsterdam, if you are on a Celebrity Airport Transfer, you do not have to pick up your bags in the terminal.  Your bags are loaded onto your bus and you are reunited with your luggage at the airport – a great system.

The bus ride to Schipol International Airport took about 30 minutes.  We got our bags and headed for the KLM Terminal.  The self serve kiosks were not able to scan our passports (the same story as at O’Hare) so we found a roaming KLM agent (in KLM royal blue) who said we had checked in; she used the kiosk to print out our boarding passes.

We checked our luggage using a very hi-tech, automated system (installed since the last time we were here).  You scan your boarding pass and the terminal prints out luggage tags.  After tagging your bag, you place it on a scale in a capsule type cabinet.  Once weighed, a wall comes down and when it goes up, your bag is gone. Hopefully, on its way to your plane.

Our flight is scheduled for 12:40 PM so we have a few hours to spend at the Airport. Schipol has free Wi-Fi but the connection is limited to 30 minutes.  We each used our free sessions but it was enough to get caught up.

At this airport, there is no central security check – each gate has its own scanners and metal detectors. Once you enter the gate area, I am not sure you can leave so we stayed in the common area until boarding time.

Schipol Airport is a great airport but it has essentially no power plugs in the waiting areas.  They have very nice seats with banks of power plugs but they are not connected to a central power source.  Following the approach of one passenger, we plugged into the only source of power – a plug located on the portable emergency fire system.  This allowed us to charge up on personal electronic devices prior to flight time.

We ate lunch and bought the obligatory Coke Light (a bargain in Amsterdam at only 1.8 Euros).  Rounding out the lunch were all natural chips made from special potatoes (picked seasonally for chips – what?)

KLM announced a departure delay and gate change for our flight.  The delay was less than an hour and the gate was pretty close.

We eventually went to the gate and through security (I did get my usual pat down).  The good thing was that the 747-400 scheduled for KLM611 was at the gate and getting all set up for its flight to Chicago. 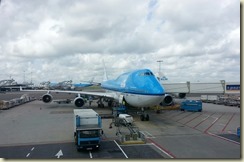 On this flight, we also have “Extra Comfort Seats” (9A and 9B) so we board with the Elite Passengers.  The seats are bulkhead so there is plenty of leg room and I can fit in the window seat.  The plane sits three across on the outside so Ellen is in the middle.  A passenger did show up to claim her aisle seat.

The plane took off pretty much at the new time.  Our pilot, who looks exactly like I think a Dutch pilot should look like – 6ft 3 and blond – apparently does not believe in the “Seat Belt” sign.  Even though the flight was pretty bumpy most of the way, the sign was off until our approach to Chicago.  You had to play a game of “guess when the bumps are coming” in order to rush to the washrooms. 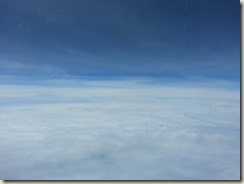 Over the North Sea (30 minutes in the air) 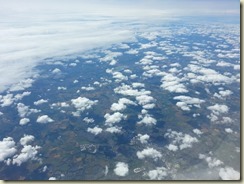 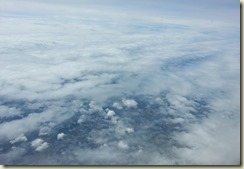 The food on the flight was pretty good. What I really liked was the freshly warmed rolls that were passed out with meals. KLM does not charge for beverages so I had the attendant make me a White Russian – he had not heard of it but he did a good job based on my instructions.

The plane ran into serious chop off the coast of Greenland – the seat belt light was still off.  The skies looked pretty calm so the chop must have been due to crosswinds. 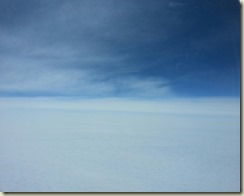 Off the Coast of Greenland – in the Choppy Skies

The cloud cover persisted until we passed over over the coast of Newfoundland. 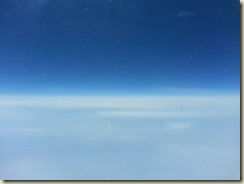 When the clouds broke, I got a very interesting picture of the Sun reflecting off the ice in the waters off the coast – visible even at 39,000 feet. 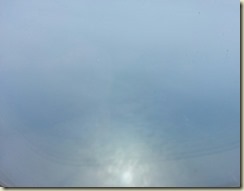 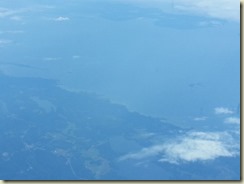 The Shore of Lake Huron 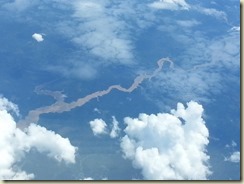 Because the Midwest was under a cloud layer, I couldn’t see anything on approach to O’Hare. 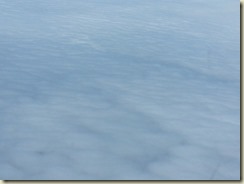 On Approach to O’Hare

Once through the clouds, the approach was smooth and the landing was so soft, I couldn’t feel the wheels touch down.  Our pilot, Thor, did a great job.

It took a while but our bags actually did arrive on our plane.  They had food sniffing dogs in the baggage area – looking for agricultural products.

Immigration at O’Hare had instituted a new system since our last trip through here.  They now have a self serve system, whereby you scan your passport, have your picture taken by a low resolution camera, followed by the terminal printing out a document with an almost unrecognizable picture.  You take this document to an Immigration Agent to proceed to the final checkout.  Because of a limited number of agents and no clear direction where to queue up, the lines were long and the tempers of the passengers short.

I liked the old system where you just got in one long line, showed your passport, got your “Welcome Back” greeting from the agent, turned in your Immigration Card, and re-entered the USA.  This new system is a step backwards despite the hi-tech gloss.  Maybe it just needs to be tweaked.

It was a great cruise but it is always nice to get home.