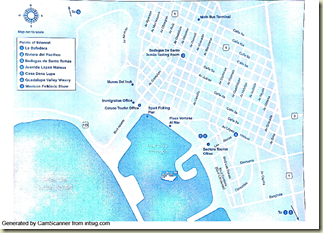 Local Information.  Ensenada has a population 414,000 and is located in Baja California.  When the Spaniards arrived in this area in 1539, they thought they had landed on an island inhabited by female warrior led by their Warrior Queen, Calafia.  And so was christened “California”.

We have covered a lot of territory on our round trip to the Islands.

It is getting warmer as we approach the Baja Coast.  And nary a cloud in the sky. 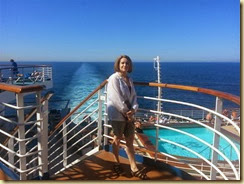 Arrival in Ensenada (a Jones Act Port) is scheduled for 4:00 PM but the Captain says we are going to be early and be alongside at 3:00 PM.  That gives everyone another hour in town (all aboard is 7:30 PM). 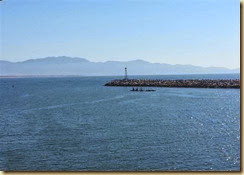 Grand Princess is docked at Ensenada Cruise Port Village, which is a 15 minute walk to the main shopping area along Avenida Lopez Mateos.  We joined a large group of passengers all bound for the same spot – the vendors and shops.  The port looks very new and looking back, I was able to get a nice picture of the Grand Princess docked.  Security at this port does not even come close to what we encountered in Hawaii. 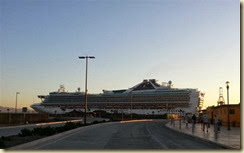 Since we were walking with a crowd, there had to be someone who could take our picture – voila – a photo together. 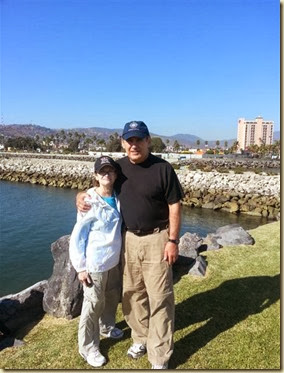 The walk to town is remarkable for several things – the little children who are selling wares and the parks and monuments.

One of the monuments is dedicated to the the Battle of Chapultepec – a fortress housing the Mexican Military Academy (during the Mexican-American War).  On September 13, 1847, the American army attached the Academy, where military cadets fought unsuccessfully defending the fortress, which guarded Mexico City. 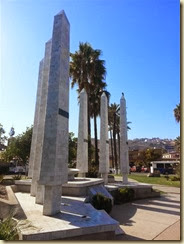 It was warm and clear and the walk was very pleasant.  The shopping area is a combination of old and new shops.  As always, we are on the lookout for some free Wi-Fi but there was none at either the Starbucks or McDonalds on the main street.  Restaurants had Wi-Fi but you needed to buy something to get access.  We noticed a very small restaurant just outside the big movie complex – Ellen did her magic and the owner gave us the Wi-Fi key without having to purchase anything.  We were able to catch up on everything.

We headed back to the ship and, on the suggestion of a fellow passenger, took a picture of the moon over the nearby mountain range. 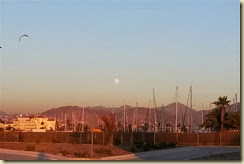 It was dark before the ship pushed…this gave me the opportunity to shoot a night time shot of Ensenada as well as a picture of Ellen and the city (off the aft end of the ship).  Watching the ship gun its engines for a straight-out departure from the port was really great.  The ship picks up pretty good speed quickly. 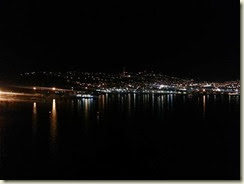 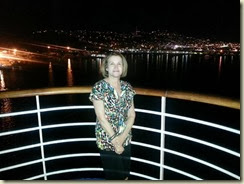 Tomorrow, another day at sea.